5 different types of Tawaf in Islam

‘Tawaf’ is an Arabic word that linguistically means ‘to encircle something’ or ‘to walk around.’ It is one of the most essential rites of both, the major pilgrimage (Hajj) and minor pilgrimage (Umrah).

In Islam, Tawaf means encircling the Holy Kaaba seven times in an anti-clockwise motion, ensuring that each round starts and ends at Hajar-Aswad (Black Stone). Keep reading to learn the types of Tawaf in detail.

Did you know that during the era of Jahiliyyah, the idolaters would perform Tawaf of the Kaaba while naked? According to them, this was the custom of their forefathers. Therefore, the polytheists would take off their clothes, throw them on the floor and circumambulate the Kaaba, letting them get trampled and torn under others’ feet.

The non-Muslims did so because they believed their clothes had become tainted by their sins, and dissociating themselves from their clothes was a way of purification.

Ibn Kathir (RA) writes: “The Arabs, with the exception of the Quraysh, used to perform Tawaf naked. They claimed they would not perform Tawaf while wearing the clothes they had disobeyed Allah in. As for the Quraysh, known as al-Hums, they used to perform Tawaf in their regular clothes. Whoever among the Arabs borrowed a garment from one of the al-Hums, he would wear it during Tawaf. And whoever wore a new garment would discard it, and nobody would wear it after him on completion of Tawaf. Those who did not have a new garment, or were not given one by al-Hums, would perform Tawaf while naked.  Women would also perform Tawaf while naked, usually at night. This was a practice that the idolaters invented on their own, following only their forefathers in this regard. They falsely claimed that what their forefathers did was, in fact, following the order and legislation of Allah.”

With the advent of Islam, Allah commanded the covering of the Awrah:

“O children of Adam, take your adornment at every masjid, and eat and drink, but be not excessive. Indeed, He likes not those who commit excess.” [Holy Quran, Surah al-A’raf, 7:31]

Ibn Kathir, explaining this verse, writes: “There were people who used to perform Tawaf around the House while naked, and Allah ordered them to take adornment, meaning, to wear clean, proper clothes that cover the private parts. People were commanded to wear their best clothes when performing every prayer.”

According to Islamic scriptures, a year before the farewell Hajj, Prophet Muhammad (PBUH) refocused Tawaf towards the worship of God and prevented the practice of performing Tawaf naked.

Abu Hurairah (RA) narrates: “In the year prior to the last Hajj of the Prophet (PBUH) when Allah’s Messenger (PBUH) made Abu Bakr (RA) the leader of the pilgrims, the latter (Abu Bakr (RA)) sent me in the company of a group of people to make a public announcement: ‘No pagan is allowed to perform Hajj after this year, and no naked person is allowed to perform Tawaf of the Kaaba.’”

Tawaf Qudum is carried upon arriving i

n Masjid al-Haram in Makkah, Saudi Arabia, by pilgrims travelling from outside the boundaries of Miqat. Also known as ‘Tawaf of Arrival,’ ‘Tawaf al-Tahiyyah’ (Tawaf of Greeting), performing Tawaf Qudum is mandatory for all pilgrims who arrive with the intention to perform Hajj al-Ifrad or Hajj al-Qiran before Wuquf on the 9th of Dhul-Hijjah.

One must carry out the rituals of Tawaf Qudum in the state of Ihram. However, performing Rami and Idtiba is a Sunnah.

Aisha (RA) narrated, “The first thing the Prophet Muhammad (PBUH) did on reaching Makkah, was the ablution and then he performed Tawaf of the Kaaba, and that was not Umrah (alone), (but Hajj-al-Qiran).” (Sahih al-Bukhari)

Tawaf al-Umrah is performed by pilgrims who have come to Makkah with the intention to perform Hajj al-Tamattu or Umrah outside of the Hajj season.

Hajj al-Tammattu is typically performed by Muslims living outside Saudi Arabia as they wish to perform both Hajj and Umrah at the same time.

Tawaf al-Umrah should be performed in the state of Ihram along with Rami and Idtiba. Pilgrims usually carry out the rituals of Tawaf al-Umrah while performing Umrah, after which they perform Sai. Note that your Umrah will be invalid without Tawaf al-Umrah.

Otherwise known as the ‘Farewell Tawaf,’ Tawaf al-Wida should be performed by pilgrims after completing the rites of Hajj and before leaving the city of Makkah. According to the Hanbali and Hanafi schools of thought, performing Tawaf al-Wida is Wajib (compulsory) in Islam, so skipping the ritual can nullify your pilgrimage.

It should only be performed by pilgrims travelling from outside the boundaries of Makkah. Tawaf al-Wida can be performed in regular clothes.

The Messenger (PBUH) of Allah SWT said, “Let none of you leave Makkah before making a Tawaf around the Kaaba, as the last of Hajj rites.”

Tawaf al-Ziyarah (Tawaf of Visitation) is performed by pilgrims on the 10th of Dhul-Hijjah after performing Qurbani (sacrifice of the animals), Halq, and Taqsir (shaving of head or trimming of hair) and leaving the state of Ihram.

Also known as Tawaf al-Ifadah (Tawaf of Pouring Forth), the Tawaf al-Ziyarah rituals should be carried out before leaving for Mina to perform Rami of the three Jammarats.

What is Nafl Tawaf?

Nafl Tawaf or ‘Voluntary Tawaf’ can be performed anytime by anyone, as many times as they want. Usually, people perform Nafl Tawaf when they make a wish inside Masjid al-Haram.

Performing Nafl Tawaf is one of the most sacred ways to make the most of your time during pilgrimage (Umrah or Hajj).

How to perform tawaf

Abdullah bin Umar (RA) narrates, “I heard the Messenger (PBUH) of Allah SWT say: ‘Whoever circles the Kaaba seven times (Tawaf) and prays two Rak’ahs will have a reward as if he has freed a slave. A man does not raise his foot and bring it back down except that ten good deeds will be written for him, ten bad deeds will be erased, and he will be raised by ten degrees.’” (Ahmad, Hadith No. 27862)

In another event, Prophet Muhammad (PBUH) said, “Whomsoever makes 50 Tawafs of the Kaaba (i.e., fifty by seven rounds), will be free of all his sins, just as the day his mother gave birth to him.” (Al-Tirmidhi, Hadith No. 866) 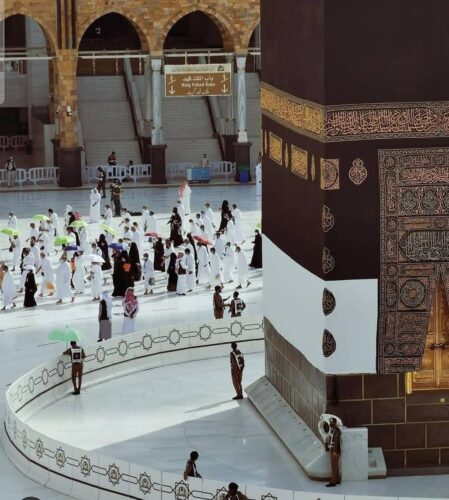 Tawaf is the act of circumambulating around the Holy Kaaba seven times. When performing Tawaf, a pilgrim starts from Hajar-e-Aswad (Black Stone) and encircles it in an anti-clockwise direction.

To make it easier, the Saudi government has installed a green light on the wall opposite the Holy Kaaba that indicates the starting point of Tawaf.

Recite the following verse to make the intention for Tawaf:

Translation: O Allah, I intend to perform Tawaf of the Sacred Mosque, so accept it from me and make it easy for me.

On completing the first round, one must perform Idtiba, kissing, touching, or saluting of Hajar-e-Aswad. After completing all seven rounds, pilgrims are directed to pray two rakahs of Nafl behind Maqam Ibrahim (Station of Ibrahim).

Which tawaf is known as the welcome Tawaf?

Tawaf Qudum is known as the ‘Welcome Tawaf.’ The pilgrims travelling from outside the boundaries of Miqat are obligated to perform this Tawaf as soon as they arrive in Makkah, Saudi Arabia.

The rituals of the Welcome Tawaf are performed before Hajj in the state of Ihram.

Tawaf is one of the most significant principal rites of pilgrimage (Hajj or Umrah). Tawaf refers to the act of walking in circles or circumambulating the Holy Kaaba seven times in an anti-clockwise direction and praying two Rakah behind the Station of Ibrahim (Maqam Ibrahim).

There are five types of Tawaf in Islam, each having its own set of rules and regulations: Tawaf Qudum, Tawaf al-Umrah, Tawaf al-Wida, Tawaf al-Ifadah, and Nafl Tawaf. May Allah SWT grant all of us the opportunity to visit His house (Holy Kaaba).