Qurbani, also known as Udhiyah, is one of the most significant religious practices in Islam. Every year in the month of Dhul Hajj, billions of Muslims worldwide perform the spiritual practice for the sake of Allah SWT. For those unaware of this ritual, Qurbani is the act of commemorating the sacrifice that Prophet Ibrahim (AS) was willing to make to Allah SWT by sacrificing his son Prophet Ismail (AS). Therefore, keeping in mind the history behind this sacred Islamic practice, it’s essential to follow proper guidelines and the Qurbani rules listed below:

And so, both Prophet Ibrahim (AS) and Prophet Ismail (AS) submitted to the will of Allah SWT as they set off on their journey to Mina. Upon reaching the location to see the sacrifice through, both father and son blindfolded themselves while preparing themselves to perform the brave act. Just then, Allah SWT miraculously replaced Prophet Ismail (AS) with a magnificent beast to be sacrificed instead.

“O Ibrahim, you have fulfilled the vision. Indeed, we thus reward the doers of good. Indeed, this was a clear trial.” (Holy Quran 37:104)

“And we ransomed him with a great sacrifice. And we left for him [favourable mention] among later generations of Peace be upon Ibrahim.” (Holy Quran 37:107)

Upholding the same spirit, Muslims worldwide commemorate the holy sacrifice of Prophet Ibrahim (AS) by sacrificing animals (livestock) between the 10th and 12th of Dhul Hajj.

Is Qurbani Compulsory or Sunnah?

According to the Hanafi school of thought, the act of Qurbani is considered Sunnah. Qurbani being an act of Sunnah means that Muslims who perform Qurbani will be highly rewarded, but if someone is unable to perform the holy sacrifice, it will not be considered a sin. However, if you are Sahib-e-Nisab (can give Zakat or donation), it is Wajib (compulsory) for you to perform Qurbani. However, Qurbani is obligatory on Muslims based on the following conditions:

How Much Is Qurbani?

A single Qurbani can be considered the sacrifice of either one large animal such as a cow or one small animal such as a sheep or goat. However, if you want to perform the Qurbani of a cow and don’t have enough money to buy a cow, you can also opt for a share in the large animal. However, in both cases, your obligation will be fulfilled, and Allah SWT will reward you.

It is obligatory for every eligible Muslim to provide one share of Qurbani. This means that if you are a parent, you should provide a share in the name of your children as well.

When talking about large animals such as cows or buffalos, they can be equally split into seven shares for seven individuals. However, small animals such as sheep or goats are equivalent to one Qurbani per person. Therefore, you should choose the animal based on the number of eligible people for Qurbani in your family.

How Many Qurbani per Family?

The Hadith reported by Abdullah bin Hasham states that, “Prophet Muhammad (PBUH) used to sacrifice one sheep for himself and his family.” However, according to the Hanafi scholars, the sacrifice of one goat or sheep only suffices for one family member. Therefore, for every family member whose wealth exceeds the amount of Nisab, one Qurbani should be performed. For example, if within the same house, both the son and father have sufficient wealth. In such a case, the family should perform two Qurbanis, not one.

Qurbani Rules for Husband and Wife

If the husband and wife aim to perform Qurbani, both should make their intention (Niyat) and keep from trimming their nails or hair from the start of Dhul Hajj until the sacrifice is made. The same process must be performed even if someone else is performing the sacrifice on their behalf. Also, the husband and wife should perform the Qurbani any time after completing Eid Prayer during the three days of Eid ul-Adha.

Moreover, the slaughter of the animal should only be performed either by the husband or any other man (Qasai). After the sacrifice has been made, it’s directed to the husband and wife to keep one-third of the animal themselves and eat it. However, the rest should be distributed equally as an aid among the poor, neighbours and family members. In many cases, selling Qurbani meat is strictly forbidden.

Is Qurbani Farz (Compulsory) for a Wife?

Qurbani rules for married couples state that a husband does not need to give a share on behalf of his wife if she has her own money, but can do so if he chooses to.

The scholars of Shari’ah have contradicting opinions when it comes to the rules of Qurbani for children. In some places, scholars have stated that it’s mandatory for a father to perform the sacrifice on behalf of his children, whereas it has also been said that Qurbani is neither Wajib (compulsory) on the father nor the child.

Therefore, after a lot of research and in reference to the Hadith, it can be stated that, “It is better if a father offers Qurbani on behalf of his child, from his wealth. Although it’s not Wajib, it’s better.”

What if I’ve Missed Qurbani? What Should I Do?

If you have missed performing the religious act of Qurbani due to some personal reasons, you can compensate this year by sacrificing an extra animal. You can also do this by simply calculating the number of years you were unable to perform Qurbani, and you will know how many animals you need to sacrifice to make up for the lost years.

As an alternate, you can also compensate for any missed Qurbani by giving donation of the market value of the livestock animals such as goat/sheep to poor Muslims.

Hair and Nail Rules for Qurbani

If you plan to perform Qurbani, it is strongly recommended that you not cut your hair or nails, starting from the 1st of Dhul Hajj till after the sacrifice, that is, 10th to 12th Dhul Hajj. This is because Prophet Muhammad (PBUH) said, “When the ten days (of Dhul Hajj) start, and one of you intends to sacrifice, then let him not cuts his hair or his nails.” (Sahih Muslim)

How to Slaughter the Qurbani Animal

It is considered more virtuous if a man slaughters the Qurbani animal with his own hands. However, if one doesn’t know how to perform the sacrifice, they must be present while someone else performs the sacrifice on their behalf.

When performing the sacrifice, it is compulsory to recite “Bismillahi Allahu Akbar” and the prayer of Qurbani. However, it is not necessary to make a verbal intention (Niyyah) as Allah SWT knows what’s inside your heart. When performing Qurbani, keep in mind the following rules: 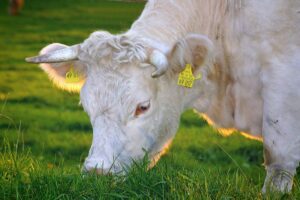 Once the Qurbani has been carried out, the animal’s meat should be distributed in three equal parts. The rules of giving meet are as follows:

When Is Qurbani Performed?

Which Animals Can Be Slaughtered for Qurbani?

Only livestock animals are considered eligible for Qurbani purposes. However, each animal should be of a required age to be sacrificed. Moreover, the animal bought for Qurbani shouldn’t be injured, sick or pregnant (in the case of females). Listed below are the age requirements that you must check before sacrificing:

Although a six-month-old sheep is eligible to be sacrificed if it’s healthy enough, it’s preferable the sheep should be at least one year old. Also, the sacrifice of a sheep is equivalent to one person.

The sacrifice of a goat is also equivalent to one person. The goat should be at least a year old to be eligible for Qurbani.

Having seven shares within itself, the Qurbani of a cow is equivalent to seven people. However, the cow should be at least two years old in order to be sacrificed.

A buffalo should be a minimum of two years old to be sacrificed. However, the sacrifice of a buffalo is equivalent to seven persons’ Qurbani shares.

Also comprising seven Qurbani shares, a camel should be at least five years old to be eligible for the sacred sacrifice.

The spiritual and religious act of Qurbani will undoubtedly bring you closer to Allah SWT. Even today, Muslims worldwide perform the obligatory act of the annual sacrifice to commemorate the willingness of Prophet Ibrahim (AS) to sacrifice his son Prophet Ismail (AS) for the sake of Allah SWT.