What is Tawaf in Islam | Complete Guide

Whether you’re a recent convert or born Muslim planning to perform Hajj or Umrah, obtaining an in-depth understanding of the term ‘Tawaf’ is crucial. Every time you proceed to the house of Allah t for performing either greater or lesser pilgrimage, you’ll be required to deliver Tawaf. You should thus take the time to learn what exactly it means, why it is important, what are its different types, how is it performed, and more. In this guide, we’ll let you know everything you need to know about Tawaf. Let’s begin with what is Tawaf:

What Does Tawaf Mean?

The term ‘Tawaf’ is derived from the Arabic verb ‘Taafa’, which means ‘to encircle something’ or ‘to walk around something’. In the Islamic context, Tawaf refers to taking rounds or encircling the Holy Ka’abah seven times in an anti-clockwise direction as part of Umrah or Hajj, starting from Hajr-al-Aswad (the black stone). It’s among the most significant obligations of both Hajj and Umrah, without which the greater and minor pilgrimage would be incomplete. When performing Tawaf, pilgrims recite Takbir and various other supplications based on the Sunnah of the Prophet s.

Why is Tawaf Important? 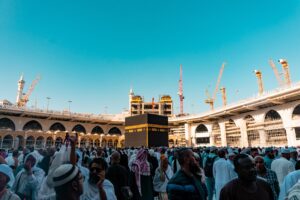 The Tawaf is not just a practice of worship but also an act of devotion that brings the pilgrim closer to Allah. It demonstrates the unity of God’s believers and servants who pay a visit to His home from all over the world. As mentioned earlier, no Umrah or Hajj is complete without the performance of Tawaf. It’s important to note here that encircling the Holy Ka’abah doesn’t mean Muslims worship the Ka’abah. Instead, they worship the being that owns the Ka’abah, that is, Allah.

Let us take you through several interpretations that emphasize the importance of Tawaf:

The Circular Motion of the Universe: The act of Tawaf is also a reflection of the orbiting motions of the heavenly bodies of this universe. You probably already know that the moon revolves around the earth, completing a revolution in a month, while the earth in turn revolves around the sun, completing a revolution in a year. Interestingly though, this circular motion extends well beyond our solar system. From the tiniest atoms to the largest galaxies, everything in this universe has been discovered to be revolving around a central point.

According to scientific research, the electrons inside a given atom orbit its nucleus or the core in an anti-clockwise direction. Amazingly, some atoms are so small that you can’t even see them via a microscope. Since everything is composed of atoms, every creation is in a constant orbital movement around a central point, as per the will of Allah. This is the unchanging, cosmic law of the universe. Not only has Allah created the entire universe, but He has also set up this entire system.

The act of Tawaf is a reflection of this cosmic law, with the Holy Ka’abah being the spiritual center of the world. The House of Allah is supposed to be the spiritual axis around which a Muslim’s compass rotates. Allah Ta’ala Himself regards the Holy Ka’abah as a Sacred House, serving as a symbol of the human encounter with the Supreme being. Just as all matter in this universe stays in a constant circular motion around a center, Tawaf is a continuous, 24-hour practice that doesn’t stop except for the five obligatory prayers. Like every orbit has one center, the act of Tawaf represents the worship of One God, Allah, none other than whom is worthy of worship.

Why Do Muslims Do Tawaf 7 Times?

Tawaf is an act of worship and regardless of the type of worship we perform, we do not ask why there are to be performed in a certain fashion. We simply perform them because God commanded us and in a way prescribed and taught by the Holy Prophet s.

We believe that Allah Ta’ala possesses infinite wisdom, which is why He never orders anything unwise, but we don’t necessarily need to know the science behind every command. For certain practices, Allah Ta’ala has disclosed the cause; for others, He hasn’t. And we’re expected to obey every command, without getting into the roots. For example, it’s obligatory to pray five times a day and fast for 30 days during the month of Ramadan. Why we need to perform them isn’t important.

Having said that, the purpose of Tawaf is to represent the notion that our lives should revolve around remembering and staying obedient to Allah Ta’ala. By performing Tawaf, we reinforce the centrality of the spiritual focus that we face while performing the daily prayers.

The practice of Tawaf also connects us with the tradition of one of Allah’s most beloved Prophets, Prophet Ibrahim (Abraham) e. He, along with his son, Prophet Ismail e, took part in the reconstruction of the Holy Ka’abah. Right after the completion of Tawaf, pilgrims head to Maqam-e-Ibrahim (the station of Abraham) and perform Salah there.

While these are some identified causes for the performance of Tawaf, there the reason for the frequency ‘seven’ remains unknown. We follow that frequency in obedience to the commands of Allah Ta’ala and the practice of the Holy Prophet s.

What is the Difference Between Tawaf and Tawaf Al-Qudum?

While we’ll discuss the five different types of Tawaf later in the guide, let’s go through the basic difference between Tawaf Al-Qudum and the rest of the types of Tawaf. Keep in mind that the procedure to perform all types of Tawaf remains the same. The only differentiating aspect is the intention or niyat you make before performing Tawaf.

Tawaf Al-Qudum refers to the initial Tawaf that’s performed by pilgrims as soon as they enter Masjid Al-Haram with the specific intention of performing Hajj Al-Ifrad or Hajj Al-Qiran. Pilgrims must be in a state of Ihram when performing this Tawaf. As per the Prophet’s s Sunnah, male pilgrims should observe Idtiba and Raml when performing the Tawaf.

Tawaf Al-Qudum is similar to Tahiyyat Al-Masjid, the salah performed to greet the Mosque. The Tawaf is meant to greet the House of Allah. In contrast, when you arrive in Makkah with the intention to perform Umrah only, you perform Tawaf Al-Umra upon entering Masjid Al-Haram instead of carrying out Tawaf Al-Qudum. Other types of Tawafs are performed at different times during or after the Hajj or as standalone Tawafs. (We’ll take a look at them in detail later in the guide.)

How to Perform Tawaf?

The method to perform different types of Tawaf stays the same. We’ll take you through the steps to perform Tawaf, as prescribed by the Holy Prophet s:

Duas to Recite During Tawaf 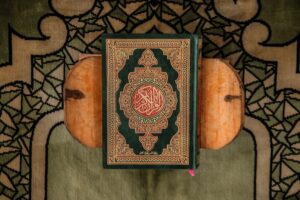 During your Tawaf, you may recite various duas, supplications, and prayers. Once your Umrah package is finalised, you should spend the bulk of your time learning the various duas to recite on Umrah. Tawaf is one of the acts of worship when duas are accepted. It’s not necessary to pray in Arabic; you may pray in your own language. However, it’s highly recommended not to miss the duas that the Prophet s used to pray. Here are some duas to recite during the Tawaf, as prescribed by the Sunnah of the Prophet s:

Dua 1: When commencing your Tawaf while facing Hajr Al-Aswad, recite the following dua after you’ve made your intention:

Translation: I begin in the name of Allah, Allah is the Greatest, and all Praise be to Allah.

Dua 2: Each time you walk between the Yemeni corner of the Holy Ka’abah and Hajr Al-Aswad, recite the following dua:

Translation: O our Lord! Grant us the best in this life and best in the hereafter, and protect us from the punishment of hellfire.

Depending on whether you aim to perform Umrah or Hajj and the step at which you are while performing a ritual, there are five different types of Tawafs you can perform, which are all performed in the same manner. They include:

Tawaf Al-Qudum is the initial, greeting Tawaf performed by any Muslim who decides to perform Hajj Al Qiraan or Hajj Al-Ifraad. You must be wearing Ihram during this Tawaf and males should observe Raml and Idtiba. Pilgrims arriving for Hajj al-Ifraad and Hajj Al-Qiraan must perform this Tawaf any time before 9th Dhul Hijjah, the day of staying at Arafat.

This type of Tawaf is carried out by those heading to perform Hajj Al-Tamattu or a standalone Umrah outside of the Hajj Season. Hajj Al-Tamattu is performed by pilgrims who live outside Saudi Arabia and intend to perform both Umrah and Hajj together. They first perform Umrah, during which Tawaf Al-Umrah is carried out, and then proceed to Hajj. Again, the pilgrim should be wearing Ihram while performing this Tawaf, and Idtiba and Raml are observed by male pilgrims. After Tawaf al-Umrah and the associated two rakats Salah, pilgrims perform Sa’i.

Also known as Tawaf-al Ifadah, Tawaf-al Ziyarah is performed on the 10th of Dhul Hijjah by Hajj pilgrims, prior to returning to Mina to carry out Rami Al-Jamarat (Stoning the satan). Since pilgrims leave the state of Ihram after Halq (shaving the head or cutting the hair), this Tawaf is performed in ordinary clothing. However, marital relations are still prohibited until you complete Tawaf Al-Ziyarah.

Tawaf al-Widah is performed by Qiraan, Ifrad, and Tamattu Hajj pilgrims right before leaving Makkah after the completion of their Hajj. You need not be in the state of Ihram to perform this Tawaf; it can be performed in regular clothing.

Like Nafl Salah, this type of Tawaf is a voluntary tawaf that anyone can perform as many times as they like, any time. While staying in Makkah for any reason, you should make the most out of your free time by engaging in Nafl Tawaf.

Once your Tawaf is complete and you’re done with the two rakats of Salah al-Tawaf, proceed to the well of Zamzam to obtain Zamzam water.

What is Tawaf Summary

To sum it up, Tawaf is a mandatory step in Umrah and certain types of Hajj. It basically refers to the act of circumambulating the Holy Ka’abah in Masjid al-Haram in reverence to God. The importance of Tawaf can be judged by the fact that it connects you with Allah, reflects every orbiting matter in this universe, forms a necessary step in greater and lesser pilgrimage, and more.

Performing Tawaf is not complicated, but make sure you are aware of the prerequisites such as Ihram in certain types of Tawaf, purity requirements, and the dos and don’ts of performing the ritual. Also, there are five different types of Tawafs. Before heading to Hajj or Umrah, be sure to obtain a clear understanding of the types applicable to you.

We hope you enjoyed the insights in this article about Tawaf. Stay tuned for more valuable information.