How to wear Ihram

If you’re proceeding to Makkah to perform Hajj or Umrah, you should be aware of the steps involved in wearing Ihram as well as the rules associated with it. Here is everything you need to know about how to wear Ihram:

What is Ihram in Islam?

As opposed to the common belief that Ihram is merely a type of clothing, it’s rather a sacred state in which Muslim pilgrims enter and stay in while performing the divine rituals of Hajj and Umrah. Entering the sacred state requires you to perform certain cleansing acts and wearing the right dress. Without entering the state of Ihram, there’s no way an individual can perform Hajj or Umrah. 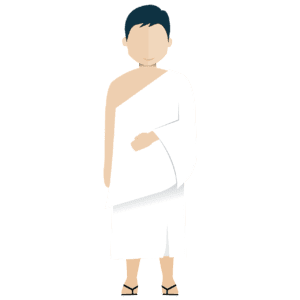 When you fly to Makkah to perform Hajj or Umrah, you must enter the state of Ihram on the plane at a location outside the city. This will typically be a place about an hour and a half before you enter Makkah. Since you’ll be notified about this place via announcement, you need not worry about tracking the location on Google maps. There are more than one meeqats and which one is relevant to you depends on where you’re coming from.

Upon reaching the meeqat, men should follow these steps to enter the state of Ihram:

The most important step in entering Ihram is making the intention for it, which is when you actually enter the state of Ihram, regardless of when you put on the Ihram clothing. In the case you forget to enter the state of Ihram at a Meeqat, you’ll either need to go back to one of the meeqat and make the intention or pay the penalty by sacrificing a sheep in the way of Allah.

Also, if you’re flying to Makkah, you obviously won’t be able to make the preparations discussed above such as taking a bath and making other preparations. Therefore, it’s best to carry out these preparations before leaving home and all you need to do upon reaching meeqat is to make the intention for entering the state of Ihram.

Why is the Ihram important for Muslims?

The idea behind Ihram is to establish total equality among those paying a visit to the house of Allah. It eliminates all differences associated with societal status and wealth and renounces the temptations of self-admiration among both men and women. The uniformity and simplicity of Ihram make it hard to differentiate the rich from the poor and rules from ordinary people. It’s also meant to be a reminder of the shroud we all will be covered in when we depart from this world.

What is Ihram for ladies?

Women’s Ihram is different from that of men. It supposed to a loose robe covering the entire body. Unlike men’s Ihram, in which a shoulder needs to be exposed when performing tawaf, Women’s Ihram involves complete coverage of their bodies at all times.

The loose-fitted robe may have buttons or seams, but it must be free of colours of adornments. It must either be white or black. Women’s hands should remain exposed and they aren’t permitted to wear niqabs to cover the face. If a woman chooses to keep their face veiled, they can wear a hat that keeps the veil away from their face while also keeping it covered. Also, women pilgrims need to use footwear that covers their entire feet. 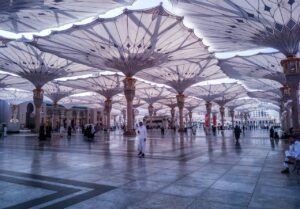 As soon as you enter the state of Ihram, you won’t be allowed to perform the following actions:

Regardless of whether you wish to perform Umrah or Hajj, you must abide by the above-explained Ihram rules. Violating a single rule can result in a severe penalty such as Dam, which refers to the sacrifice of a goat or sheep. Penalties can vary depending on the number of rules you violate and whether it was committed by mistake or is a result of gross negligence. That’s why you’ll need to ask a lot of questions from Islamic scholars before heading to Umrah or Hajj as well as carry relevant guidance books with you.

Can You Wear a Belt With Ihram?

Can You Wear Boxers Under Ihram?

Since the use of sewn clothes is prohibited while in the state of Ihram, it is not permissible for pilgrims to wear boxers or any other type of undergarments at this time.

To sum it up, Ihram is a type of uniform worn by pilgrims when proceeding to the lesser pilgrimage (Umrah) and the greater pilgrimage (Hajj). All pilgrims need to understand that wearing Ihram is not optional. Anyone proceeding to Makkah for performing these rituals must enter the state of Ihram at one of the Meeqats. Use the steps mentioned in this guide to understand how to wear Ihram and familiarize yourself with the restrictions associated with the state of Ihram. We truly hope that you end up getting everything right with the Ihram.