What is Mina during Hajj? Everything You Need To Know

Situated about 5 miles or 8 kilometres in the eastern direction of Masjid al-Haram in Makkah, Saudi Arabia, Mina is a valley surrounded by mountains. With regards to historic Islamic landmarks, the famous area of Mina is specially called out during the Islamic month of Dhul Hijjah. This is because pilgrims from all over the world spend the nights of the 8th, 11th and 12th Dhul Hijjah at Mina, and occasionally the night of 13th Dhul Hijjah as well. Mina Hajj is also a significant symbol for the stoning ritual as it is the place where the three stone pillars of the Jamarat are situated. Read on to learn more about Mina Hajj and its significance in Islam.

What Does “Mina” Mean?

Derived from the word with the root letters ma-na-ya, Mina literally means ‘to find’ or ‘to undergo test’ or ‘to be put to the test.’ Further onwards, the term Mina is connected to the words ‘tamannd’ and ‘manna’, which means ‘to hope for’ or ‘awaken a desire.’

When we talk about Islamic history, like everything else, there is a story behind the name Mina. It is believed that the valley of Mina is connected to the test that Prophet Ibrahim (AS) had to undergo when Allah SWT commanded him to sacrifice his only son, Prophet Ismail (AS). However, by the command of Allah SWT, a lamb miraculously appeared between the blindfolded Prophet Ibrahim (AS) and his son and was sacrificed instead.

Therefore, the name “Mina” was given to the place, implying the “place where he succeeded” and the “place where he was tested.” Moreover, the word “Mina” also means “to flow” as it was the place where during Hajjat-ul-wada (the Farewell Pilgrimage), Muslims along with Prophet Muhammad PBUH sacrificed a hundred camels. Therefore, following the Sunnah, even today, pilgrims perform the sacrifice of animals at Mina during the religious festival of Eid ul-Adha.

Why Is Mina Important During Hajj? 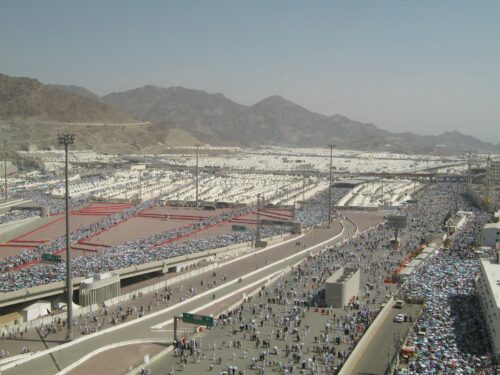 According to Islamic teachings, there are specific religious practices and Sunnah of Prophet Muhammad PBUH that must be performed during the period of Hajj. Muslims are instructed to spend the nights of the 8th, 11th and 12th Dhul Hijjah at Mina. After the completion of tawaf (circumambulation), Hajj pilgrims are instructed to return to Mina Hajj.

The pilgrims then travel to Mina either by bus or via foot. Upon reaching the blessed destination, pilgrims spend a full day and night in the tents situated at Mina. This event is commonly referred to as Layali al Tashriq.

During their stay at Mina Hajj, pilgrims read the Holy Quran, offer prayers, worship Allah SWT, perform Zikr and listen to Islamic lectures all night. Following the break of dawn, Muslims are instructed to exit Mina and move towards Mount Arafat.

What Happens at Mina?

On the third day of Hajj, Muslims are instructed to move before sunrise to the sacred area of Mina to conduct the ritual of Stoning the Devils or Rami. For this ritual, pilgrims collect pebbles a day in advance, and they throw these pebbles at any of the three stone pillars standing in Mina. The stone structures are called the Jamarat.

The significance of the Stoning of Devil revolves around the historical incident when Satan tried to persuade Prophet Ibrahim (AS) into disobeying the command of Allah SWT to sacrifice his only son. Therefore, throwing pebbles at the three Jamarat signifies Prophet Ibrahim’s (AS) strong faith and his rejection of Satan’s attempt at manipulation. Therefore, the specific ritual is considered the most risky and emotionally gratifying experience of the Hajj. After Rami, pilgrims conduct the ritual of sacrifice, followed by distributing the meat to the underprivileged and poor.

How Long Is Mina?

Located at the eponymous Mina valley, Mina Hajj is at an elevation of approximately 1230 ft (400m). Mina is bordered by the 4th Ring Road at the north, the district of Makkah at the west, the Al-Jamaih district to the south and Muzdalifah to the east. Starting from Makkah’s city centre to Muzdalifah, the valley of Mina covers around 16.8 kilometres.

The second Jamarat symbolizes the temptation of the wife of Prophet Ibrahim (AS), Hajrah (AS), against their son’s sacrifice.

And the third Jamarat signifies the temptation of Prophet Ismail (AS) against getting sacrificed. Thus, the act of Rami signifies the shunning of a Muslim’s self-esteem to attain closeness to Allah SWT, just like Prophet Ibrahim (AS) threw seven stones at Satan to defy his manipulation. However, the stubborn Satan appeared twice again after that, and every time he appeared, Angel Gabriel (AS) urged Prophet Ibrahim (AS) to pelt stones at him.

Mina Mentioned in the Holy Quran 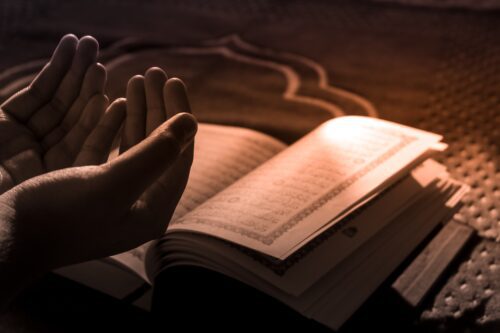 Mina Hajj is mentioned in Surah Al-Baqarah in the Holy Quran as follows: “And remember Allah during [specific] numbered days. Then whoever hastens [his departure] in two days – there is no sin upon him, and whoever delays [until the third] – there is no sin upon him – for him who fears Allah. And fear Allah and know that unto Him you will be gathered.” [Holy Quran, 2:203]

Some little-known facts about Mina Hajj are mentioned below:

Mina is also known as the “City of Tent.” To provide temporary accommodation to over 3 million pilgrims who take part in Hajj every year, the Saudi government has installed more than 100,000 air-conditioned tents in the 20 km2 area of Mina.

Little do people know that there lies a cave in Mina known as “Cave of Mursalaat.” This was the place where Surah Mursalaat was revealed to Prophet Muhammad PBUH.

According to Seerah an-Nabawiyyah, it was Mina Hajj where the event of the First Pledge took place, and a group of twelve men from Madinah accepted Islam. The First Pledge stated the following conditions; not to associate partners with Allah SWT, not to commit adultery, not to steal, not to kill children, not to be disobedient (when commanded), to do a good deed and not to bring false statements upon one another (fellow Muslim men and women).

The valley of Mina marks the turning point and revolution of Yathrib, which is now known as the luminous city of Madinah. Thus, it is believed that if a Muslim takes a similar pledge at Mina, the blessings of Allah SWT will be showered upon them, and they will take a turn towards a more spiritual and religious journey that will last a lifetime.

Otherwise known as the City of Tent, Mina is a valley surrounded by mountains. It is located on the eastern side of Makkah, Saudi Arabia. The valley of Mina holds great significance in the Islamic ritual of Hajj and Umrah. During Dhul Hijjah every year, around 3 million pilgrims come to stay in the 100,000 tents located there.