Umrah, the lesser pilgrimage, is a beautiful spiritual journey taken by Muslims to seek the blessings of Allah SWT, commune with Him to purge the impurities within, and acknowledge the Almighty as the harbinger of peace. Therefore, when any pilgrim goes for Umrah, they are on their way to purify their mind, heart, body, and soul from past sins in order to be differentiated from others on the Day of Resurrection.

For Prophet Muhammad (PBUH), Umrah is one of the most delightful Islamic rituals and the best way to commit oneself to Allah SWT and repent for all of our sins. The Messenger (PBUH) of 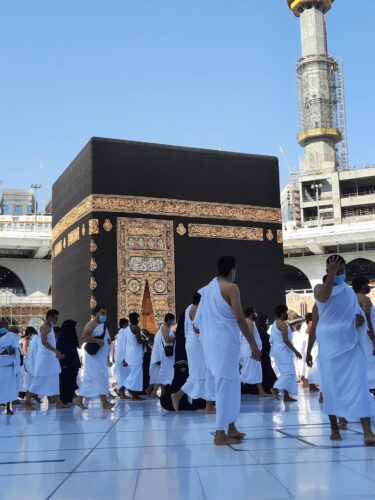 Did you know that there are two types of Umrah? The first one is Umrah al Mufradah which can be practiced any time during the year. On the other hand, Umrah al Tammatu, a co-joined obligatory Hajj ritual, can only be performed in the month of Dhul-Hijjah.

However, the primary purpose behind both Umrahs is the same: they are meant to cleanse one’s soul and bring one closer to Allah SWT. Keep reading to learn more about the two different types of Umrah.

Umrah is an essential Islamic ritual and can be performed anytime throughout the year. However, if you plan to perform Umrah al Mufradah, the holy months of Ramadan and Rajab are considered the ideal time to perform this type of Umrah.

On the other hand, Umrah al Tammatu can only be performed during Hajj. This year, Hajj is expected to start from 7 July 2022 until 12 July 2022. Note that the dates might vary depending on the sighting of the moon.

What Are the Two Types of Umrah?

The word “Umrah” belongs to the roots of the Arabian dictionary, which means “to visit” the Holy Kaaba, the House of Allah SWT in Makkah, Saudi Arabia.

As stated earlier, unlike Hajj, which is obligated to be performed within the first ten days of the Islamic month of Dhul-Hijjah, Umrah can be performed any time of the year, depending upon a person’s schedule and needs.

Umrah was one of Prophet Muhammad’s (PBUH) most beautiful Sunnah as it gives one the chance to break free from the materialistic world and get closer to Allah SWT to attain tranquility and peace. The beloved Messenger (PBUH) of Allah SWT, while stating the significance of Umrah, said, “Umrah is the atonement of all sins.” For intending pilgrims, it is important to know the two different kinds of Umrah, their rituals, timings, and rewards.

Being connected with Hajj, Umrah al Tammatu can only be performed in the last month of the Islamic calendar, Dhul-Hijjah. Because Umrah al Tammatu is dependent on Hajj, it is a compensation to perform it with fellow pilgrims.

Note that there is no difference in the procedure of both type of Umrahs. In both Umrah ul Tamattu and Umrah ul Mufradah, it is obligatory to assume Ihram at the lines of Meeqat. Moreover, if a person is in Makkah and intends to perform Umrah ul Mufradah, it’s permissible for them to come out of Masjid Al-Haram to get into Ihram and make niyat. Here is a complete guide on the two different types of Umrahs.

The independent pilgrimage, Umrah al Mufradah, can be practiced anytime throughout the year except for the days of Hajj. It is a voluntary pilgrimage and can be performed on an individual basis.

Umrah ul Mufradah is obligated upon the ones who are financially and physically capable. One can go for Umrah ul Mufradah in the holy months of Rajab and Ramadan, as they are considered the two most blessed months.

To perform Umrah al Mufradah, one must first enter the state of Ihram before crossing the boundaries of Meeqat. Upon reaching Masjid Al-Haram, the individual should make Wudu in order to prepare themselves to perform Tawaf in an anti-clockwise direction.

Once all the seven rounds are completed, the person is directed to walk towards Maqam-e-Ibrahim to pray two rakats and drink water from the Zamzam well.

After this, Sai is performed by walking seven times between Mount Safa and Marwa. To formally end Umrah ul Mufradah, pilgrims gather in Masjid Al-Haram, pray Nafl, and conduct the acts of halq or taqsir.

Umrah al Tammatu can only be practiced during the days of Dhul Qadah, Shawwal, and Dhul-Hijjah but before the commencement of the rituals of Hajj, which is the 8th of Dhul-Hijjah. Umrah al Tammatu is to be performed in the form of groups along with other pilgrims.

Note that a pilgrim cannot leave Makkah after completing Umrah al Tammatu and before completing the ritual of Hajj. Many Muslims find intending to go on pilgrimage in the month of Dhul-Hijjah as they can perform both Hajj and Umrah in the same month at the same time without worrying about planning two different trips.

Though all the rituals of Umrah al Tammatu (begin at Ihram at Meeqat, perform Tawaf, pray two rakats, drink Zamzam water, and perform Sai) are similar to Umrah al Mufradah, the most significant difference is that it is performed in groups. Another thing that distinguishes Umrah al Tammatu is that pilgrims are advised to perform taqsir instead of halq, as shaving of the head is an essential ritual of Hajj.

How to Perform Umrah for Ladies

Like men, women can also undertake Umrah. However, there are specific predefined rules that a woman must comply with when performing Umrah. First of all, women cannot go and perform and complete Umrah without a Mahram.

The Islamic rule dictates that a mahram is a Muslim male who is associated with a woman after marriage, through breastfeeding, or by blood. A woman must cleanse her body and wear Ihram before making the intention for Umrah.

She must recite Talbiyah before entering Meeqat. Unlike men, women are directed to walk at a slow pace when performing Tawaf. After Tawaf, she should pray two rakats at the Station of Ibrahim, drink water from the Zamzam well and make dua.

The pilgrim women must then walk out of Masjid Al-Haram towards the mountains of Safa and Marwa to perform Sai at a graceful, slow pace. After the seven rounds of Sai, like everyone else, women are commanded to gather in Masjid Al-Haram and offer Nafl and perform taqsir at Mina.

Performing Umrah for the elderly can be a challenge as it requires great strength and patience. Therefore, it is advised that if a person ages over 65 years, they should consider scheduling their trip based on their medical and physical condition.

Another way here is to ask someone else to perform Umrah on their behalf. Anas ibn Malik (RA) reported that Prophet Muhammad (PBUH) said, “If a young man honors an elderly on account of his age, Allah appoints someone to honor him in his old age.” (At-Tirmidhi)

Performing Umrah in the holy month of Ramadan carries immense religious value. Being considered the Minor Pilgrimage, Allah SWT showers his blessings upon the one who performs Umrah with a pure intention. On the other hand, Ramadan is regarded as one of the most sacred months.

Therefore, by performing Umrah in Ramadan, one gets a double reward. The significance of Umrah during Ramadan can be understood by the following narration of Ibn Abbas (RA):

“When the Prophet Muhammad (PBUH) returned after performing his hajj, he asked Umm Sinan Al-Ansari, “What did forbid you to perform Hajj?” She replied, “Father of so-and-so (i.e., her husband) had two camels, and he performed Hajj on one of them, and the second is used for the irrigation of our land.” Prophet (PBUH) of Allah SWT said (to her), “Perform Umrah in the month of Ramadan, (as it is equivalent to Hajj or Hajj with me (in reward).” (Sahih Bukhari – Book 29, Hadith 86)

Every year, countless Muslims visit the Holy Kaaba in Makkah, Saudi Arabia, to perform Umrah to seek mercy, pray, and restore their faith. Even though both types of Umrah – Umrah al Mufradah and Umrah al Tammatu – are different, the rituals are the same.

Therefore, if you get a chance, go for Umrah and perform the Umrah rituals according to the Sunnah of Prophet Muhammad (PBUH). Also, don’t forget to acknowledge the fact that being given a chance to perform Umrah is a blessing bestowed by Allah SWT, so make sure to practice the ritual with the purest intentions.