Located in Makkah, Saudi Arabia, Masjid Al-Haram is one of the oldest and biggest mosques ever built in history. It is also known as the Grand Mosque and the Great Mosque. Every year, thousands of Muslims gather in Masjid Al-Haram to pray (Salah) and perform Tawaf during Hajj and Umrah.

The world’s greatest mosque is never empty, and every sight of it is spellbinding. During the day, sunlight glimmers on the white marble floors of the Haram Mosque, and it is flooded by illuminating minarets and aesthetic lights during the night. Here is everything you need to know about Masjid Al-Haram and its significance in Islam.

The Great Mosque of Mecca 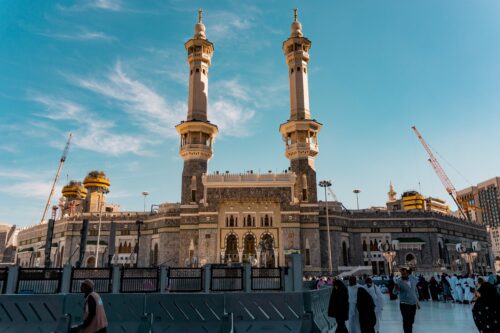 “And from wheresoever, you start forth (for prayers), turn your face in the direction of Al-masjid-al-haram (at Makkah), and whosesoever you are, turn your faces towards, it (when you pray) so that men may have no argument against you except those of them that are wrong-doers, so fear them not, but fear Me! – And so that I may complete My Blessings on you and that you may be guided.” [Holy Quran, 2:150]

“O you who believe [in Allah’s Oneness and in His Messenger (Prophet Muhammad (PBUH))]! Verily, the Mushrikun (polytheists, pagans, idolaters, disbelievers in the Oneness of Allah, and in the Message of Prophet Muhammad (PBUH)) are Najasun (impure). So let them not come near Al-masjid-al-haram (at Makkah) after this year, and if you fear poverty, Allah will enrich you if He will, out of His Bounty. Surely, Allah is All-Knowing, All-Wise.” [Holy Quran, 9:28]

Properly, Masjid Al-Haram was first constructed during the reign of Caliph Omar Ibn al-Khattab (634-644). Since then, Masjid Al-Haram has gone through several renovations and expansions. The current structure of Masjid Al-Haram dates back to 1571 AD, the rule of Ottoman Sultan Selim II. Followed by King Fahad, in the early 1950s, King Abdul Aziz Saud planned the expansion of Masjid Al-Haram in order to increase its capacity. Today, the structure that we see was renovated by King Salman, who expanded the Northern section and added air conditioners to enclosed areas. 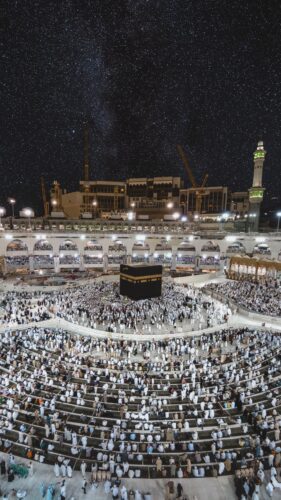 The current structure of Masjid Al-Haram covers an area of 400,800 sq. metres which can accommodate approximately 4 million Muslim worshipers during Hajj or Umrah.

Want to know some lesser-known facts about Masjid Al-Haram? Read on to find out!

Fact 1: Masjid Al-Haram is the largest mosque in the world

Being the focal point of every Muslim and is the largest Mosque in the world, Masjid Al-Haram can host up to 4 million worshippers at once.

Masjid Al-Haram covers an area of approximately 400,800 sq. metres, including the indoor and outdoor praying spaces. Masjid Al-Haram comprises nine minarets, each of these minarets is 89 metres (292 feet) above the ground. There are 210 gates of Masjid Al-Haram, allowing the entrance of pilgrims from all sides.

Fact 3: Masjid Al-Haram‘s Role in Fulfilment of the 5th Pillar of Islam

Masjid Al-Haram is home to many monuments and places that hold great significance in Islam. These include the well of Zamzam, the Holy Kaaba (House of Allah SWT), Hajr e Aswad (Black Stone), the hills of Safa and Marwa, the Station of Ibrahim, Hijre Ismail (Hateem), and Multazam. Every year millions of Muslim pilgrims visit Masjid Al-Haram to perform Umrah and fulfil the obligation of the 5th pillar of Islam- Hajj.

In Islamic history, there are many hadiths that highlight the significance of Masjid Al-Haram. In Jami Al Tirmidhi Hadith No 326, Abu Sa’eed Al-Khudri narrated that: Holy Prophet Muhammad (PBUH) said: “The mount is not saddled (for a journey) except to three Masajid: Al-Masjid Al-Haram, this Masjid of mine, and Masjid Al-Aqsa. [Sahih Hassan]

In another place, Hazrat Abu Hurairah (AS) narrated that the Prophet Muhammad (PBUH) said, “A prayer in this mosque of mine is a thousand times greater than a prayer in other than it, except for the Masjid Al-Haram.” [Imam Bukhari]

Fact 5: Masjid Al-Haram Is Mentioned 15 Times in the Holy Quran 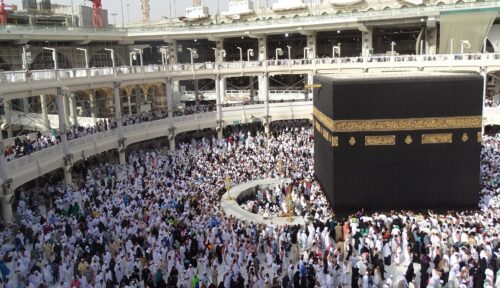 Masjid Al-Haram surrounds the Holy Kaaba, the direction of the Qibla for Muslims worldwide. The significance of Masjid Al-Haram can be understood by the fact that it is mentioned 15 times in the Holy Quran.

“And kill them wherever you find them, and turn them out from where they have turned you out. And Al-Fitnah is worse than killing. And fight not with them at Al-masjid-al-haram (the sanctuary at Makkah) unless they (first) fight you there. But if they attack you, then kill them. Such is the recompense of the disbelievers.” [Holy Quran, 2:191]

“Indeed Allah shall fulfil the true vision which He showed to His Messenger (Prophet Muhammad PBUH) saw a dream that he has entered Makkah along with his companions, having their (head) hair shaved and cut short] in very truth. Certainly, you shall enter Al-masjid-al-haram; if Allah wills, secure, (some) having your heads shaved, and (some) having your head hair cut short, having no fear. He knew what you knew not, and He granted besides that a near victory.” [Holy Quran, 48:27]

Some of the most critical landmarks near Masjid Al-Haram are as follows:

Bait ul-Allah, the Holy Kaaba, is the focal point of pilgrimage (Umrah and Hajj) and of Muslim prayers (Salah). It is located in the centre of Masjid Al-Haram. The Holy Kaaba is a cuboid-shaped structure. The Holy Quran contains several verses related to the Holy Kaaba, regarding it as the first house of worship that was constructed by Prophet Ibrahim (AS) and Prophet Ismail (AS).

Situated on the eastern corner of the Holy Kaaba and within the boundaries of Masjid Al-Haram, Hajar e Aswad is a sacred stone. Otherwise known as the Black Stone, Hajr e Aswad has a special place in Islamic history. It is believed to be a stone from heaven that came to earth with Prophet Adam (AS) and his wife, Hawa. Hajr e Aswad has a significant role in the rituals of Hajj and Umrah as following the Sunnah of Prophet Muhammad (PBUH), pilgrims perform the act of touching or kissing the Black Stone. 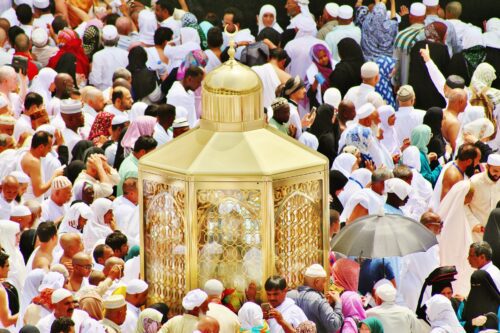 The Station of Ibrahim is commonly called “Maqam Ibrahim.” It is basically a rock placed in a crystal dome next to the Holy Kaaba, inside the premises of Masjid Al-Haram. The rock is believed to have the footprints of Prophet Ibrahim (AS) as he stood on it to construct the heightened walls of the Holy Kaaba. Allah SWT in the Holy Quran states:

“And take the Station of Ibrahim as a place of salah (prayer).” [Surah Al-Baqarah: 125]

The well of Zamzam is a holy spring that is located near the Holy Kaaba. The miraculous Zamzam well was revealed to Hajar (AS) in order to quench the thirst of Prophet Ismail (AS), who was a baby at that time. The water of this well is believed to have healing properties.

Situated inside Masjid Al-Haram in Makkah, Saudi Arabia, Safa and Marwa are the two small hills of Saae. These are said to be the hills on which the wife of Prophet Ibrahim (AS), Hajar (AS), ran while searching for water for her thirsty son, Prophet Ismail (AS). To commemorate the struggle of Hajar (AS), pilgrims perform the ritual of Sae, running between mounts Safa and Marwa seven times.

Known as the world’s largest and holiest mosque, Masjid Al-Haram is an integral part of Islamic history. Situated in Makkah, Saudi Arabia ever since Prophet Muhammad (PBUH) started spreading Islam, Masjid Al-Haram which is home to the Holy Kaaba, has been a deeply revered site. Even today, every year, Masjid Al-Haram is where Muslims from all around the world gather here to perform the congregation prayers (Salah) as well as Umrah and Hajj.