Being one of the compulsory pillars of Umrah and Hajj, the act of Sa’ee refers to the ritual of walking or running between the two hills of Safa and Marwa. The hills are located near the Holy Ka’bah inside Masjid al-Haram in Mecca, Saudi Arabia. Muslims from all over the world perform the act of Sa’ee seven times while performing Tawaf. Keep reading to learn more about what is Sa’ee.

Originally the word Sa’ee comes from the Arabic word Sa’a which linguistically means to pursue or to walk or to strive. However, according to Islamic terminology, the meaning of Sa’ee is to run or walk between Safa and Marwa while performing Hajj or Umrah. Performing Sa’ee is the fourth compulsory rite of Hajj or Umrah. Muslims are obligated to perform Sa’ee after the completion of Tawaf and its prayers. Based on Islamic history, the act of Sa’ee is a commemoration of a mother’s sacrifice for her son.

Why Do Muslims Perform Sa’ee?

As stated earlier, the Islamic ritual of Sa’ee is performed to honour the struggle of Prophet Ibrahim (AS)’s wife Hajar (AS). As she ran seven times between the hills of Safa and Marwa in search of water to feed her thirsty son Prophet Ismail (AS). On the significance of performing Sa’ee Allah (SWT) says in the Quran:

“Indeed, Safa and Marwa are among the symbols of Allah. So whoever makes Hajj to the House or performs Umrah is no blame upon him for walking between them. And whoever volunteers good – then indeed, Allah is appreciative and Knowing.” [Surah al-Baqarah, 2:158]

The Tawaf during the Hajj or Umrah is essential to focus a Muslim’s mind on the power and oneness of Allah (SWT). However, the act of Sa’ee is performed to honour the memory and struggle of Hajar (AS) –  how due to her unwavering reliance on Allah (SWT), her supplications (Dua) were miraculously answered. Moreover, the act of Sa’ee also symbolizes the ongoing challenges that Muslims encounter throughout their lives and teaches us to have Tawakkul (reliance on God) and faith in Allah SWT and His plan for us.

What Is Safa and Marwa in Islam?

Masjid al-Haram in Makkah features two historical mountains Safa and Marwa. These two small hills are connected to the larger Qaiqan and Abu Qubais mountains, respectively, near the Holy Kaaba, in Mecca, Saudi Arabia. The total distance between the hills of Safa and Marwa is 45 kilometers (1,480 ft). However, while performing the seven laps of Sa’ee, a Muslim covers the distance of approximately 1.96 miles (3.15 km). Moreover, the Sa’ee will remain incomplete if you miss covering even the slightest part of the total distance.

Why Is Running Between Safa and Marwa Important?

Pilgrims run between the hills of Safa and Marwa in commemoration of the struggle and actions of Hajar (AS), who ran and climbed seven times between the hills in search of water for her thirsty son Ismail (AS). In other words, the act of Sa’ee – running between Safa and Marwa – teaches Muslims the value of patience, hope, and having faith in Allah (SWT).

Not long after their marriage, Prophet Ibrahim (AS) and Hajar (AS) were blessed with a beautiful son, Prophet Ismail (AS), who was the to-be forefather of the blessed Prophet Muhammad (PBUH) and father of the Arabs. Soon after the birth of Prophet Ismail (AS), a revelation came to Prophet Ibrahim (AS), which ordered him to take Hajar (AS) and his son to Bakkah (present-day Makkah) and leave them with limited food and water under the shade of a tree.

Initially, Hajar (AS) was reluctant to be left alone with her infant son in the middle of the desert of Makkah. However, when she learned that it is the command of Allah (SWT), Hajar (AS) trusted Allah and agreed to do as the Almighty commanded. Prophet Ibrahim (AS), on leaving his beloved wife and only son, recited the verses stated below:

“Our Lord, I have settled some of my descendants in an uncultivated valley near Your sacred House, our Lord, that they may establish prayer. So make hearts among the people incline toward them and provide for them from the fruits that they might be grateful.” (Surah Ibrahim, 14:37)

Hajar (AS), who was nursing baby Ismail (AS), was now unable to produce milk soon after the food and water ran out. Due to the thirst, baby Ismail (AS) started having seizures. In desperation to save her only son Hajar (AS) ran seven times between the Safa and Marwa hills. She then climbed on top of Safa and Marwa to look for passing travellers and get a clearer view. On failing to find any help, she returned to check on her infant son, who was crying and scratching his heel on the barren land. That’s when Angel Jibrail (AS) was sent to their aid and with the command of Allah (SWT), a spring of water miraculously erupted from the barren land.

Hajar (AS) drank from the spring and picked up her baby Ismail (AS) to nurse. Later onwards, to contain the overflowing water Hajar (AS) dug a well to contain the spring and called it Zamzam, which means “stop flowing.” Hazrat Jibrail (AS) then assured Hajar (AS) that she should not be concerned about the health of baby Ismail (AS) and that her child along with Prophet Ibrahim (AS), will build the Holy Kaaba at the same location.

It is a Sunnah for Muslims to perform the act of Sa’ee right after the completion of Tawaf. However, if you are tired, you can rest in the pavilion and return when you have your energy back. Sa’ee starts with you offering Wudhu, followed by performing the act of Istilam on Hajr al Aswad. You are then directed to take seven rounds between the Safa and Marwa hills. After completing the seven laps, it is advisable to return to Masjid al-Haram to offer two Rakats of Nafil Shukrana.

Because the Salat of Tawaf follows the Sa’ee, it is recommended that you should be in Wudhu. After Muslim pilgrims drink the holy water from the well of Zamzam, they start moving towards the hills of Safa and Marwa to perform Sa’ee. As soon as Muslims reach on top of the Safa hill, they perform Istilaam while facing the Holy Kaaba, thanking and praising Allah (SWT). The pilgrims then step downhill and move towards Marwa.

Do I Need Wudhu?

Although Wudhu isn’t compulsory (Farz) for Sa’ee, it is considered a Sunnah to be in Wudhu before performing Sa’ee. This means that Sa’ee will be considered valid and accepted by Allah (SWT) even if one performs Sa’ee in the state of major or minor ritual impurity. This is why women suffering from post natal bleeding or menstruation can also perform Sa’ee.

Before performing Sa’ee, it is a Sunnah for Muslims to re-visit Hajr al Aswad to perform Istilam – kissing and touching the Black Stone. Following the 8 other times, one performs Istilam after, during Tawaf; this will be the ninth time Istilam is performed on Hajr al Aswad. Moreover, the act of Istilam will only be applicable if one performs Sa’ee right after Tawaf.

However, if performing Istilam has skipped your mind and find it impossible to go back to the Hajr al Aswad due to the crowds, the act of Istilam can be excluded. Nevertheless, you can also perform the sacred act while standing inside Masjid al-Haram facing Hajr al Aswad.

Safa is one of the holiest mountains in Islam. It is located in same line as Hajr al Aswad in Masjid Al-Haram. There is while signage that indicates the direction of Safa.

Duas to Recite at Safa 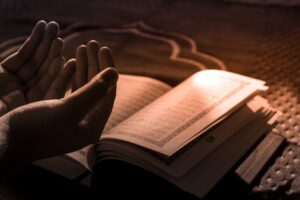 As soon as you are near the hill of Safa, it is a Sunnah to recite the following verses:

Followed by the Supplication (Dua): “I begin with that which Allah has begun with.”

However, these prayers are only to be recited once at the start of the Sa’ee and not at the beginning of each lap. After reaching the top of Safa, you must face the Holy Kaaba and recite the following dua three times before asking for whatever it is they wish for:

Make Your Way to Marwa

As you start walking towards Marwa, you’ll see green-coloured fluorescent lights set fifty meters apart. The lights indicate the total distance covered by Hajar (AS) to reach the top of the mountains. Therefore, it is a Sunnah for all men to jog at a moderate speed between these lights. However, women are directed to walk at their normal pace.

On reaching Marwa, you complete on the lap of Sa’ee. Therefore, you are instructed to raise up your hands for Dua and re-recite the verses that you earlier recited on reaching Safa. Once you recite the prayers, step down move towards Safa. Your return to Safa will be the second lap. Repeat the steps till all the 7 rounds have been completed; ideally your seventh lap should end at the top of Marwa.

After the final prayer at Marwa, it is advised that you go to Masjid al-Haram to perform two Rakats of Nawafil.

The literal meaning of Sa’ee is to run. It is a compulsory part of Hajj and Umrah, which refers to running or walking back and forth between the hills of Safa and Marwa. Sa’ee is performed in the memory of Hajar (AS) while she searched for water to feed her thirsty infant Ismail (AS).