What is Hajj? The Sacred Pillar In Islam

Also spelt Haj, Hajj is the annual pilgrimage to Makkah, Saudi Arabia, that all able Muslims are expected to perform at least once in their lifetime. It is the fifth pillar of Islam and a five-day event that around two million Muslims participate in every year. Hajj is performed in the last month of the Islamic (lunar) calendar. Read on to learn more about what is Hajj and its significance in Islam.

Why Is Hajj So Important in Islam? 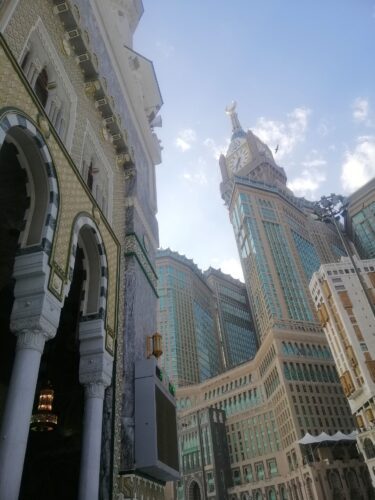 Hajj is the sacred pilgrimage that is performed by Muslims at the holy mosque Masjid Al-Haram in Makkah, Saudi Arabia. Allah SWT in the Holy Quran commands the Muslim Ummah to perform Hajj once in their lifetime.

Allah SWT says: “You will enter the Sacred Masjid, God willing, perfectly secure, and you will cut your hair or shorten it (as you fulfil the pilgrimage rituals) there. You will not have any fear. Since He knew what you did not know, He has coupled this with an immediate victory.” [Holy Quran, 48:27]

“And proclaim to mankind the Hajj pilgrimage. They will come to you on foot and on every lean camel; they will come from every deep and distant (wide) mountain highway (to perform Hajj).” [Holy Quran: 22/27]

Hajj holds great significance in Islam. Being a spiritual, physical, and emotional challenge, it blesses Muslims with the opportunity to refresh their spiritual self. To renew their faith and to be cleansed of all the worldly sins.

While talking about the importance of Hajj, Prophet Muhammad PBUH said, “Whoever performs Hajj for the sake of Allah and does not utter any obscene speech or do any evil deed, will go back (free of sin) as his mother bore him.” [Sahih Bukhari; Muslim]

Hajj takes place during the first ten days of Dhul Hijjah, the 12th and the last month of the Islamic calendar. In 2022, Hajj is expected to be held from the evening of Thursday, 07 July 2022, till the evening of Tuesday, 12 July 2022. However, these dates are tentative as they depend on the sighting of the moon.

What Happens During Hajj?

Hajj takes place during the 12th Islamic month, between the 8th to 12th Dhul Hijjah. After putting on the Ihram and crossing the lines of Miqqat, on the first day of Hajj, pilgrims perform Umrah in Makkah, Saudi Arabia. After performing Tawaf – circling around the Holy Kaaba – Muslims perform Sa’ee by retracing the Hajra (AS) steps that are running between the hills of Safa and Marwa. After this, the pilgrims move toward Mina and spend the night worshipping.

The next day, the pilgrims head towards Mount Arafat, where they spend the afternoon. During their stay, the pilgrims climb the hill of Jabal al-Rahma – the place where Prophet Muhammad PBUH delivered the last sermon. As the sun sets, the pilgrims start walking towards Muzdalifah. On the third day of Hajj, the pilgrims perform the final Tawaf, followed by Rami of the Jamarat and sacrifice of the animals in the name of Allah SWT.

How Long Is Hajj?

The Hajj pilgrimage usually lasts for around five to six days, depending on the pilgrim’s plan. On the 12th Dhul Hijjah (fifth day), most pilgrims leave Makkah after completing Tawaf al-Wadaa, meaning to bid farewell. Muslims walk around the Holy Kaaba seven times during the final Tawaf in the counter-clockwise direction.

While performing the Tawaf al-Wadaa most Muslims try to kiss or touch the Holy Kaaba as they circle before leaving.

Pilgrims who stay for the sixth day (13th Dhul Hijjah) perform Rami- the stoning of the Jamarats. Note that, the ritual of Rami is also performed during the fourth and fifth days of Dhul Hijjah.

Why Do Muslims Go On Hajj? 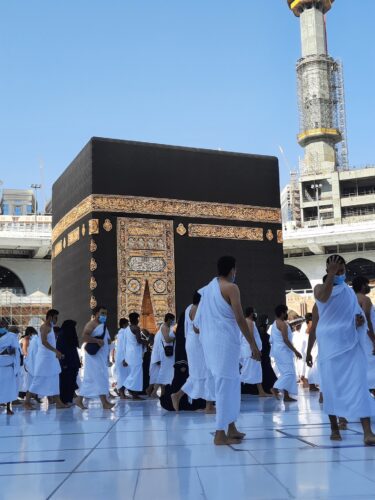 Hajj pilgrimage is a religious obligation that should be completed at least once in a Muslim’s life. It is believed that the journey of Hajj allows Muslims to wipe away their sins and get a clean slate in front of Allah SWT. While taking part in Hajj, pilgrims retrace the route followed by the beloved Prophet Muhammad PBUH and Prophet Ibrahim (AS) and Prophet Ismail (AS) before him.

The ritual of Hajj also involves retracing the steps of Prophet Ibrahim’s (AS) wife Hajra (AS), who ran seven times between the mountains of Safa and Marwa to seek water for her son. Moreover, the act of Hajj rewards Muslims by giving them peace purity and deepening their devotion in the name of Allah SWT.

Who Goes On Hajj?

Hajj is an Arabic word that means “to intend a journey.” Although there is no obligation on children to perform pilgrimage, based on the Islamic teachings, it is important for every financially and physically capable Muslim to perform Hajj at least once in their lifetime. However, children may participate in Hajj along with their parents or guardian. The ones who complete the pilgrimage can add the title of Hajji to their names.

How Many People Go On Hajj Each Year?

Every year around two to three million pilgrims from all across the world gather in Makkah, Saudi Arabia, to perform Hajj. It is considered one of the largest gatherings in the world.

Have a look at some lesser-known facts about Hajj:

According to the Saudi Government, a staggering 2.5 million Muslims attended Hajj in 2019, and the numbers have only grown with the passing years. Out of the 2.5 million pilgrims, only 634,000 were Saudi residents, while the remaining 1.9 million were international pilgrims; Muslims from Egypt, Pakistan, India, Yemen, Bangladesh, and Sudan.

Fact 2: Hajj Is the 5th Pillar of Islam

Hajj is the fifth pillar of Islam. In the Holy Quran, Allah SWT instructs all financially and physically able Muslims to perform Hajj at least once in their lifetime. The Holy Quran has an entire chapter (Surah) named after Hajj. In the Surah, Allah SWT tells us:

“We designated for Abraham the site of the House, [saying], ‘Do not associate anything with Me and purify My House for those who perform Tawaf and those who stand [in prayer] and those who bow and prostrate.’

That they may witness benefits for themselves and mention the name of Allah on known days over what He has provided for them of [sacrificial] animals… Then let them… fulfil their vows and perform Tawaf around the ancient House.’

That [has been commanded], and whoever honours the sacred ordinances of Allah – it is best for him in the sight of his Lord…” [Holy Quran, 22:26-30]

Fact 3: The Ritual of Hajj Is Performed Between the 8th and 12th Dhul Hijjah

Every year Hajj is performed during the Islamic month of Dhul Hijjah, otherwise known as the Month of the Pilgrimage. According to the Islamic calendar, Hajj takes place during the same period of the lunar calendar that is 8th, 9th, 10th, 11th, and 12th Dhul Hijjah. Eid Al-Adha is also celebrated as a part of Hajj.

Based on Islamic history, most Muslims believe that the first pilgrimage after the migration of Prophet Muhammad PBUH from Makkah to Madinah was held in 7 AH on 4th Dhul Hijjah. However, little do people know that the origin of Hajj actually dates further back to 2000 BCE. Hajj’s ritual is even older than the event of Zam Zam, the running of Hajra (AS) between the Safa and Marwa.

He then retraced the journey of Hajra (AS) by running between the Safa and Marwa, followed by the stoning of the devil and delivering the last sermon on Mount Arafat. Since then, Hajj has been performed in the exact same way!

According to the guidance of Prophet Muhammad PBUH, in order to perform Hajj, men and women should wear an all-white dress, known as the Ihram. For men, the ihram is basically two plain white sheets wrapped around their bodies, whereas for women, Ihram is any simple dress that covers them from head to toe, only leaving the face out.

This unique dress code of Hajj represents equality and the state of purity. Muslims are not allowed to wear jewellery or perfume with their Ihram.

Summary – What Is Hajj

Hajj is the fifth and final pillar of Islam. Muslims from all over the world are expected to perform Hajj at least once in their lives. According to the Islamic calendar, Hajj takes place between 8th and 12th Dhul Hijjah. It is a five- to six-day-long religious tradition. Every year, more than three million Muslims visit the Holy Kaaba in Makkah, Saudi Arabia, to perform Hajj.