Being one of the fundamental pillars of Islam, Hajj can be defined as an annual spiritual experience undertaken by Muslims at least once in their lifetime to express their servitude and faith towards Allah (SWT). Following the 1,377-year-old Sunnah of Prophet Muhammad (PBUH), millions of Muslims visit the Holy Kaaba every year in the Islamic month of Dhul-Hijjah to offer Hajj. However, in order to be eligible to perform Hajj, a Muslim must be physically, mentally, and financially stable. The condition to be financially and physically competent to perform Hajj is called “istita’ah,” where the Muslim who successfully fulfills the journey is called “Hajji” or “mustati.” 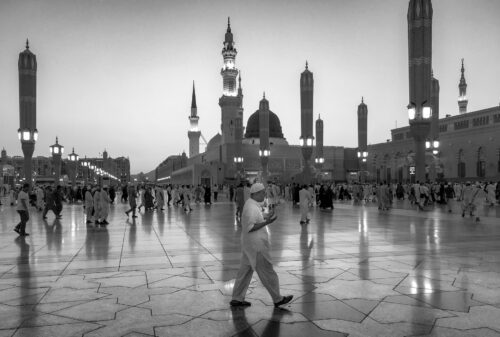 Allah (SWT) on the significance of Hajj says in the Holy Quran, “We have completed the shrine (Holy Kaaba), a focal point for the people and a secure sanctum. You can use Abraham’s shrine as a prayer house; we give power to Abraham and Ismail. You shall clean my house for those who make a visit and those who live there and those who nod and prostrate.” (2:125)

The rituals of Hajj are performed in a five or six day’s duration, officially beginning on the 8th Dhul-Hijjah to ending on the 13th of the same month; Hajj is the largest annual religious event that takes place in Islam. Literally meaning “to take part in the journey,” The 7 steps of Hajj are as follows:

Making a pure intention and wearing the Ihram are the two of the first essential steps when going for Hajj. After making the niyat, Muslim pilgrims are advised to wear the Ihram- two pieces of unstitched white sheets for men and a loose-fitting Abaya for women, properly covering the whole body. It is recommended that the pilgrim should wear the Ihram on Dhul-Hijjah before entering Miqat – the outer boundaries of Makkah. The five entry points or relevant Miqats for pilgrims are as follows:

Also, once in Ihram, pilgrims are advised to recite Talbiyah while abstaining from all sinful acts. The Talibyah should be recited in a loud voice:

After arriving at Makkah, Muslims intending to perform Hajj al-Tamatt’u should combine the rituals of Umrah with Hajj. For this, Muslims walk around the Holy Kaaba 7 times in an anti-clockwise direction, also known as Tawaf. They then perform the ritual of Hajr-e-Aswad (Black Stone) and move towards the next stage of Umrah, running between the Safa and Marwa hills. Once the Umrah is complete, pilgrims start their journey towards Mina.

Situated 5 to 6 km from Makkah, Mina is a small town. Arriving at the tent city of Mina, pilgrims are advised to rest there until the following day. Starting with the noon prayer (Zuhr) and ending with the dawn prayer (Fajr), pilgrims recite all five Salahs while staying in Mina. Today, the land of Mina comprises modern tents that are equipped with all essential amenities. Muslims should recite both compulsory and non-compulsory prayers while staying at Mina.

On the morning of the second day of Hajj that is 9th Dhul-Hijjah, the pilgrims start walking towards Arafat while reciting Talbiyah at the top of their voices. Muslim pilgrims observe Zuhrain – a combination of Zuhr and Asr prayer with Qasar prayer upon reaching the mount of Arafat. This is known as Waquf – the act of standing before Allah (SWT) and is observed near the Jabal al-Rahmah from noon to sunset.

Located 14.4 km from Mina, Mount Mercy or Jabal al Rahmah of the Arafat was where the beloved Prophet Muhammad (SAW) delivered the final sermon.

The pilgrims’ next destination for Hajj is Muzdalifah, a small town located between Mina and Mount Arafat. Upon arriving at sunset on the grounds of Muzdalifah, the pilgrims offer Maghribaen – a combined prayer of Maghrib and Isha. Muslims spend one whole night under the open sky and collect 49 pebbles of similar sizes for the ritual of Rami (stoning of the Devil). They then leave the town of Muzdalifah on the morning of 10th Dhul-Hijjah.

The pilgrims now head back to Makkah to perform Tawaf al-ifadah and Sa’I, the act of running between the Safa and Marwa hills. Once done, Muslims then go back to Mina to perform the acts of Rami, Nahr, and Halq.

On arriving at Mina, pilgrims perform the act of Rami by stoning the Jamraat al-Aqabah. Seven stones are thrown at the column structure. The stoning of Jamrat is performed in the memory of the act of Prophet Ibrahim (AS) when the devil tried discouraging him from following Allah (SWT) command. In reply, Prophet Ibrahim (AS) threw small pebbles to make the devil go away. Rami should be carried out at noon each day. Rami is performed on the 11th and 12th of Dhul-Hijjah.

After the completion of Rami, on 12th Dhul-Hijjah, Muslim pilgrims are advised to perform the sacrifice of an animal; it can be a camel or lamb. For this, pilgrims can either purchase sacrifice coupons or vouchers, stating that the sacrifice has been made on their behalf. The meat of the sacrificed animal should be distributed to the needy.

Halq means shaving the head, while Taqsir means shortening or clipping of hair. After performing the sacred sacrifice, men pilgrims are advised to get their heads completely shaved or clipped. While forbidden to shave their heads, women are advised to get a strand or lock of their hairs chopped. The act of Halq and Taqsir symbolizes a Muslim’s complete devotion to Allah (SWT) and detachment from worldly appearances.

After completing the ritual, pilgrims return to the Holy Kaaba in Makkah to perform the “Tawaf al-Ifadah,” also known as the “Farewell Tawaf,” followed by Sa’I. Though this officially marks the end of Hajj, many pilgrims also visit Madinah before heading home.

Why Do Muslims Go Around the Kaaba 7 Times?

There’s no specific explanation as to why Muslims go around the Kaaba seven times. Just like Muslims are advised to worship five times a day, they are told to take seven rounds around the Holy Kaaba while performing Umrah or Hajj. However, the act of Tawaf is a reflection of the idea that a Muslim’s life should only revolve around obeying the commands of Allah (SWT) and following the Sunnah of Prophet Muhammad (PBUH).

Hajj is one of the five essential pillars of Islam. Being compulsory on every Muslim, it is advised that Hajj be offered at least once by financially and physically able Muslims.