Importance of Ihram during Hajj

As millions of Muslims embark upon a pilgrimage to the Holy Kabah in Makkah, they must enter a particular state of purification and sanctity, known as the Ihram. In Arabic, Ihram means prohibition and a state of holiness. It demands the pilgrim to remove any impurity or unclean aspect from their mind, body, and soul.

What Does It Mean to Be in A State of Ihram?

Ihram is a sacred state into which a Muslim pilgrim must enter to perform Hajj (major pilgrimage) or Umrah (minor pilgrimage). The term is also often used to refer to the state a worshipper must be in to perform salat five times a day.

It involves the cleansing and purification of the body and spirit, including ceremonial rituals such as shaving the head, cutting nails, and trimming beards. Men wear a white, seamless, two-piece garment, while women wear long robes. In a state of Ihram, Muslims must abstain from the following acts:

What Is Ihram During Hajj?

Muslims stop at a designated station to perform the rituals associated with wearing Ihram. It is an obligatory pre-requisite to Hajj, which is performed in a holy state of mind and body. The importance of Ihram during Hajj is to create peace, equality, humility, and remind believers of the Day of Judgement.

Before beginning Hajj or Umrah, pilgrims must complete their Ihram by reciting the Talbiyah, which states your intention to perform the pilgrimage. The significance of recitation of Talbiyah lies in the hadith narrated by Ibn Umar, as even the Prophet (PBUH) used to recite it before any pilgrimage:

“The Prophet (pbuh) recited Talbiya when he had mounted his Mount and was ready to set out.”

Why Is Ihram So Important During Hajj?

The Ihram signifies peace, harmony, and unity. Millions of Muslims come to perform Hajj wearing the same clothes, with no one superior to the other. This creates humility and harmony between the believers who are at the Kabah with the sole purpose of worshipping Allah. All pilgrims are equal in the eyes of Allah, irrespective of whether they are Arab or non-Arab. The identical dressing signifies fairness between races, castes, or the rich or poor.

The significance of Ihram also lies in the white sheet worn by the pilgrims, which is similar to the shroud used to wrap dead bodies before they are buried. So, with everyone dressed in the white sheets of the Ihram, they are reminded of how death comes unannounced and does not discriminate between anyone. It also serves as a reminder that Muslims must be righteous and stay away from the wrong path. This inspires believers to improve themselves and abstain from sins and evil deeds.

The Ihram aims to remind Muslims of their virtues and help them improve and increase their Emaan. As narrated by Abu Huraira,the Prophet (PBUH) said:

“Whoever performs Hajj for Allah’s pleasure and does not have sexual relations with his wife, and does not do evil or sins then he will return (after Hajj free from all sins) as if he were born anew.”

What Is Ihram Clothing?

Ihram is a spiritual state as well as a physical state. Pilgrims must adhere to specific clothing rules. A clean, white sheet, free of perfume or any scent must be worn during the pilgrimage. The clothing differs for both men and women, which is further discussed in the next section.

A man asked, “O Allah’s Apostle! What kind of clothes should a Muhrim wear?” Allah’s Apostle replied, “He should not wear a shirt, a turban, trousers, a headcloak or leather socks except if he can find no slippers, he then may wear leather socks after cutting off what might cover the ankles. And he should not wear clothes which are scented with saffron or Wars (kinds of Perfumes).”

How to Wear an Ihram? 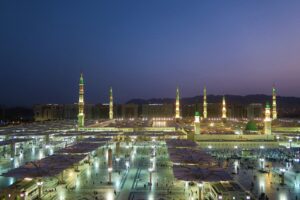 The Ihram begins by performing ghusl (a ritualistic shower) and wuzu (ablution) to purify the body. This is followed by making the intention or niyyat of entering the state of Ihram by reciting the Talbiyah: “lab-bay-ka Allahumma lab-bay-ka; lab-bay-ka la sharikalaka lab-bay-ka”

In cases where water is unavailable, it is allowed for Muslims to simply perform ablution and continue with the rest of their pilgrimage rituals. After the niyyat has been made, it is advised to pray two rakats of Salah to complete the process of wearing an Ihram.

It is necessary for every pilgrim to wear the Ihram before they pass the Miqat. This is supported by the hadith narrated by Al-Bukhari:

“Prophet Mohammed (PBUH) said: ‘one shouldn’t pass the Miqat unless he/she is in the state of Ihram.’”

The cloth used in Ihram must be white coloured for men, and should be plain and unadorned. The cloth must be wrapped loosely around the body and should cover most of the body for women. It is crucial to ensure that the clothes are neat and tidy.

In the case of women, a cloth or scarf must be used to cover the hair. No perfume or scent can be used on the cloths or body when wearing an Ihram. Ittar may be used instead. It is permitted for women to wear regular clothes that cover their entire body except the face and hands. Women are not permitted to cover their face or wear gloves.

Men are required to dress in white-coloured two-piece attire that is unadorned and plain. Men are prohibited from covering their head with any fitting object such as turbans.

It is prohibited for men to cover their head with any attached fitting object. The Prophet (PBUH) has said that men should not wear a shirt, trouser, a hooded cloak, leather socks, or turbans while wearing the Ihram.

Do Men and Women’s Ihram Differ?

Men and women have a slightly different Ihram in terms of clothing, which is why it is important to understand what is Ihram for ladies and men individually. The prohibitions remain the same for both the genders, as does the process of wearing the Ihram.

For men, two pieces of cloth must be used. The first piece has to be wrapped in the midriff section of the body to cover the lower half. The second piece is wrapped around the upper body, over the shoulder.

For women, there is no specific clothing mentioned in terms of Ihram. The only requirements are that loose clothing be used to cover the entire body, leaving the face and palms exposed. A scarf or cloth has to be used to cover the head, hiding the hair. Many women prefer using long robes with a scarf. Neither men nor women are permitted to use scented clothes or apply perfume on their body or clothes.

Check Out Some of Our Hajj and Ihram Related Content

Preparation is crucial for Hajj. You need to be mentally, physically, and spiritually prepared for the journey by learning as much as you can about the rituals involved in Hajj. Many people have questions about what they should carry for their Umrah, which you can read more about here.

It also helps to be aware of what a pilgrim needs to abstain from and how they can make sure their act of worship is accepted by Allah. You can click here to learn more about common mistakes people make during Hajj and Umrah.