Common Mistakes people do in Umrah and Hajj

Below we complied a list of some of the extremely common mistakes that scores of people make, year after year, so that we can be weary of them and protect and prevent ourselves from making them. This way Insha Allah our Hajj will be closer to the Sunnah and more acceptable to Allah ﷻ.

Mistake 1: Thinking that Du’a is accepted at first glance of the Ka’bah

Many people have the wrong notion that the first time they look at the Ka’bah, any Du’a that they make will be answered. Not true! This has no evidence from the Shariah. And any Hadith that one may find regarding this matter is either extremely weak or fabricated. When asked about Du’a being accepted at the first sight of the Ka’bah, Sheikh Sa’d Al-Humayd replied:

“This is not true; there has to be evidence for this to be true, because acts of worship should only be based on evidence. And that evidence must be Sahih in and of itself and it should be clear and unambiguous. And Allah ﷻ knows best.” 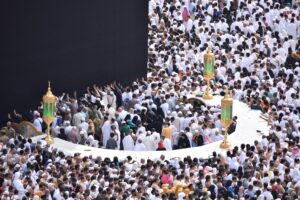 Mistake 2: ‘Kissing’ the Black Stone from far away and stopping during Tawaf to do so

Kissing the Black Stone is a beautiful Sunnah and an honour indeed for the one who is able to do so. However, due to the immense crowd, majority of the people cannot reach it. So many people try to “kiss” it from far away. When they are in line with the Black Stone, they stop in their tracks during Tawaf, face the Black Stone, put up both hands on the side of their head and ‘kiss’ the Black Stone in air, as if the Black Stone were right in front of them. Or they throw ‘flying kisses’ at the Black Stone. Besides being a wrong practice, stopping the flow of Tawaf causes disruption and unnecessary crowding in that area, thereby creating a lot of inconvenience to fellow pilgrims.

‘Distance kissing’ is not from the Sunnah of course. All the Prophet (Peace and blessing of Allah be upon him) did while doing Tawaf was kiss the Black Stone if he easily could do so, or touch it with his hand and kiss his hand. But, when it was crowded, he only pointed to it from far away and said, “Allāhu Akbar.” That’s it.

It was narrated that Abu Tufayl (may Allah be pleased with him) said, “I saw the Messenger of Allah (Peace and blessing of Allah be upon him) perform Tawaf around the House, touching the corner (where the Black Stone is) with a crooked staff which he had with him, then kissing the staff.” [Sahih Muslim]

Ibn Abbas said, “The Messenger of Allah (Peace and blessing of Allah be upon him) performed Tawaf on his camel, and every time he came to the corner (where the Black Stone is) he would point to it and say Allāhu Akbar.” [Al-Bukhari, no. 4987]

That’s all we need to do. If we are far away from the Black Stone, we should point to it with our right hand, say Allāhu Akbar and move on. No facing the Ka’bah, no ‘distance kissing’, no stopping dead in your tracks. Keep moving and don’t disrupt the flow of the Tawaf.

Sheikh Bin Baz said, “It should be noted that the Tawaf remains perfectly valid without kissing the Black Stone. If one does not or cannot kiss the Black Stone. it is sufficient simply to point to it, saying ‘Allāhu Akbar’ when one comes parallel to it, although one may be at a distance from it.” [Fatawa Bin Baz]

Mistake 3: Shouting out Du’a in unison

Some people shout at the top of their voices, in unison, while making Du’a during Tawaf. They follow an Imam or a leader who says out different Du’as aloud, and then the followers all repeat after him in unison. This causes a lot of confusion and disturbs others engaged in their own Du’as, making them lose focus and Khushoo’. And obviously, it is also not befitting that one should shout and raise his voice in a place as sacred as the Haram.

The right thing to do is to know, before you go for Tawaf, the Du’as that you want to make, the Qur’an you want to recite, etc. This way you won’t have to follow anybody and you will be making your own Du’a, in your own language, from your own heart. It will give you better concentration and satisfaction. Plan your Du’as ahead of time; repeat them to yourself, with humility and Khushoo’. After all, you’re making Du’a to the One Who hears all and sees all. The Prophet (Peace and blessing of Allah be upon him) said, “Each one of you is conversing with his Lord, so do not disturb one another or raise your voices over one another when reading (or he said) when praying.” [Abu Dawood, Sahih by Al-Albani]

Some people designate specific Du’as for each round and there are even books that have specific Du’as written for every round. This is not something from the Shariah. The Prophet (Peace and blessing of Allah be upon him) did not recite any specific Du’a in any of the rounds, and neither did his companions. If there was such a thing, then he would have told us about it, and he would have done so himself first.

The only Du’a that he did specify during Tawaf was when he reached at the end of each circuit between the Yemeni Corner and the Black Stone. He would say,

“Our Lord, give us good in this world and good in the Hereafter and save us from the punishment of the Fire.”

Many people make this mistake. They circumambulate the Ka’bah seven times and then they donate the reward of this Tawaf to their loved ones, their family members or their relatives who have passed away. Also, when people go for Hajj or Umrah, their relatives and friends specifically ask them to “do one Tawaf on their behalf”. This is not valid and there is no evidence for its permissibility.

Only Hajj and Umrah can be done on others’ behalf, but Tawaf individually cannot be done for someone else.

Sheikh Bin Baz said, “Tawaf around the Ka’bah cannot be done by proxy, so no one can do Tawaf on behalf of someone else, unless he is doing Hajj or Umrah on his behalf, in which case he may do it on his behalf along with the rest of Hajj or Umrah.” [Fatawa Bin Baz] 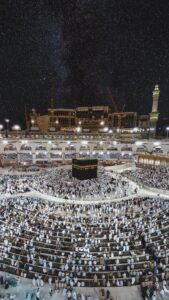 Some people perform multiple Umrah’s after finishing their own, going outside Makkah either to Masjid Ayesha (Tan’eem) or other Meeqat points to put on a new Ihram and perform more Umrah’s again and again. Some people do one Umrah every day, some even more! This is not from the Sunnah and not from the practice of the Sahabah.

Actually, instead of making multiple Umrah’s, it would be better to perform as many Tawaf as you can for yourself. Tawaf is an act of worship that cannot be done anywhere else except Makkah and this is a golden opportunity.

Ibn Taymiyah said, “The Salaf agree that performing voluntary Tawaf is superior to going to Al-Tan`eem or to the boundaries of the sacred precincts and making Umrah.” [Majmu Al-Fatawa]

Mistake 7: Thinking that the Jamarat are devils

When some people go to stone the Jamarat, they think they are going to stone the devils. In fact, they think they are stoning Iblees himself! They even call this ritual, “Stoning the Shaitan.” That is not true. The Jamarat are not devils. All we do when we stone these Jamarat is an act of remembering Allah, following the Messenger of Allah ﷺ as an act of worship. That’s it. No need to get emotional, no need to cuss at the Jamarat, no need to push and shove.

Mistake 8: Touching or wiping over the Ka’bah

Some people touch the Ka’bah or Maqam Ibrahim thinking there is blessing in it. They also touch and wipe their hands on the pillars of the Grand Mosque or the Prophet’s Mosque and then they wipe the hands over themselves believing this is something good. This is another act with no basis in the Shariah of Islam. The Prophet ﷺ did not do any of this. If it was good, he would have done so. But he didn’t, so we won’t either.

Note: The Ka’bah walls and Maqam Ibrahim enclosure is perfumed and it’s forbidden to apply/touch perfume, scents when you are in Ihram

Blessings come from following what Allah and His Messenger ﷺ have prescribed, and not from introducing innovations.

Mistake 9: Thinking that praying 40 prayers in Madina is compulsory

Sheikh Bin Baz said, “The widespread idea that the visitor should stay for eight days so that he can offer 40 prayers in the mosque is wrong. Although it says in some Ahadith that “whoever offers 40 prayers therein Allah will decree that he is safe from the Fire and free from hypocrisy,” it must be known that this Hadith is Da’eef (weak) according to the scholars and cannot be taken as proof or relied upon. There is no set limit for visiting the Prophet’s Mosque. If a person visits for an hour or two, or a day or two, or for more than that, there is nothing wrong with that.” [Fatawa Bin Baz]