Performing Hajj or Umrah is among the biggest desires for Muslims. If you keep COVID-19 out of the picture, the Hajj event used to be the world’s largest human gathering, with people arriving from all over the world. In 2019 alone, almost 2.5 million pilgrims assembled in the city for Hajj.

If you’ve performed Umrah or Hajj in the past, you must be aware of the fact that neither Hajj nor Umrah can be performed without wearing Ihram. Thus, all Muslim men and women must follow certain rules of Ihram as they head to Makkah to perform Umrah or Hajj. In this guide, we’ll take a deep look into rules of ihram. Let’s begin with answering what is Ihram?

What is the state of ihram? 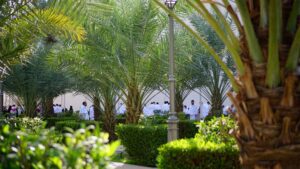 Many people ask ‘What is Ihram?’ A more appropriate question should be ‘What is the state of Ihram?’ This is because Ihram is a divine state that Muslim men and women enter to perform the rituals of Umrah or Hajj. Chosen as a ceremonial clothing for Hajj, Ihram must be worn by every individual heading to Makkah for either of the lesser or greater pilgrimage. A pilgrim enters the state by performing some cleansing acts and wearing a dress.

Wearing Ihram helps establish complete equality among the pilgrims. On one hand, the act eliminates the differences related to wealth and societal status and on the other hand, it renounces the temptations of self-admiration among the pilgrims. Because of the simplicity and uniformity of Ihram, one cannot tell who is rich and who is poor.

Plus, when pilgrims lose the temptations of vanity, they become more concerned about achieving a sound heart, which is more important in the eyes of Allah than beautifying oneself.

In terms of clothing, the state of Ihram is different for men and women. For men, Ihram clothing includes two unsewn sheets of white cloth without buttons, seams, or hems. One of these clothes, called Rida, covers the upper half of the body including the shoulders (one shoulder is left exposed when performing tawaf). The other half of the cloth, known as Izar, is worn on the waist and covers the area between the navel and the feet.

Keep in mind that the prohibition of unsewn clothes covers everything on the body. This means you can’t even wear any undergarments, socks, or a cap, no matter how habitual you are to wear those items. In fact, you must use footwear that will leave your ankles and toes exposed.

Women’s Ihram is a loose robe that covers their entire body. This can be their ordinary clothing, given that it ensures complete coverage of their body. This means their Ihram can include seams or buttons but the colour of the clothes shall only be either white or black. They aren’t permitted to cover their face with burqa or niqab, nor are they allowed to keep their hands hidden. Their footwear should cover their entire feet.

While this is what Ihram clothing looks like, you won’t enter the state of Ihram by merely wearing these clothes. You also need to make the intention of Ihram.

If you wish to take your child to Umrah, they must be dressed in Ihram clothing too. If the child is too young, you will need to make the intention on their behalf. As a guardian, you must implement all the restrictions on Ihram on your child.

When you enter the state of Ihram, certain extra restrictions are imposed on pilgrims that would otherwise be considered permissible. With this in mind, many people confuse themselves and end up considering several permitted acts as prohibited. Here are some of the things you can safely do while in the state of Ihram:

Do I have to be in the state of ihram while flying?

Taking a bath, shaving, wearing Ihram, and making other preparations are not possible while flying. So, it’s advised that you do all this before boarding your plane and leave only the intention part for the plane. When it’s time to make the intention, that is, when you reach Meeqat, the plane crew will inform you. That’s when you’ll make the intention and enter the state of Ihram.

What is forbidden once you’ve in the state of ihram?

When you enter the state of Ihram, the following acts become prohibited:

When are restrictions lifted?

The restrictions of Ihram of Hajj are lifted when after the stoning of Jamrat al-Aqabah and shaved head.

By now, you should have not only understood what is Ihram but also have grasped the rules of Ihram. We hope that this guide helps you abide by the do’s and don’ts of Ihram. In the case you have complicated queries, get in touch with an authentic Islamic scholar before proceeding to the spiritual journey. We wish you good travels and hope that you don’t need to face penalties for committing any mistakes while performing Hajj or Umrah.