Muzdalifah – 9th Night of Dhul Hijjah – Everything You Need To Know

Also known as Al-Mashar Al-Haram or Al-Mashar, Muzdalifah is a region located between Mount Arafat and Mina, near Makkah in the Hejazi region of Saudi Arabia. According to Islamic history, pilgrims are instructed to spend the night of 9th Dhul Hijjah at Muzdalifah under the open sky. It is also the place from where pilgrims gather pebbles to hurl at the pillars of Jamarat. Read on to learn more about Muzdalifah. 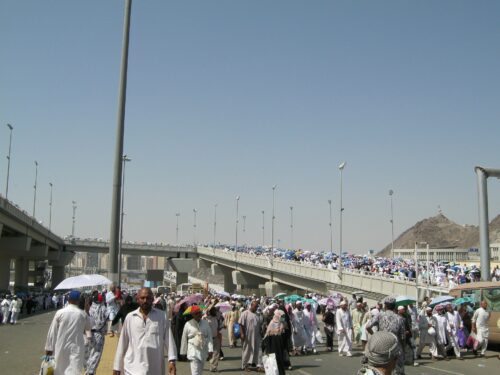 Muzdalifah is four kilometres long and covers an area of 12.25 square kilometres. It stretches from the mountains of Ma’zamayn to the Valley of Muhassar. Muzdalifah is an open area located near Makkah, Saudi Arabia, in the Hejazi region. Muzdalifah lies at the southeast of Mina and is situated on the route between Mount Arafat and Mina. Pilgrims spend the second day of Hajj, the night of 9th Dhul Hijjah, at Muzdalifah, under the open sky.

Unlike Mina, there are no tents or any other accommodation facilities at Muzdalifah. Even though there are plenty of lights, as the night progresses, it can get difficult to distinguish between people. The boundaries of Muzdalifah are indicated by large purple signposts. There is also a masjid named Mashar Al-Haram, meaning ‘the sacred monument.’ It is located at the site of what used to be a small mountain.

When staying at Muzdalifah, there are two things that you can do:

What Does Muzdalifah Mean?

The term Muzdalifah is derived from the Z-L-R Quranic root, which means “nearness” or “closeness.” It is believed that the valley was given the name of Muzdalifah because of its closeness to Mount Arafat. The root of its name is “Al-Mash’ar,” as this is the place where a pilgrim must reach to gather awareness.

Another name for Muzdalifah is “Al-Jam,” as it is the place where people gather. According to Al-Ibtah, Muzdalifah was the place where Prophet Adam (AS) the Maghrib and Isha prayers together. Muzdalifah is also called Al-Ibtah, meaning flat area. According to Imam al-Sadiq (AS), “This land is called al-Ibtah because Prophet Adam (AS) was missioned to stay at Muzdalifah until sunrise. Then, he (AS) was missioned to climb Mount al-Mash’ar and to confess to his sin when the sun shined upon him, and he (AS) did so, and this confession was made as a tradition among his children.”

The History of Muzdalifah

According to the first narration, it is believed that Prophet Muhammad PBUH, after the call to prayer (Adhan) and the Iqama (the second call to prayer), performed the Maghrib Salaah. After this, the Iqama was performed a second time, and the Isha prayer was observed in Qasr mode, meaning it was limited to only two Rakats. Moreover, no voluntary prayers were performed between these two salahs (Maghrib and Isha). Abdullah ibn Umar (RA) narrates:

“The Prophet Muhammad PBUH offered the Maghrib and Isha prayers together at Jam (i.e. al-Muzdalifa) with a separate Iqama for each of them and did not offer any optional prayer in between them or after each of them.” [Narrated in Sahih al-Bukhari]

However, according to another narration, there was only one Iqama:

Prophet Muhammad PBUH then rested till dawn, and soon after the moon had set, went to the weaker members of his family, i.e. the infirm, elderly, women, and children and instructed them to return to Mina that night instead of waiting until dawn the next day. One of those members was Prophet Muhammad’s PBUH wife, Sawada bint Zama (RA). Hazrat Aisha (RA) narrates:

Though the pebbles for pelting the Jamarat might be collected from anywhere, they are best collected from Muzdalifah. According to the Sunnah, a pilgrim must collect 49 pebbles to perform the ritual of Rami or the Stoning of Jamarat. The breakdown for collecting stones is as follows:

Moreover, picking an additional 21 pebbles is recommended as an additional, precautionary measure, as you might miss hitting the target, or some might fall. Although a pilgrim can collect the stones during any time throughout their stay at Muzdalifah, it is sunnah to collect them in the morning. Here are some tips regarding the collection of the stones:

Praying Maghrib and Isha Prayer Together 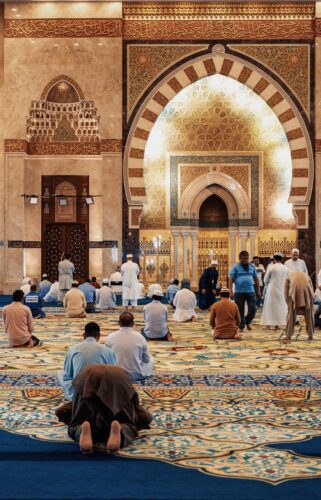 During Hajjatul Widda, Prophet Muhammad PBUH performed the Maghrib and Isha Salaahs (prayers) together in the form of Qasr. He stayed at the very spot where Masjid Mash’arul Haram is currently located. Standing there, Prophet Muhammad PBUH said, “Although I am staying here, you may stay anywhere throughout Muzdalifah.” [Muslim]

Why Is Muzdalifah Important in Islam?

Muzdalifah beholds great significance in the history of Islam, as the stay can change a person’s heart and life for good. It is the place where pilgrims spend the night before pelting Satan. Every pilgrim’s heart is filled with new resolutions as they make Dua while picking up the stones. Therefore, when collecting the stones, it is recommended to remember a blameworthy characteristic or sin with each pebble that you pick and know that when throwing the stones at the Jamarat, you are throwing your own bad habits with it.

Every year, around 2.5 million Hajj pilgrims worldwide spend the night in Muzdalifah after gathering at Mount Arafat. These pilgrims stay the night under the open sky, representing equality and seeking repentance from Allah SWT.

Muzdalifah Mentioned in the Quran

Originally the name Muzdalifah is derived from the Arabic word “Izdalfa,” which literarily means “to come near” or “to approach.” Muzdalifah is also known as Al-Mashar Al-Haram, which is mentioned in Surah Al-Baqarah in the Holy Quran:

“But when you depart from Arafat, remember Allah at al-Mashar al-Haram. And remember Him, as He has guided you, for indeed, you were before that among those astray.” [Surah al-Baqarah 2:198]

Located at the southeast of Mina, on the way between Mount Arafat and Mina, Muzdalifah is an open valley. Following Islamic history and tradition, on the second day of Hajj, i.e. 9th Dhul Hijjah, pilgrims travel (walk) towards Muzdalifah from Mount Arafat. Upon reaching here at sunset, they pray the combined salah of Maghrib and Isha and spend the night under a sky full of stars.