Also known as Jabal ar-Rahmah, Mount Arafat is located in the southeast of Makkah, Saudi Arabia. On the 9th of Dhul Hajj, Muslim pilgrims leave Mina for Mount Arafat, where they stand and perform a contemplative vigil and recite the Holy Quran. Mount Arafat is where the beloved Prophet Muhammad PBUH delivered the last sermon to the Muslims who accompanied him for Hajj towards the end of his life. Read on to learn more about Mount Arafat and its significance in Islam.

What Is Mount Arafat, Otherwise Known as Jabal Arafat? 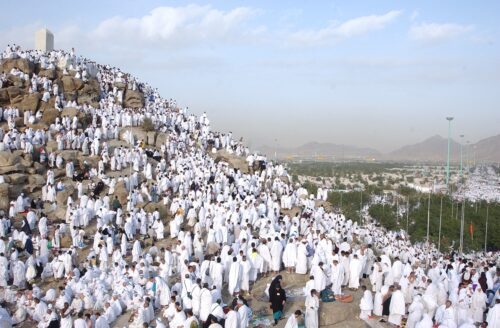 The literal meaning of the word Arafat is “to know.” Based on Islamic history, it is believed that after being taken out of Jannah and placed back on Earth, it was Mount Arafat where Prophet Adam (AS) and Hawa (AS) reunited. Mount Arafat is also commonly known as Jabal Arafat, which means the “Mountain of Mercy.” Moreover, it is the place where Prophet Muhammad PBUH stood and delivered the Last Sermon, also known as Khutbat al-Wada, to his companions and all Muslim pilgrims who accompanied him on the Hajjat ul-Wida.

Where Is Mount Arafat Located?

Mount Arafat beholds special significance during Hajj. Walking towards Mount Arafat and standing on staying there to pray is an essential part of Hajj; as said by Prophet Muhammad PBUH, “Hajj is Arafat.” [Al-Hakim] This means that whoever skips the part of standing on Mount Arafat, they miss Hajj.

On the 9th day of Dhul Hajj, also known as Day of Arafah, leave Mina for Mount Arafat. The last sermon (khutbah) is then delivered from Masjid-e-Nimra, and Zuhrain- combinational prayer of Zuhr and Asr – is prayed together by all the pilgrims in the valley of Mount Arafat. Later the pilgrims spend the entire day on Mount Arafat, invoking Allah SWT to forgive their sins.

What Happens at Mount Arafat?

On Mount Arafat, Muslim pilgrims spend their day making Dua. They combine the Zuhr and Asr prayers and stand until sunset, facing the Qibla, seeking forgiveness and requesting Allah SWT to shower his blessings over them.

It is said that on the day of Arafat, Allah SWT descends to the sky and says to the angels, “My slaves have come to Me, looking rough, from every deep valley hoping for My mercy, so if your sins were equivalent to the amount of sand or the drops of rain or like the foam on the sea I will forgive them. So go forth My slaves! Having forgiveness and for what or who you have interceded for.” [Tabarani]

What Is the Significance of Mount Arafat in Islam? 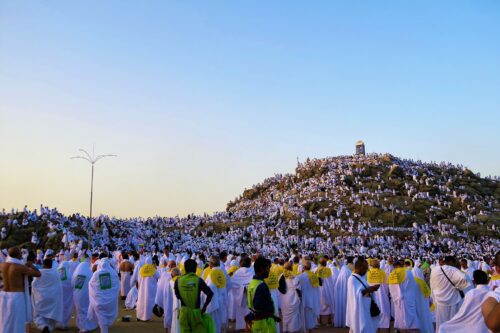 Reaching Mount Arafat provides pilgrims with the deepest feeling of satisfaction with relation to Hajj. Not only is it the only ritual of Hajj that is performed outside the boundaries of the Holy Kaaba, it is also known as the place where all prayers will be heard and fulfilled by Allah SWT.

Hazrat Aisha (RA) narrated that Prophet Muhammad PBUH, when asked about the importance of the day of Arafah, said, “There is no day in which Allah sets free more souls from the fire of hell than on the day of Arafat. And on that day Allah draws near to the earth and by way of exhibiting His Pride remarks to the angels, ‘What is the desire of these (servants of mine)?'” [Muslim]

Dua on the Day of Arafat

According to the Islamic traditions, Mount Arafat is a special mountain for Dua (supplication) as Prophet Ibrahim (AS) and Prophet Muhammad PBUH made Dua at this very spot. The virtue of this place is asking from Allah SWT, and His response is promised. Therefore it is advised that when praying at Mount Arafat, a pilgrim’s heart should be pure and filled with nothing but neediness. One should thank Allah SWT for all the blessings and ask for his forgiveness. The Dua to be recited on the day of Arafah is as follows:

Prophet Muhammad PBUH said: “The best invocation on the day of Arafat, and the best of all the invocations I ever offered or other holy Prophets before me ever offered is: “There is no god but Allah: He is Unique; He hath no partner, the whole universe is for Him and for Him is the praise, and He hath power over all things.”[Tirmidhi]

In another place, Prophet Muhammad PBUH said, “Apart from the day of the Battle of Badr there is no day on which the Shaitan is seen to be more humiliated, more rejected, more depressed and more infuriated, than on the day of Arafat, and indeed all this is only because of beholding the abundance of descending mercy (on the day) and Allah’s forgiveness of the great sins of the servants.” [Mishkat] 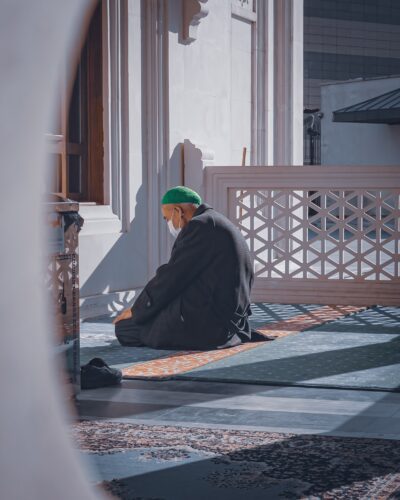 According to the teachings of Islamic traditions, it is believed that fasting on the day of Arafat expiates the sins of the past and the coming years. This can be proved by a narration of Abu Qatadah, who said that a man asked Prophet Muhammad PBUH, “O Messenger of Allah, what do you think of fasting on the day of Arafat?” To which the beloved Prophet Muhammad PBUH replied: “It expiates for the sins of the previous year and of the coming year.”[Muslim]

Fasting on the day of Arafah is considered mustahab (desirable) for those who are not participating in Hajj. For pilgrims, it isn’t a Sunnah because Prophet Muhammad PBUH didn’t fast on this day during the Farewell Pilgrimage.

The people of knowledge consider it recommended to fast on the Day of Arafat, except for those at ‘Arafat’. [Tirmidhi]

Here are some little known facts about Mount Arafat:

There are several stories associated with the name of Mount Arafat. Some say it was where Prophet Adam (AS) and Hawa (AS) met on Earth after being sent from heaven. While others say that Mount Arafat was the place where Hazrat Gabriel (AS) was teaching Prophet Ibrahim (AS) the scenes and rites, floating around him on the sacred mountain, telling him to repeat the words “I knew, I Knew.” However, Prophet Ibrahim (AS) kept on saying, “I know, I know,” which in Arabic is pronounced as Arafat.

Fact 2: It Is Where the Religion of Islam Was Perfected

On 9th Dhul Hajj, Allah SWT perfected the religion of Islam. Mount Arafat was the place where the following verses were revealed: “Today I have perfected for you your religion and completed upon you My blessing, and I have chosen for you Islam as (your) religion.” [Holy Quran 5:3]

Prophet Umar (RA) later clarified this by stating, “We surely know that day and the place where it was revealed upon the Prophet Muhammad PBUH. He was standing at ‘Arafat on a Friday.’” [Bukhari]

Fact 3: It Is the Place of Immense Forgiveness

Prophet Muhammad PBUH said, “There is no day on which Allah SWT frees people from the Fire more so than on the Day of Arafah. Indeed, He draws near and then boasts of them to the angels then says, “What do these want?”’[Muslim]

Therefore, it would be a wasted opportunity if a pilgrim spends their day on Mount Arafat without asking for forgiveness and the blessings of Allah SWT.

Mount Arafat is a granite hill located at the southeastern side of Makkah. It is the place where Prophet Muhammad PBUH delivered the Last Sermon. Mount Arafat holds great value in Islamic history and culture and is an essential part of Hajj.