The three-stone wall pillars situated in the tent city of Makkah, Saudi Arabia, are known as the Jamarat. They hold significant value in Islam because while performing Hajj or Umrah, it is a compulsory ritual for pilgrims to pelt the Jamarat in emulation of Prophet Ibrahim’s (AS) devotion to the command of Allah SWT.

The three pillars (Jamarat-al-Ula, Jamarat-al-Wusta, and Jamarat-al-Kubra) represent the locations where Prophet Ibrahim (AS) pelted Satan (Shaitan) with stones as he tried to dissuade him from sacrificing his son, Prophet Ismail (AS) in the way of Allah (SWT). Keep reading to learn more about the Jamarat.

Jamarat can be defined as the three stone pillars located in Mina within the boundaries of Makkah, Saudi Arabia. Hajj pilgrims pelt these pillars to commemorate the event when a 94-year-old father, Prophet Ibrahim (AS), was ready to sacrifice his 8-year-old son Prophet Ismail (AS) on the command of Allah SWT.

Lastly, the third Jamarat represents the temptation of Prophet Ismail (AS) against being sacrificed. Regardless of how much he tried, the Shaitan failed in all three instances.

The significance of the ritual can be understood from the following narration of Ibn Abbas:

“The Prophet (PBUH) seated al-Fadl behind him on his mount, and al-Fadl said that he did not stop reciting the Talbiyah until he stoned the Jamrah.” (Al-Bukhari: 1685 and Muslim: 1282)

Abd-Allah, in another instance, narrates: “He came to the largest Jamrah and put the House on his left and Mina on his right and stoned it with seven (pebbles), and he said: This is how the one to whom Soorat al-Baqarah was revealed (blessings and peace of Allah be upon him) stoned it.” (Al-Bukhari: 1748 and Muslim: 1296) 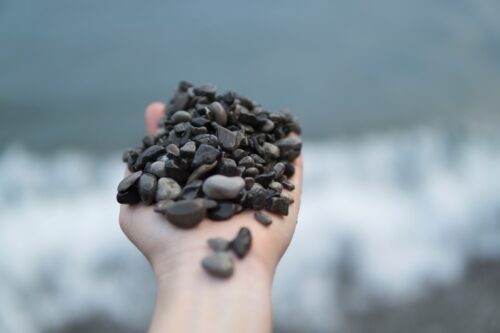 Jamarat is the plural for the Arabic word “Jamrah,” which literally means a small piece of a pebble or stone. However, here the term Jamarat represents each of the stone pillars involved in the ritual of Rami, i.e. stoning the devil.

Why Do Muslims Throw Stones at the Jamarat?

When a Muslim performs the ritual of stoning the Jamarat, it isn’t the pillars that they attack but rather the tricks of Satan (Shaitan) and our inner evil. The act gives Muslims the strength to dissociate themselves from Satan’s path, whispers, and effects and helps them replace it with the remembrance of Prophet Muhammad (PBUH) and faith in Allah SWT.

While pelting the Jamaraat, a pilgrim makes a firm resolution not to go back to the sins they used to commit, no matter how big or small, and to do whatever it takes to become a better Muslim.

The incident of Prophet Ibrahim (AS) throwing stones at Satan (Shaitan) is given permanence in the lives of Muslims by making it a compulsory ritual of Hajj and Umrah. It is otherwise known as the stoning of the Jamarat which is performed on the 10th Dhul Hajj. It is basically when after arriving in Muzdalifah, Muslims spend the night there collecting seventy (70) stones with the intention to pelt the pillars of Jamarat the next day in Mina.

The ritual of Rami not only symbolises the expulsion of evil worldly thoughts and Satan (Shaitan), it also serves as a lesson by giving pilgrims the strength to protect themselves from evil every day.

The three pillars of Jamarat in Makkah are named in order to explain the strength with which Satan (Shaitan) tried to dissuade Prophet Ibrahim (AS) from completing the sacrifice of his beloved son. Here is everything you need to know about the three pillars:

It is the smallest Jamarat and the first pillar. It is at the greatest distance from the point of sacrifice, and it is believed that Satan (Shaitan) tried his least efforts here. Jamarat Sughra is also nearest to Masjid Al-Khafy and farthest from Makkah.

Located between Jamarah-al-Kubra and Jamarah-al-Ula, Jamarah-al-Wusta is the middle pillar. It was originally shaped like an obelisk. However, in 2004/1425, it was transformed into a tall wall.

Although it is the largest, Jamarah-al-Kubra is situated nearest to the point where the sacrifice took place, and to Makkah. It is located on the mountainside of Mina and was reconstructed in 1376/1956-1957 to make more space for Hajj or Umrah to perform the ritual. Based on recent changes, Jamarah-al-Uqbah comprises a 1-metre thick wall and is 25-metres long. It is the place where Satan (Shaitan) made the utmost effort to persuade Prophet Ibrahim (AS). 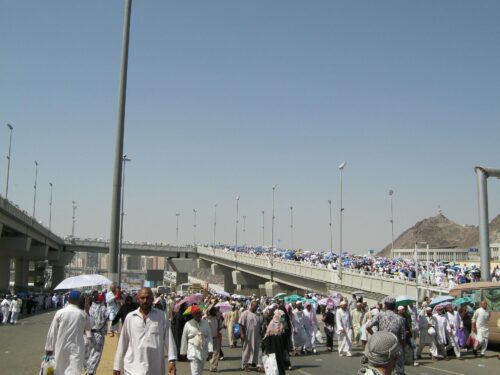 Constructed by the Saudi government, the Jamarat Bridge is a pedestrian bridge that connects all three Jamarat. This bridge is widely used by pilgrims while performing the ritual of Rami during Hajj. The primary purpose of the bridge is to allow pilgrims to safely throw stones at the three Jamarat pillars, either from the bridge’s height or from ground level.

Since its development in 1963, the Jamarat Bridge has been expanded and reconstructed several times. Today, the bridge has three openings and is strong enough to hold more than a million pilgrims at once.

The Jamarat are the three stone pillars located in Mina. These stone structures represent the locations of Satan (Shaitan), where he repeatedly attempted to discourage Prophet Ibrahim (AS) from carrying out Allah’s (SWT) command to sacrifice his eldest son, Prophet Ismail (AS).

Stoning the three Jamarat–Jamarat-al-Ula, Jamarat-al-Wusta, and Jamarat-al-Uqba—also known as Rami, is one of the main rituals of Hajj and Umrah. Every year, millions of Muslims come together to pelt the three pillars with the intention to commemorate the actions of Prophet Ibrahim (AS) and fight the evils of their soul, be it greed, pride, anger, and/or ego. Hajj is incomplete without performing the act of Rami.