Makkah is the Sacred City as well as the holiest and the absolute most honorable place on earth. The most truthful sources from which one can take news about its history are the Noble Quran and the authentic prophetic narrations in this regard, and from these we can ascertain its ancient history as well as how it was prior the message and prophet hood of Muhammad صلى الله عليه وعلى آله وسلم. After the advent of Islam, Muslim scholars and historians have endeavoured to record chronicles of Makkah in general history books as well as books concerned with the biographies of the Muslim scholars who lived in it.

One of the most famous being “Chronicles of Makkah and its Ancient Monuments” authored by Abu Al-Waleed Al-Azraqi from the third century AH. Thereafter, one scholar who is considered to be the most prolific author regarding it and its history was Imam Taqiyyud-Deen Al-Fasi Al-Makki (775 AH – 832 AH). He entitled his book “The Therapy for those who Harbour Affection for the History of the Sacred City”. 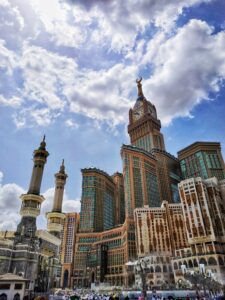 The establishment of Makkah, with the history and foundations of Makkah is directly connected to Prophet Ibrahim as he left his wife Haajar and his son Isma’il in that area in compliance with the command of Allah.

Imam Al-Bukhari reported on the authority of Ibn Abbas in the long narration in which the Prophet صلى الله عليه وعلى آله وسلم informed us that Ibrahim once came with his wife Haajar and his son Isma’il who was still a suckling infant, from ancient Syria to Makkah. At that time, Makkah had no water and nobody residing in it. Ibrahim took them both under the shade of a tree and left with them a bag of dates and a flask of water, then headed back to ancient Syria. As he was leaving, his wife Haajar called to him, saying: “Where are you going? How can you leave us in this deserted valley that has neither humans nor anything else (in terms of life)?” She repeated this a few times but he did not reply, so she asked: “Did Allah command you to do this?” Ibrahim replied: “Yes” Thereupon she said: “Then He shall never forsake us”.

The well of Zam Zam

Ibrahim walked for a while and then stood upon a small hill, raised his hands in supplication, and said, as Allah informs us saying: “Our Lord! I have settled some of my descendants in an uncultivated valley near Your sacred House, our Lord, that they may establish prayer. So make hearts among the people incline toward them and provide for them from the fruits that they might be grateful.” [Surah Ibrahim 14:37] Allah blessed Haajar and her son with the well of Zam-zam, and then people came from all directions and resided in Makkah. The first tribe to reside there was the tribe of Jurhum among whom Isma’il grew up and from whom he married. Ibrahim came many times to Makkah to check upon their condition, and later Allah commanded him to build the Ka’bah; Allah says: “And when Ibrahim was raising the foundations of the House and Isma’il, (saying): &#39;Our Lord! Accept (this) from us. Indeed, You are the Hearing, the Knowing.&#39;” [Surah Al-Baqarah 2:127]

Prophet Ibrahm (as) built the Kaaba

Allah also says: “And (O Muhammad), when We designated for Ibrahim the site of the House, (saying) “Do not associate anything with Me and purify My House for those who perform Tawaf (circumambulation of the Ka’bah) and those who stand (in prayer) and those who bow and prostrate.” [Surah Al-Hajj 22:26] .”

Abu Tharr narrated: “I asked the messenger of Allah: `O messenger of Allah! Which mosque was the first built on earth? ` He صلى الله عليه وعلى آله وسلم replied: “The Sacred Mosque (in Makkah)” “I then asked: `Which mosque was built next? ` He صلى الله عليه وعلى آله وسلم said: “The Aqsa mosque (in Jerusalem).” “Thereupon, I asked: `What was the period between the building of the two mosques? ` He replied: “Forty years.”&quot; [Al-Bukhari] These reports clearly highlight the virtue of Prophet Ibrahim and confirm that he was the one who built the two mosques, and that the period between the two was forty years.

Therefore, it becomes evident that the first thing to be established in Makkah was the Sacred Mosque (The Ka’bah), and that the first water to gush forth from it was Zam-zam. Thereafter, the offspring of Isma’il multiplied in the area of Hijaz (the province in which Makkah lies) and its surroundings, and their families succeeded each other in caring for the Sacred House and maintaining it for a long period of time, until the tribe of Khuzaa’ah took over this responsibility. People remained upon the monotheism with which Prophet Ibrahim came until the time when, Amr bin Lahy Al-Khuza’i introduced idol worshipping in the Ka’bah.

The changing era led to the number of idols being increased in the Ka’bah and this phenomenon spread all around the Arabian Peninsula to the extent that the number of idols in the Ka’bah reached three hundred and sixty, as stated by Al-Kalbi in his book “The Idols”. Due to numerous wars and tribal struggles, the well of Zam-zam was buried and people could no longer find it. Qusay bin Kilab, a great-grandfather of the Prophet Muhammad صلى الله عليه وعلى آله وسلم forcefully took over the custody of caring for the Sacred House and maintaining it from the tribe of Khuza’ah, as it had abused its authority.

Qusay gathered the scattered families of the Quraysh tribe, relocated them in Makkah, and restored the sanctity of Makkah. This marked the beginning of an authority that glorified Makkah and which freely offered all types of services to its visitors, such as food, water and the cleaning and maintaining of the Ka’bah. After Abdul-Muttalib (The Grandfather of the Prophet Muhammad صلى الله عليه وعلى آله وسلم) saw a dream in which he saw the exact spot of the buried well of Zam-zam, he had the area dug up and restored the well. Thus, the well of Zam-zam once again became the source of water to the pilgrims and visitors, as well as to the residents of Makkah.

The year of the Elephant

After this, a grave event took place during the time of Abdul-Muttalib when Abrahah the Ethiopian headed towards Makkah riding a huge elephant in order to demolish the Ka’bah. This is why that year came to be known as “The Year of the Elephant”, during which the Prophet صلى الله عليه وعلى آله وسلم was born. A city with such a magnificent history is worthy of having such an exalted status and should, therefore, be glorified and honoured. It deserves to occupy a special place in the hearts of its residents, as well as the Muslims in general. The Honorable Makkah, the Sacred and Secure valley on earth; Allah has distinguished it from among all places and made it sacred from the day He created the heavens and the earth.

The first House for Allah 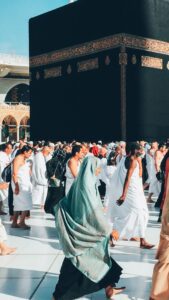 Allah commanded Prophet Ibrahim, may Allah exalt his mention, to build the first House on earth for Allah to be worshipped in at this spot and sent down the Black Stone from Paradise as a manifest sign of the sanctity of His Sacred House. In Makkah springs the finest water on the surface of the earth, the water of Zam-zam, which is food that suffices the hungry, and a cure for the sick. It is the water with which the chest and heart of the chosen Prophet Muhammad صلى الله عليه وعلى آله وسلم was cleansed in order to prepare him صلى الله عليه وعلى آله وسلم for the paramount mission from the Almighty Allah. Allah has made Makkah eternally sacred and secure; He Says:

“Have they not seen that We made [Makkah] a safe sanctuary, while people are being taken away (i.e. killed and taken captive) all around them?” [Surah Al-Ankabut 29:67] Allah has sent down blessings and mercy upon Makkah, the likes of which have not been bestowed upon any other place or person on earth. In order to make the matter clear, lest people confuse what is virtuous with what is not and what is sacred with what is not, Allah the Almighty sent down Angel Jibreel to point out the boundaries of the Sacred City, and Prophet Ibrahim placed signs marking its boundaries. Furthermore, Allah commanded His messenger, Muhammad صلى الله عليه وعلى آله وسلم to rebuild the structure of the House.

This, indeed, is a clear sign and evidence manifesting the sanctity and holiness of this Secure City. It was with the command of Allah that Prophet Ibrahim proclaimed to the people the Hajj (pilgrimage) and Allah took it upon Himself to convey the sound of the call all around the world. Thereafter, the caravan of the honourable prophets, the righteous and those who followed them began to respond and come forth to the Sacred City. Prophet Musa; the one who was honoured by the miracle of Allah speaking to him, came forth, as came Prophet Yunus; the one who was swallowed by the whale, as well as a multitude of other prophets.

The last and final Prophet صلى الله عليه وعلى آله وسلم openly announced his love of Makkah and its lofty status in the sight of Allah when he صلى الله عليه وعلى آله وسلم said, addressing it: “I swear by Allah! You are the best of the lands of Allah and you are the most beloved land to Allah.” [Al-Tirmidhi; Ahmad] How could we not glorify Makkah when it is a land that Allah Almighty has designated and singled out with the qualities of sanctity and of being glorified magnificently? How could we not glorify it when Allah has made it sacred, magnified the reward of performing good deeds in it, and has made its mention eternal by mentioning it in the Quran? Allah says: “That (has been commanded), and whoever honours the sacred ordinances of Allah – it is best for him in the sight of his Lord” [Surah Al-Hajj 22:30] Allah also says: “That (is so). And whoever honours the symbols (i.e. rites) of Allah – indeed, it is from the piety of hearts” [Surah Al-Hajj 22:32] The sacred ordinances and symbols (rites) of Allah refers to the Sacred City, the Sacred House of Allah, and sacred places within them, and it is due to their special qualities that Allah has distinguished them from all other cities and lands.

Honoring and glorifying the rites of Allah is accomplished by respecting this city, by realising its status and virtues, and by continually expressing gratitude upon seeing it, as well as by holding the matter of worshipping Allah within it in high esteem. This is so because the first House of worship ever to be built was in Makkah, and it is towards it that the hearts of the Muslims are directed from all places on earth. How can worship in it not then have such a high status and value? Allah made the reward of performing acts of worship in it multiples of that performed elsewhere and made the reward of a single prayer in the sacred mosque equivalent to a hundred thousand prayers in any other mosque. Additionally, fasting, spending in charity and all other acts of virtue in Makkah have a much higher reward than anywhere else in the world, higher than any other act of worship could reach in value.