According to the history of Islam, Wadi Al-Aqeeq was referred to as the “Blessed Valley” by Prophet Muhammad (PBUH). It runs along the western side of the boundary of Madinah, Saudi Arabia, and beholds tremendous importance in Islam. Wadi Al-Aqeeq plays an integral part in the history and civilization of the Arabian Peninsula. Read on to learn more about Wadi Al-Aqeeq.

What Is the Wadi Al-Aqeeq? 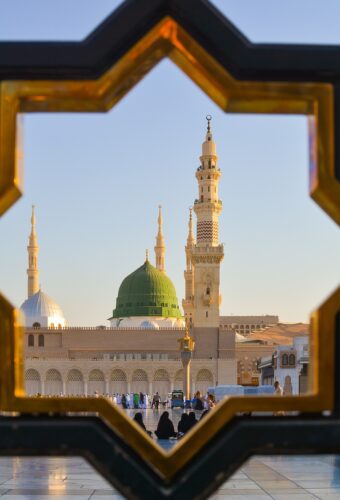 According to Islamic history, several places were built on the banks of Wadi Al-Aqeeq, especially during the Abbasid and Umayyad eras. In fact, it wasn’t uncommon to see farms, orchards, and large houses in the region of Wadi Al-Aqeeq.

Out of the many palaces built on the valley, some of them are said to have belonged to the family members and companions of Prophet Muhammad (PBUH), including Urwah bin Zubair (RA). Located in Madinah, the Urwah well is a prominent well built on Wadi Al-Aqeeq with the intent to draw water from Jabal Eir in order to supply water to the local citizens.

Notable landmarks nearby Wadi Al-Aqeeq include:

Where Is the Wadi Al-Aqeeq Located?

On stating the significance of Wadi Al-Aqeeq, Hazrat Umar (RA) said, “While the Prophet Muhammad (PBUH) was in Al-‘Aqeeq, he said, “Someone (meaning Gabriel) came to me from my Lord tonight (in my dream) and said, ‘Offer the prayer in this Blessed Valley” [Sahih Al-Bukhari]

In another place, Hazrat Sa’ad bin Abi-Waqqas (RA) narrates, “We were with the Prophet Muhammad (PBUH) at the Mu’arras, and he said, ‘Someone came to me saying, “You are in the Blessed Valley!”’ [Sahih Al-Bukhari]

Hazrat Abdullah bin ‘Umar (RA) narrated: While the Prophet Muhammad (PBUH) was passing the night at his place of rest in Dhul-Hulaifa in the bottom of the valley (of Aqeeq), he saw a dream, and it was said to him, “You are in a blessed valley.”

According to Islamic history, it is also believed that during the Caliphate of Hazrat Umar (RA), the floor of Masjid An-Nabawi (Prophet Muhammad’s (PBUH) mosque) was covered with soft stones from Wadi Al-Aqeeq. Some historical references have also confirmed that the water which flows through Wadi Al-Aqeeq is sweet in taste. It is believed to have been formed by a fissure near Madinah and is abundant with water in the winter months.

What Is the Castle of Urwah bin Zubair?

Otherwise known as Qasr Urwah, the Castle of Urwah bin Zubair (RA) is one of the best-preserved and most notable structures of Wadi Al-Aqeeq. The fertile land of the valley of Al-Aqeeq had several gardens, a significant number of water sources and was considered excellent for farming, due to which many companions of Prophet Muhammad (PBUH) built houses and decided to stay in Wadi Al-Aqeeq: one of these companions was Urwah bin Zubair (RA).

According to some narrations, Urwah bin Zubair (RA) bought a piece of land from Khawwat bin Jubair and constructed a large fort and farm, which still stands today.

Considered one of the most sacred valleys in Islam, Wadi Al-Aqeeq is situated in the western region of Madina, Saudi Arabia. Even today, Wadi Al-Aqeeq is replete with valleys spotted with green farms and is a major water source for the entire Baha Province. Also known as “The Blessed Valley,” Wadi Al-Aqeeq is also a renowned ziyarat spot as Muslims from all over the world do visit Wadi Al-Aqeeq when they come for pilgrimage (Hajj or Umrah).