Commonly known as Muharram-ul-Haram, Muharram is the first of twelve Islamic months according to the Hijri Calendar. It is also one of the four most sacred months in Islam. According to Islamic history, Muharram is the month in which Allah (SWT) increased the reward for fasting, rescued the people of Prophet Musa (RA), and miraculously brought Prophet Nuh’s (RA) ark to rest. Present at the start of the year, the month of Muharram gives Muslims a chance to ponder, reflect and start the new year in the most blessed way. Read on to learn about the virtues of Muharram.

Literally meaning ‘forbidden’, Muharram is one of the four sacred months (Dhul Hajj, Dhul Qa’dah, and Rajab). According to the Islamic teachings, the month of Muharram is so sacred that certain actions become forbidden during it, as they violate its sanctity. You can better understand the significance of Muharram in Islam because both the House of Allah (Al Masjid Al Haram) and the month of Muharram-ul-Haram derive their names from the same Arabic root. Both of them can be known as sacred spaces (or months) in which every deed- good or bad- weighs heavier on scales.

This automatically makes Muharram a special month simply because Allah (SWT) has chosen it to be. Allah (SWT) commands us to “not wrong ourselves” and have righteous behaviour and pure intentions in the holy month.

Being the first month of the Muslim Calendar or Hijri Calendar, Muharram marks the beginning of the Islamic year. Prophet Muhammad (PBUH) referred to Muharram as “the Sacred Month of Allah (SWT).” This made Muharram the only month with which Allah’s (SWT) name has been attached to and thus a highly blessed month for the followers of Islam.  Every year Muslims worldwide wait for the Holy Month with the aim to pray and ask for forgiveness. According to the lunar predictions, next year, Muharram is expected to be on Saturday, 30 July 2022.

Virtues of Fasting During the Month of Muharram 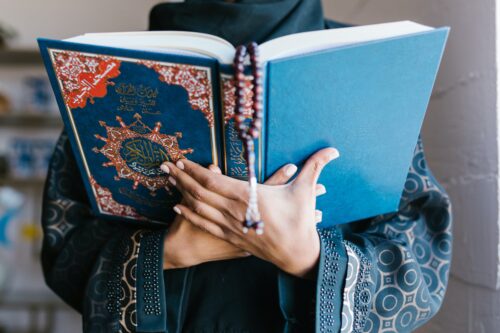 “The Messenger of Allah (peace and blessings of Allah be upon him) said: ‘The best of fasting after Ramadan is fasting Allah’s month of Muharram.” (Sahih Muslim)

Based on the Islamic culture and traditions, certain days of the year are considered more sacred as compared to others. One of them is the 10th Muharram, or commonly known as “The Day of Ashura.” The virtues of Muharram according to the Quran and Sunnah are as follows:

Virtue 1: Ashura Falls in the Month of Muharram

Not only due to its historical references but also because it comes in one of the four holy months in Islam, the day of Ashura is considered one of the holiest days in Islam. Following the command of the All-Mighty, Prophet Muhammad (PBUH) states in one of his Hadith, “The year is twelve months of which four are sacred, the three consecutive months of Dhul-Qa’dah, Dhul-Hijjah and Muharram, and Rajab Mudar which comes between Jumadah and Sha’ban.” (Sahih Al Bukhari)

Virtue 2: It Is the Day Allah (SWT) saved the People of Israel

According to the narration by Imam Ahmad (May Allah have mercy on him), it was the 10th of Muharram when the journey of the ark of Prophet Noah (RA) came to an end on the side of Mount Judi. It’s said that Prophet Noah (RA), on the command of Allah (SWT), built an ark to carry his followers, his family, and pairs of all world animals to a safe location. Though the ark was caught in a dangerous storm, it safely reached its destination on the day of Ashura.

Virtue 4: Prophet Muhammad (PBUH) Used to Fast on 10th Muharram before Prophethood was Gifted to Him

Imam Malik (may Allah have mercy on him) in his book Muwatta mentions that following the tradition of Prophet Ibrahim (RA) even in the period of Jahiliyyah (ignorance), the polytheists of Makkah would observe fast on 10th Muharram. Therefore, even before prophethood was gifted to him, Prophet Muhammad (PBUH) used to fast on 10th of Muharram. In another narration, Imam Al Qurtubi (may Allah have mercy on him) says, “Perhaps Quraysh used to fast on that day based on some past law, such as that of Prophet Ibrahim (RA).”

Virtue 5: Fasting On this Day was Always Obligatory

According to Islamic history, even before it was made obligatory for the Muslims to fast in Ramadan, Prophet Muhammad (PBUH) and his followers would observe a fast on the same day (10th Muharram). Hazrat Aisha (RA) narrates in a hadith, “Allah’s messenger (PBUH) ordered (the Muslims) to fast on the day of ‘Ashura, and when fasting in the month of Ramadan was prescribed, it became optional for one to fast on that day (Ashura) or not.” (Sahih Al Bukhari)

Ibn Abbas (may Allah be pleased with him) narrates, “The Prophet (peace and blessings of Allah be upon him) came to Madinah and saw the Jews fasting on the day of ‘Ashura.’ He (PBUH) said, ‘What is this?’ They said, ‘This is a righteous day; it is the day when Allah saved the people of Israel from their enemies, so Musa fasted on this day.’ He (PBUH) said, ‘We have more right to Musa than you,’ so he fasted on that day and commanded [the Muslims] to fast on that day.” (Sahih Al Bukhari)

Virtue 7: Fasting on This Day Expiates an Entire Year’s Sins

On the importance of fasting in Muharram, Prophet Muhammad (PBUH) said, “I hope that Allah (SWT) will accept it (fasting on the day of Ashura) as expiation for the previous year.” (Sahih Al Bukhari)

The day of Ashura holds great importance in Islam. On several occasions in his life, Prophet Muhammad (PBUH) guided his followers to fast on 10th Muharram. While narrating this, Ibn ‘Abbas (may Allah be pleased with him) said that “I never saw the Messenger of Allah (peace and blessings of Allah be upon him) so keen to fast any day and give it priority over any other than this day, the day of ‘Ashura,’ and this month, meaning Ramadhan.” (Sahih Al Bukhari)

Virtue 9: Spending on Family on This Day Brings Blessings

According to the teachings of Islam, observing fast on the day of Ashura (10th Muharram) is a way to attain great blessings for entire upcoming year. Prophet Muhammad (PBUH) on this said, “One who generously spends on his family on ‘Ashura (10th of Muharram), Allah will be generous on him for the entire year.” (Al-Bayhaqi, Shu’ab al-Iman)

Virtue 10: Don’t Forget to Fast on 9th of Muharram

Prophet Muhammad (PBUH) in before passing away, said, “If I live to see the next year, God willing, we will fast on the ninth day too.” (Muslim)

The primary reason for fasting on the ninth and tenth of Muharram is to distinguish the Muslim fast from the fasting of the Jews. (Imam Nawwawi)

What Does the Quran Say about Muharram?

In reflection to Muharram being one of the four sacred months, Allah (SWT) says: “Verily, the number of months with Allah is twelve months (in a year), so was it ordained by Allah on the Day when He created the heavens and the earth; of them, four are Sacred, (i.e., the 1st, the 7th, the 11th and the 12th months of the Islamic calendar). That is the right religion, so wrong, not yourselves therein” [Surah At-Tawbah 9:36].

Muharram is the first month in the Islamic lunar calendar. With the right intentions, every single action in the month of Muharram will be rewarded, saying Salam more, giving regular sadaqah, seeking forgiveness, improving your health, or being humble. The top ten virtues of Muharram are listed below: