Masjid Nabawi was originally constructed and established by Prophet Muhammad (PBUH). It is located in Madinah, Saudi Arabia, and is considered the second holiest mosque in Islam after the Great Mosque (Masjid Al-Haram) in Makkah. Throughout history, Masjid al Nabawi has been renovated many times.

The current structure of the Prophet’s (PBUH) Mosque dates back to the early 1990s. Featuring a beautiful green dome, on the white marbled floors of Masjid Nabawi lie the tears of billions of Muslims. The Prophet’s mosque is a place known to every true believer of Allah SWT and the descendants of Prophet Muhammad (PBUH). Read on to learn more about Masjid Nabawi and its significance in Islam.

What Is Masjid An-Nabawi? 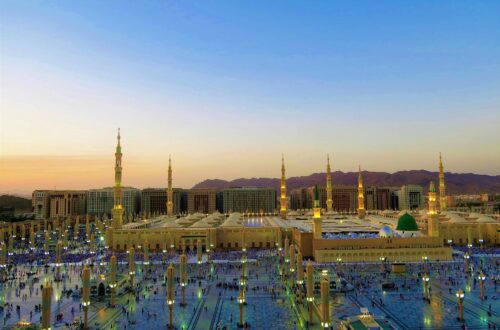 The holy city of Madinah has grown exponentially over the years. Also known as the Prophet’s Mosque, Masjid Nabawi isn’t only the city’s focal point, but it is also known as “The heart of Madinah.” Prophet Muhammad (PBUH) established the mosque in the first year of Hijrah (migration) with the intention to create a place where congregational prayers were to be offered five times a day without any hurdles.

Despite being a place of spirituality, many political, legal, and social activities were carried out in the Prophet’s Mosque. Today, it is one of the most popular places of Ziyarat for Muslims.

What’s So Special about Masjid Nabawi?

Masjid Nabawi is the second holiest and largest mosque in the world. It was constructed by Prophet Muhammad (PBUH) after migration in 622 CE, adjacent to his house in Madinah, Saudi Arabia.

The Prophet’s Mosque has been extended over the years; the latest renovations were made in the 1990s.

Its open-air architectural structure has a raised platform for reciting the Holy Quran. One of the most notable structures of the Prophet’s Mosque is the green-coloured dome at the centre of the mosque. This is where the graves of Prophet Muhammad (PBUH), Umar (RA), and Abu Bakr (RA) are located.

Prophet Muhammad (PBUH), on visiting Masjid Nabawi, said, “Whoever visits me after my death is like he who had visited me during my life. When a person stands at my grave reciting blessings on me, I hear it, and whoever calls for blessings on me in any other place, his every need in this world and in the hereafter is fulfilled, and on the day of Qiyamah I shall be his witness and intercessor.”

The significance of the mosque of Prophet Muhammad (PBUH) can be understood by the Hadiths mentioned below:

“Do not prepare yourself for a journey to any mosque [with the intention to earn a special reward of prayers] but the three mosques al-Masjid al-Haram, al-Masjid al-Aqsa, and my mosque.” (Bukhari: No. 1115)

Praying inside Masjid Nabawi guarantees a thousand times more rewards for the believers:

“One prayer in my mosque is better than one thousand prayers in any other mosque except al-Masjid al-Haram.” (Bukhari: No. 1116)

Why Is It Called “Nabawi”? 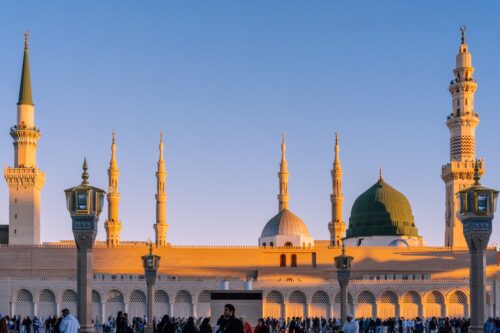 The Messenger of Allah (PBUH) courteously and kindly declined all offers. He then got his she-camel Qaswa, and instructed the people, “[This camel] is commanded by Allah; wherever it stops, that will be my home.”

Qaswa continued walking south until she stopped and knelt in a large courtyard owned by two orphan brothers, Suhail (RA) and Sahil (RA). Prophet Muhammad (PBUH) said, “This is the home.” The land was an ideal choice for the construction of Masjid Nabawi as it contained graves of polytheists, several date trees, boxthorn bushes and was the resting ground for herds of cattle. Prophet Muhammad (PBUH) bought the land in 10 dinars after speaking with Asad ibn Zurarah (RA), the guardian of the orphan boys.

The Messenger of Allah (PBUH) then ordered the Muhajireen and Ansar to remove the boxthorn bushes and dig the graves to level the land. Prophet Muhammad (PBUH) and his companions began the construction of Masjid Nabawi using kneaded clay and bricks made from stone. Over the years, the Prophet’s Mosque has been renovated and expanded several times, especially during the reign of the Ottoman Empire.

Some must-visit places inside Masjid Nabawi include:

Has Masjid Nabawi Been Mentioned in the Qu’ran?

Masjid Nabawi is one of the sacred mosques mentioned in the Holy Quran. Allah SWT in Surah Al-Taubah says that the foundation of the Prophet’s Mosque was laid on piety. “Verily, the mosque 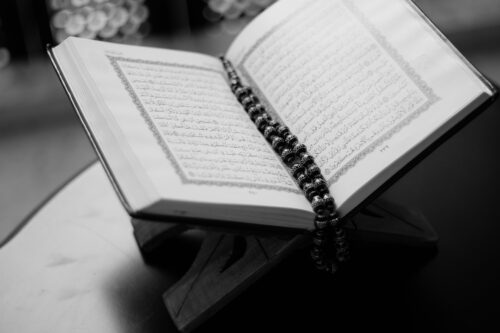 whose foundation was laid from the first day on piety is more worthy that you stand therein (to pray). In it are men who love to clean and to purify themselves. And Allah loves those who make themselves clean and pure.” (Surah Al-Taubah, 108)

Abu Hurairah (RA) narrated that Prophet Muhammad (PBUH) while referring to the Quranic verse: “It is only those who have knowledge among His slaves that fear Allah. Verily, Allah is All-Mighty, Oft-Forgiving,” (Fatir, 28), said, “Whoever will come to my mosque with the only intention to conduct teaching/learning activities and to promote beneficial knowledge will have his reward equivalent to the person who fights in the path of Allah (SWT). A person who has some other purpose in his mind is like an individual who is looking towards others’ wealth.”

Where Is the Prophet’s (PBUH) Mosque Located?

Masjid Nabawi is located in the Al Haram region of Madinah, Saudi Arabia. Click here for the exact location of the Prophet’s Mosque on Google Maps.

Do you want to watch live coverage of Masjid Nabawi? Click on the link mentioned below to watch the 24/7 live coverage of the mosque of Prophet Muhammad (PBUH), including the five congregational prayers and the Tahajjud and Taraweeh prayers during the holy months of Ramadan and Dhul-Hajj:

Facts about the Prophet’s (PBUH) Mosque

Every pillar, window, and dome of Masjid Nabawi tells a story. These subtle secrets and signs honour historical events that have great significance in Islam. Even though the Prophet’s Mosque is a place known to every Muslim who has ever lived, there’s still a lot we don’t know. Here are some lesser-known facts about Masjid Nabawi:

Otherwise known as the Hujrah, the scared chamber is situated outside Masjid Nabawi and has a golden vault in front of it. It is the place marking Prophet Muhammad’s (PBUH) final residence and death. The Hujrah was originally the home of Prophet Muhammad’s (PBUH) beloved wife Aisha (RA). It is also the resting place of Umar (RA) and Abu Bakr (RA).

“Anyone who comes to visit me and he came solely for this purpose then It becomes Wajib upon me to do intercession for him on the Day of Judgment.” (Tabrani)

Typically a mosque has only one mihrab. However, being the second-largest mosque in the world, Masjid Nabawi has three. Post expansion and renovation, the main (or current) mihrab is the one used today by the Imam of Masjid Nabawi to lead congregational prayers. The second mihrab is called Ahnaf Mihrab or Suleymanyah. It is set behind the first one and constructed on the orders of Sultan Suleyman for the Hanafi Imam to lead prayers. The third one is called the Prophetic Mihrab, as it covers the entire area where Prophet Muhammad (PBUH) used to lead Salah, except where he placed his feet. The Maliki Imam leads prayers inside the Prophetic Mihrab.

Fact 3: Riadh-ul-Jannah – The Backyard of Paradise

Riadh-ul-Jannah is located within Masjid Nabawi. It is 15 metres wide and 22 metres in length, and some part of it is connected to the chamber of Prophet Muhammad (PBUH). In one of his narrations, Abu Hurairah (RA) stated that Prophet Muhammad (PBUH) said: “Between my house and my pulpit lays a garden from the gardens of Paradise, and my pulpit is upon my fountain (Al-Kauthar).” (Bukhari)

The above-mentioned Hadith highlights the importance of Riadh-ul-Jannah. It is said that the garden is similar to the ones present in Jannah (Paradise), hence its name. Therefore, when visiting the mosque of Prophet Muhammad (PBUH) do remember to pray inside Riadh-ul-Jannah as it is equivalent to praying in Jannah.

Fact 4: The Dome of Masjid Nabawi Used to Be Purplish-Blue

You might be surprised to learn that the signature green-coloured dome of Masjid Nabawi wasn’t always green. Throughout historical renovations of the Prophet’s Mosque, the colour of the dome has also changed. According to the history of Islam, it is believed that around 150 years ago, the dome of Masjid Nabawi used to be white, whereas, for the longest period, the dome was purplish-blue as the Arabs of Hejaz were particularly fond of that colour at the time.

Fact 5: Masjid Nabawi Is Larger Than the Old City of Yathrib (Madinah)

Currently, Masjid Nabawi covers an area of 8.672 square metres, which is 100 times more than the size of the initially constructed mosque. This means that the architectural structure of Masjid Nabawi expands over the entire area of the old city of Madinah. It can be understood by the fact that Jannat Al-Baqi, which used to be a cemetery situated on the outskirts of Madinah, is now a significant part of the mosque of Prophet Muhammad (PBUH).

Fact 6: The Mosque Constructed by Prophet Muhammad (PBUH) Had No Dome at First; Now It Has Two

Did you know that for more than 650 years after Prophet Muhammad’s (PBUH) death, there was no dome over Masjid Nabawi? The first dome was constructed from wood by Mamluk Sultan in 1279. The impeccably beautiful green dome that we all see today is actually the much larger outer dome covering the room of Prophet Muhammad (PBUH). Most people don’t know that there is another dome (a smaller inner dome) that has the names of Umar (RA), Abu Bakr (RA), and Prophet Muhammad (PBUH) inscribed on the inside.

Masjid Nabawi was built by Prophet Muhammad (PBUH) in 1 AH (622 CE) shortly after migration. The Prophet’s Mosque was originally small and constructed using palm fronds and mud bricks. Over the years, Masjid Nabawi has gone through several renovations and expansions, making it one of the largest mosques in the world today. It is the most-visited site of Ziyarat as the graves of Prophet Muhammad (PBUH), and his companions (PBUT) are situated here. Every year, millions of pilgrims, after the completion of Hajj or Umrah from Makkah, visit Masjid Nabawi to pray 40 Rakats