Every day after the obligatory salah in Masjid Nabawi, it is commonplace to see a janaza prayer follow immediately after. The bodies thereafter are carried to top left corner of the mosque compound where there is an entrance to the cemetary, known as Jannat Al Baqi’. Baqi’ refers to land embedded with the roots of different trees.

What is Jannat Al Baqi?

It is the oldest and first designated Muslim cemetary in Madinah.

Who is buried in Jannat-ul Baqi?

The first man to be buried here was As’ad bin Zurara (ra), an Ansari companion, and the prophet (ﷺ) chose him to be buried in this place.

who was the first companion to be buried in jannatul baqi?

The first companion of the Muhajiroon to be buried here was Uthman ibn Maz’oon (ra) who died shortly after the battle of Badr. This cemetary is the resting place of a large number of relatives and companions of the prophet (ﷺ) including his beloved wife A’isha (ra) who had initially intended to be buried next to her father and husband (ﷺ) but gave up her spot to Umar (ra) upon his request. Many of the other Mothers of the Believers were buried here also: Sawda bint Zamaa, Hafsa bint Umar, Zaynab bint Khuzaymah, bJuwairiya bint Harith, Umm Habibah bint Abu Sufyan, Safiyyah bint Hayy al Akhtab, Zainab bint Jahash, Umme Salamah bint Abu Umama (ra).The first member of the prophet’s (ﷺ) family, Ahl-al-Bayt, to be buried here however was Muhammad’s (ﷺ) daughter, Ruqayyah, who passed away in 624 CE.

There are a number of ahadith which refer to Baqi’ in the authentic traditions. The prophet (ﷺ) prayed for the ones buried in Baqi’ as A’isha (ra) reported that whenever it was her turn to spend with Messenger of Allah (ﷺ), he used to go to the Baqi’ (graveyard in Al-Madinah) at the last part of night and say, “May you be safe, O abode of the believing people. What you have been promised has come to you. You are tarried till tomorrow and certainly we shall follow you if Allah wills. O Allah, forgive the inmates of the Baqi’-al- Gharqad.” (Sahih Muslim Book:1, Hadith: 582). Furthermore, he (ﷺ) prayed the janaza in absentia for Najashi along with his (ﷺ) companions.

The below diagram put together by Islamic GPS and IslamicLandmarks.com shows the areas of some notable companions buried at Baqi’. 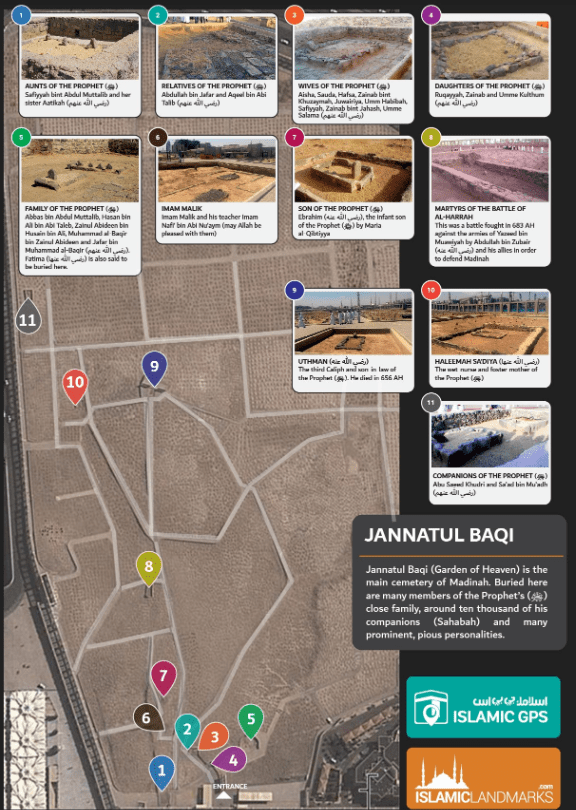 May Allah forgive the Muslims buried in Baqi’, from the early generations to the later, and raise their ranks in Paradise.