The Multazam, also known as the place of clinging, is a two-meter wide area between the door of the Holy Ka’bah and Hajr-al-Aswad. According to Islamic beliefs, it is the area where all supplications (du’as) are accepted. Other names of the Multazam include Al- Muta’wwath and Al-Mad’a. Keep reading to learn more about what is Multazam.

Where Is the Multazam Located? 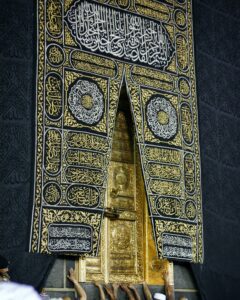 “I saw Amir ibn Maymoon, May Allah be pleased with him, embracing what is between the corner and the door of the Ka’bah.”

What Does the Word “Multazam” Mean?

The word Multazam literally means “clinging.” However, according to Islamic, Multazam can be defined as the place of clinging between the door of the Ka’bah and the Black Stone. According to Islamic belief, every supplication (dua) made in the area of Multazam will be accepted by Allah.

The sacred place has been given the name Multazam, as Muslims perform Iltizam here; they cling onto the Holy Ka’bah with their face, chest, and hands inclined against its wall while asking for whatever they desire.

Where Duas Are Accepted 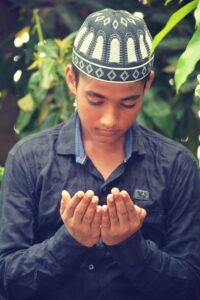 As stated earlier, for your supplication to be fulfilled, it is considered a Sunnah to hold the wall of the Holy Ka’bah in a way that your chest, cheek, and hands are against the walls.

It is believed that every prayer a Muslim makes in the Multazam is accepted, in support of which Abdullah bin Abbas (RA) said, “The signs of acceptance for any dua made between the Hajar al-Aswad and the door of the Ka’bah will certainly be seen.” [Akhbaar Makkah by Faakihi – Hadith 23]

The Door of the Ka’bah

The door of the Holy Ka’bah is located on the eastern side at the ground level. According to Islamic history, during the construction of the Holy Ka’bah, the door was first installed by Prophet Ibrahim (AS). At that time, Prophet Ibrahim (AS) created two openings – one at the east for the people to enter, and one at the west. However, it is believed that the first real door installed in the Ka’bah was by King Tubba in 4 CE.

The height of the eastern door was raised during the rebuilding of the Ka’bah by the Quraysh, whereas the opening on the west side was permanently sealed. Since then, there has only been one opening to the Holy Ka’bah, which has been renovated three times. The first one was during the era of Sultan Murad in 1630 CE; it was when the Egyptian craftsmen modified the design by manufacturing a new door from silver and gold.

Following this, in 1994, during the reign of King Abdul Aziz Bin Saud, the new aluminum and iron-based door with plates of silver and gold was installed in the Holy Ka’bah. However, the aluminum door got scratched. King Khalid in 1997 assigned renowned craftsmen of Saudi Arabia to the same task.

The new (present) door of the Holy Ka’bah is created with 280 kilograms of pure gold. The 3.1-meter tall door was manufactured from 2.5 cm-thick aluminum. It was coated with silver plates that dipped in gold. Moreover, 15 of the 99 names of Allah have been embossed on the door along with several Quranic verses.

Why Is the Door of the Ka’bah So High?

“Your people did it so that they could permit into the Ka’bah only those people whom they approved of and could prevent those whom they pleased. Had your people not been recently removed from ignorance and had I not feared that they would be averse to change, I would have included the Hateem within the Ka’bah and brought the door level with the ground.”

What Is Inside the Ka’bah?

The interior of the Ka’bah can be described as a cubical structure that is 50 ft in height, 35 ft in length, and 40 ft in breadth. It is merely an empty space with nothing but three pillars supporting the roof of the Holy Ka’bah. It also has beautifully crafted silver and gold lamps suspended from the walls.

What Is the Purpose of the Ka’bah?

The Holy Ka’bah is considered the home of Allah. It is located in the middle of the Great Mosque in Makkah, Saudi Arabia. It is the Ka’bah that the Muslims turn towards while performing the daily five prayers. They also perform Tawaf by walking around it during Hajj and Umrah.

Summary – What Is the Multazam

The Multazam is a two-meter-wide sacred area where all supplications (duas) are accepted. Located between the door of the Holy Ka’bah and the Hajr-e-Aswad, Muslims from all over the world come here to ask Allah for forgiveness and wish for whatever they want.