What Is the Importance of Hajj to Muslims?

Being one of the five mandatory pillars of Islam, the act of Hajj can be defined as the annual pilgrimage to the house of Allah SWT in Makkah, Saudia Arabia., Muslims are expected to perform it at least once in their life. Every year, around 2 million Muslims visit the Holy Kaaba to perform Hajj (Pilgrimage), a five-day event taking place in Dhul Hajj (the last Islamic month). Performed in the sacred state of Ihram, Muslims are strictly forbidden to engage in any type of sin. Tis includes arguments, violence, sexual activity, and even trimming or cutting their hair and nails. Muslims are advised to adopt a calm demeanor throughout the pilgrimage. Read on to learn more about the importance of Hajj in Islam.

Who Goes to Hajj?

According to Islamic rules and regulations, literally meaning “to intend a journey,” Hajj is mandatory for every Muslim who has a sound mind and is financially and physically capable of performing Hajj once in their lifetime. Also, those who complete the pilgrimage add the title of Hajji to their name. Although there is no obligation on children to perform Hajj, if they want, they can participate in Hajj with their guardian or parents. Moreover, if someone is sick or suffering from a chronic disease, another person can be appointed as a “proxy” to perform Hajj on their behalf.

Where Is Hajj Performed?

In the last month of the Islamic calendar, Hajj takes place in Makkah, Saudi Arabia.

Is Hajj the Most Important Pillar?

Amongst all the five pillars of Islam, Hajj is the most divine ritual. It is compulsory for every Muslim who is financially and physically capable of actively participating in the sacred event. Hajj is performed annually from 8th to 12th Dhul Hajj while making sure that all religious rituals therein are completed according to the methods and conditions of Islam. Moreover, even today, Muslims strictly adhere to following the established pattern of Hajj set by Prophet Muhammad (PBUH).

Importance of Hajj and Umrah Mentioned in the Quran and Hadith

When Muslims intend to perform Hajj, they are often reminded that the opportunity of pilgrimage is actually an invitation from Allah SWT to His house – the Holy Kaaba. Supporting the spirit of brotherhood, unity, and equality, the sacred event of Hajj brings together Muslims from all over the world. It is said that whoever performs Hajj with a pure heart returns home free from their lifelong sins. Apart from symbolizing positivity and kindness, Hajj being a re-enactment of obedience and sacrifice of Prophet Ibrahim (AS) to Allah SWT is the highest form of honour earned by a Muslim. 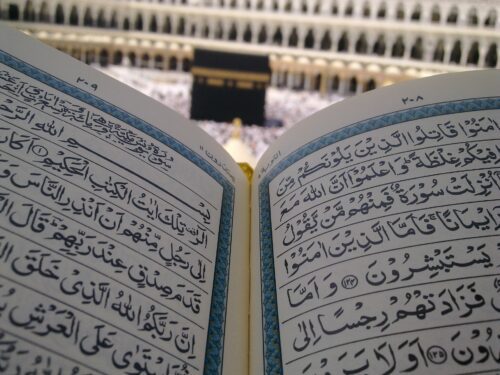 On the importance of Hajj, Allah SWT mentions in the Quran, “When We made the House [i.e., the Ka’ba] a place of return for the people and [a place of] security. And take, [O believers], from the standing place of Abraham a place of prayer. And We charged Abraham and Ishmael, [saying], ‘Purify My House for those who perform tawaf and those who are staying [there] for worship and those who bow and prostrate [in prayer].” (Qur’an 2:125)

In another place, the Holy Quran states the following about the importance of Hajj: “Verily, the first House (of worship) appointed for mankind was that at Bakkah (Makkah), full of blessing, and guidance for Al-‘Alamin (the mankind and jinns). In it are manifest signs (for example), the Maqam (place) of Ibrahim (Abraham); whosoever enters it, he attains security. And Hajj (pilgrimage to Makkah) to the House (Kaaba) is a duty that mankind owes to Allah, those who can afford the expenses (for one’s conveyance, provision, and residence); and whoever disbelieves [i.e. denies pilgrimage to Makkah), then he is a disbeliever of Allah], then Allah stands not in need of any of the ‘Alamin (mankind and jinns).” (Surah Al-Imran, 96-97)

“But those who believe and do deeds of righteousness. We shall soon admit them to Gardens, with rivers flowing beneath, to dwell therein forever. Allah’s promise is the truth, and whose word can be truer than Allah’s?” (Qur’an 4:122)

Prophet Muhammad (PBUH), on acknowledging Hajj as a pillar of Islam, said, “Islam is based on five fundamentals: to proclaim that there is no god but Allah and Muhammad (PBUH’s) is the Messenger of Allah, and to establish the prayer, and pay Zakat, to offer pilgrimage of the House [of God] and to fast during Ramadan.” (Sahih Bukhari, No: 7)

“Anyone that performs Hajj for ALLAH’s pleasure and avoids all forms of sin will return free from all sins, similar to as he was on his birth day.” (Sahih Bukhari and Muslim)

In another place, Abu Hurairah (may Allah SWT be pleased with him) reported that Prophet Muhammad (PBUH), highlighting the importance of Hajj, said, “O people! Allah has prescribed Hajj upon you, so perform it.” He also narrated, “Pilgrims and those performing Umrah are ALLAH’s guests; their prayers are answered, and their supplications for forgiveness are granted.”

Top 5 Reasons Why Hajj Is Important

Here are five reasons outlining the significance of Hajj to Muslims:

Reason 1: Hajj Washes Away All of Your Sins

Abu Hurairah (may Allah SWT be pleased with him) in an event said that he heard Prophet Muhammad (PBUH) saying, “Whoever performs Hajj for the sake of Allah and does not utter any obscene speech or do any evil deed, will go back (free of sin) as his mother bore him.” (Sahih Al-Bukhari)

The sacred act of Hajj motivates Muslims to do good deeds by polishing their consciences and enhancing their moral senses. It plays a vital role in rebuilding the foundation of purity, honesty, and integrity in the heart of every individual, encouraging a righteous and positive Muslim society.

A Muslim during the pilgrimage journey in the holy city of Makkah might face several difficulties and hardships when settling into the new environment. From the patience during the challenging ritual of Hajj to the process of submission that calms and composes one’s soul, the act of Hajj builds the character of every Muslim standing in the House of Allah SWT.

Reason 4: Hajj Is the Way to Earn the Reward of Jihad for Women

Jihad is to fight in the name of Allah SWT against the apostles of Islam. According to a narration by Hazrat Ayesha (RA), Prophet Muhammad (PBUH), in an event, said, “O Allah’s Apostle! We consider jihad as the best deed.” However, “The best jihad (for women) is Hajj Mabrur.” (Sahih Bukari; Haj; 595)

Reason 5: The Reward for Hajj Is Jannah

Allah SWT has promised that whoever performs Hajj with a pure heart will be rewarded with paradise or Jannah. This can be proved by a hadith that says, “From one ‘Umrah to another is the expiation for what is between them, and Hajj Mabrûr has no reward except Paradise.” (Bukhari and Muslim)

Social Benefits of Going to Hajj

From a social point of view, every year, people of all races, colors, and backgrounds come for Hajj from around the world. These people have countless differences but only one thing that binds them together: Islam. Regardless of their financial and physical differences, everyone performs Hajj in the same manner, exhibiting equality, unity, purity, and hope. The clothing of Ihram eradicates differences between nationalities and worldly status and strengthens the identity of Muslims. It represents the fact that all Muslims are equal in the eyes of Allah SWT.

Summary – The importance of Hajj to Muslims

Also known as the fifth pillar of Islam, Hajj should be performed by all sahib-e-hasiyat (financially sound) Muslims at least once in their lifetime. The physically demanding and religiously purifying journey offers Muslims the chance to wipe their sins and start anew before Allah SWT. During Hajj, every Muslim pilgrim is considered as a guest of Allah SWT. May Allah SWT bless all of us with the sacred opportunity to perform Hajj. Ameen!