How to perform Umrah For Ladies

If you are a woman performing Umrah for the first time, you may be searching for a guide on how to perform Umrah for ladies specifically.

The good news is that you’ve come to the right place. 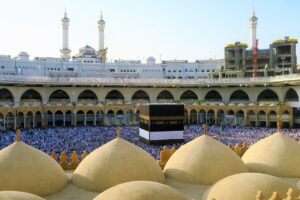 Women will have different concerns to men when performing Umrah, such as what to do when menstruating, if a woman can travel without a mahram to perform her Umrah, and even what to wear once when entering the state of ihram for Umrah. Even for Hajj, females should be aware of all of the steps they will do differently to men in order to ensure the rituals are performed correctly.

When it comes to the rituals of performing Umrah, there’s little that men and women actually do differently – but if you are looking for Umrah packages now, it’s vital that you make a note of the information in this article for your pilgrimage, particularly if you’re performing Umrah for the first time. We’ve put together a piece of cake ‘General Guide’ for women below to give you one less thing to stress over, summarising the key differences that women should be aware of.

Keep a notebook handy to jot down these points.

General guide for women while at Umrah:

Rules of Umrah for Women

If this is your first Umrah, don’t fret! Women can partake in all of the rituals such as Tawaf and Sa’ee, while expecting the same reward that men do – except that there are some rules specific to women performing Umrah. It is essential for female pilgrims to be equipped with the correct information without blindly following others, as an accepted Umrah is contingent on many factors (not the umrah packages and how many stars the hotel has!)

There aren’t many of them, but you’ll want to remember these key differences.

What duas to recite while at Umrah

Our beloved Prophet Muhammad ﷺ taught us the best duas to make during Umrah, which we have compiled together for you here.If you have booked an Umrah package, you may have a guide who informs you of these duas from the sunnah, but don’t miss out on the chance to follow in the footsteps of the Prophet ﷺ – make a note of these and prepare yourself now!

You will definitely also want to make a list of some of your treasured duas for Umrah, taking advantage of every moment to ask Allah for what your heart seeks. Make use of the blessed time you during Tawaf and Sa’ee to call upon Allah with an open heart, and don’t limit yourself. Go big!

Can a woman perform Umrah alone? 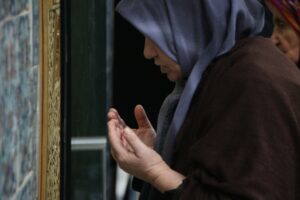 A mahram is a male relative who is forbidden for a woman to marry due to kindship, breastfeeding or marriage. A woman’s husband won’t fall under the category of mahram as she is able to marry him, therefore she should be accompanied by either a mahram or her husband.

In fact, the importance of a mahram has been stated by the Prophet ﷺ in a hadith narrated by Ibn ‘Abbas (ra):

“A man must never be alone with a woman unless there is a Mahram with her. A woman also may not travel with anyone except with a Mahram.” [1]

In the same hadith, a man asked the Messenger of Allah ﷺ

“O Messenger of Allah! My wife has gone for Hajj while I am enlisted for such and such a battle, what should I do?”

The Prophet ﷺ instructed him to join his wife in Hajj.

In recent times, Saudi Arabia have permitted women who are 45 years old or above to perform Hajj without a mahram as long as they are travelling with an organised group and submit a NOC (No Objection Certificate) from their mahram.

A woman should always seek a scholar’s advice regarding her personal circumstances.

Men and women are required to enter the state of ihram for Umrah; however, where men must wear the garment of ihram (consisting of two pieces, the izar and rida), there is no such requirement for women in ihram. Women’s dress code should be simple, modest and not reveal her ‘awrah. Like men, females should not wear perfumes or fragrances, but for women this extends to jewellery and makeup too during Umrah.

It was also recorded that ‘Abdullah ibn ‘Umar narrated from the Prophet ﷺ:

“…The Muhrima (a woman in the state of ihram) should not cover her face, or wear gloves.” [2]

Can a woman perform Umrah while menstruating?

For many Muslims, Umrah may be a once in a lifetime pilgrimage which they may not have the chance to perform again. For women, menstruation plays a crucial role in planning for Umrah. Allah ordained menstruation especially for the daughters of Adam, which affects some of their acts of worship. Umrah is no exception. As such, women cannot perform Umrah while menstruating until they have become pure.

It would be advisable to plan your Umrah ahead to avoid these days of the month; however, if you are tested with this during the time you booked, seek solace in knowing that ‘A’isha radhiAllahu ‘anha, the Mother of the Believers, was tested in this way.

When ‘A’isha had set out with the Prophet ﷺ to perform Hajj, she got her menses. The Prophet ﷺ found our tearful mother and asked her:

“What is the matter with you? Have you got your menses?” [3]

When she responded yes, he informed her:

“This is a thing which Allah has ordained for the daughters of Adam. So do what all the pilgrims do with the exception of the Tawaf round the Ka’ba.”

Plan your Umrah accordingly, but put your trust in Allah.

May Allah accept your Umrah!

Nominate a loved one to go to Umrah for Free

Do you know someone who needs Umrah to heal from hardship and trauma? Nominate them today and give them the gift of a lifetime.