Anciently named the Bakkah city, Mecca today is officially known as Makkah Al-Mukarramah. The holy city for Muslims is located at a distance of 450.4 kilometers away from Madinah and 70 kilometres inland from Jeddah, at an elevation of 227 meters (909 feet) above the Red Sea in the dry sandy beds of Wadi Ibrahim. Since the birth of Prophet Muhammad (PBUH) – the Seal of Prophets – Makkah has been the religious centre (Qiblah) that Muslims turn to five times for their daily prayer. However, did you know that it’s a religious obligation for Muslims to visit Mecca once in their lifetime? Read on to know more facts about Mecca.

What is Mecca known for? 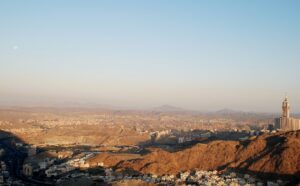 The ancient city of Mecca is called the spiritual centre of Islam for two primary reasons. Prophet Muhammad (PBUH) received the first revelation of the Quran in the 7th century and is it also where the Ka’bah is situated. According to religious scriptures, the first revelation was revealed on the outskirts of Makkah at the top of the Jabal al-Nur mountain.

Furthermore, Makkah is where Masjid al-Haram – the Great Mosque and the home to Ka’bah was built by Prophet Abraham (AS) and his son Prophet Ismail (AS) in c. 608 CE. The well of the holiest water to Muslims, “Zamzam,” is also situated in Mecca. Moreover, around 1.9 million Muslims face the Ka’bah every day for the ritual prayers; and every year, thousands of Muslim pilgrims visit Mecca to perform Umrah and Hajj. In short, the sacred city is renowned for its religious and historical significance throughout the world.

Hidden and unknown facts about Mecca you have never known

If you are a Muslim, you might believe that you know everything about Makkah. Listed below are ten interesting facts about Mecca that very few people know about the Holy City:

Can you Live in Mecca?

If you plan to reside in the Holy City, you must know the following facts about Mecca: The total population of Mecca is estimated to be around 2,078,766. There’s no such thing as nationality or living visa in Mecca. The residents of the Holy City are issued an iqama, meaning a temporary permit for residence, which has to be renewed annually. Moreover, because of its religious significance, the government of Mecca has enforced strict laws which restrict non-Muslims from entering the sacred city.

Although most people living in Mecca work in the Hajj industry, the city also has a well-functioning economic sector. The overall urban economy of Mecca is either based on service or commercial industry, which includes- textiles, utensils, and furniture. Because of its desert-like nature, fruits and vegetables are usually imported from the cities nearby. Mecca has neither rail transportation nor a railway station. The Jeddah airport and seaport serve the city well through intercity transportation services- taxi, bus, and truck. The houses of Makkah are more compacted within the old city areas than the modern residential areas.

The governor of Makkah has facilitated the boy and girls with free education for all from the primary to the university level. Also, the medical and health care services for the residents are adequate and free. Since the 21st century, the city of Mecca has undergone several structural improvements- the Masjid was enlarged, the area around Haram Sharif the sanctuary or holy shrines was cleared, modes of transportation were enhanced, and sanitation and housing were improved. In short, today, Mecca is a well-established city with limited but all necessary resources for a calm and peaceful life.

What Is Inside the Ka’bah (Black Box)?

Constructed from marble and grey stone, the cub-shaped Holy structure is around 50 feet high and 35 by 40 feet at the base. It is located inside Haram, the Great Mosque of Allah. An interesting fact about the door of the Kaaba is that it is made up of gold, whereas the interior of the Ka’bah encompasses three pillars to support the roof and beautifully hand-crafted gold and silver lamps. The walls and marble of the Ka’bah are engraved with Quranic verses. As per the Islamic ritual, the Ka’bah is covered with an enormous black-coloured cloth known as “Kiswah” during the entire year.

At the eastern corner of Ka’bah Hajr-e-Aswad, the sacred black stone from heaven is located. According to Islamic history and information, the stone was awarded to Prophet Adam (AS) to ask for forgiveness in the event of his expulsion from paradise. Today, the sacred stone is broken into pieces, and the ring of stones is held together by a weighted silver band. There is also a sacred landmark on the floor to highlight the exact spot where Prophet Muhammad (PBUH) used to pray.

Mecca is home to Masjid Al-Haram, the holiest and largest Masjid (Mosque) in the world. Once known as Bakkah, Ummul-Qura, and Al-Qaryah, the city holds religious significance for all Muslims. The Ka’bah, towards which all ritual prayers are directed, and the well of Zamzam are also situated in Mecca. Every year, Muslims from all over the world visit Mecca to perform their religious duties pertaining to Umrah and Hajj. It is believed that Mecca is protected by angels that will not let evil enter the sacred land.