What Is the Rukan Yamani? 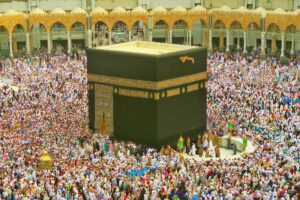 Rukan Yamani, also known as Rukn-al-Janubi and the Yemeni Corner, is located in the south-western corner of the Holy Ka’bah. It is parallel to Hajr-e-Aswad (the Black Stone), situated on the opposite end of the southern wall. The corner was given the name Rukan Yamani because it points towards the land of Yemen.

According to the hadith of Prophet Muhammad (PBUH), Rukan Yamani, like Hajr-e-Aswad, can absolve people’s sins. Since then, it has become a Sunnah to touch the corner and pray for forgiveness while performing Tawaf.

What Is its Significance in Islam? 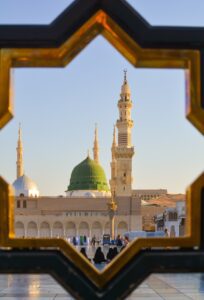 Did you know that Rukan Yamani is considered a living miracle in Islam? Over the years, several rulers have tried covering or sealing Rukan Yamani to hide its rupture. However, regardless of how much the rulers tried, they always failed. Therefore, in order to prevent the disintegration of the lower corner of Rukan Yamani, the rulers have used a special type of molten metal and concrete with long stainless- steel nails to keep it intact.

Rukan Yamani holds great importance in the Islamic history. Every year, thousands of pilgrims enter the Holy Ka’bah with the wish to perform the Sunnah of Istilam at Rukan Yamani. Prophet Muhammad (PBUH), on the blessings and honour of touching Rukan Yamani, said that, “Touching of the Black Stone and the Yemeni Corner indeed erases sins.” (Musnad Ahmad from Ibn’ Umar)

Muhammad Taahir Al-Kurdi Al-Makki, in his book titled “The Ancient History of Makkah and the Noble House of Allaah,” writes about the significance of the Stone situated at Rukan Yamani:

“The stone in the Yemeni Corner (al-Rukn al-Yamaani) goes back to the time when ‘Abd-Allaah ibn al-Zubayr (may Allaah be pleased with him), and that it has remained until our own times, and that everyone who has to maintain the Ka’bah kept this stone as it was. He says that during the time of Ottoman Sultan Murad IV, who maintain the Ka’bah, the edge of the stone of this Corner was broken off, and molten lead was poured in its place.” (Volume 3, Page 256)

What Corner of the Kaaba Is the Rukan Yamani?

The Rukan Yamani is in the south-western corner of the Holy Ka’bah, located in Makkah, Saudi Arabia. It can be found on the right side of Hajr-e-Aswad (the Black Stone). The Rukan Yamani points towards the direction of Yemen.

The act of Istilam refers to touching by hand or kissing Rukan Yamani – the sacred corner of the Holy Ka’bah. Due to the reason that Rukan Yamani is still standing on the same foundation built by Prophet Ibrahim (AS), according to a narration by Abdullah bin Abbas (RA), it is believed that Prophet Muhammad (PBUH) made Istilaam on it. Therefore, even today, while performing Hajj or Umrah, it is a Sunnah to perform Istilam – touching or kissing the Holy Corner. However, there is no harm if a pilgrim cannot touch or reach the Rukan Yamani due to the crowd inside the Ka’bah.

Duas to Read Between the Yemeni Corner and Hajr-e-Aswad

Whenever Prophet Muhammad (PBUH) used to pass or walk between the Hajar al-Aswad and Rukan Yamani, he (SAW) used to recite the following dua:

Since then, it has been considered a religious practice to recite the aforementioned dua while performing Istilam on Rukan Yamani.

Names of Each Corner of the Kaaba

The Holy Ka’bah being a cube-shaped structure, comprises four corners. This means that apart from the famous Rukan Yamani, the remaining three corners of the Holy Ka’bah – Rukan Iraqi, Rukan Shami, and Rukan Al Aswad – have their own significance in Islam. All the four corners roughly point towards the cardinal directions of the compass; north, west, south, and east. Moreover, except for Rukan Al Aswad, the names of all corners are given to them based on the country they point towards.

Rukan Iraqi slightly points in the north-eastern direction from the centre of the Holy Ka’bah. It is also called the Iraqi Corner because it faces the land of Iraq.

Rukan Shami, also known as the Levantine Corner, points towards the north-western direction from the centre of the Holy Ka’bah. The corner was named Rukan Shami because it points towards Syria.

The corner of the Holy Ka’bah that faces Yemen is called Rukan Yamani (The Yemeni Corner). It is the only corner of the Ka’bah that isn’t covered with the Kiswa. Perfoming Istilaam at Rukan Yamani is considered a Sunnah. Therefore, while performing Hajj or Umrah, Muslims intend to perform the Istilaam upon the completion of Tawaf (circumambulation).