Located at the bottom right-hand side of the door of the Holy Kaaba in Makkah Masjid Al-Haram, Musallah Jibreel marks the spot where Jibreel (AS) taught Prophet Muhammad (PBUH) the way to offer the five daily prayers that were made compulsory during the event of Miraj. The area of Musallah Jibreel is marked with brown sticks on a white tile. Read on to learn more about Musallah Jibreel.

What Is Musallah Jibreel? 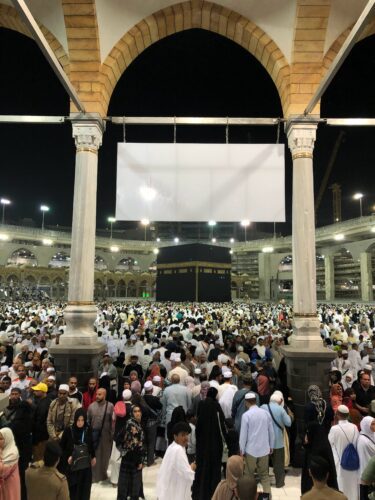 Also known as Mujjan, Musallah Jibreel is the place where the Holy Angel Jibreel (AS) guided Prophet Muhammad (PBUH) on how to offer the five compulsory (Farz) congregational prayers (salah). The Musallah Jibreel is marked by a pit hole marble tile with beautiful pieces of Mary Stone. It is located on the bottom right side near the door of the Holy Kaaba.

According to Islamic history, after Miraj, Angel Jibreel (AS) came and stood near the door of the Holy Kaaba ten times in two days, offering every salah (prayer) twice. In the first five days, angel Jibreel (AS) came at the starting time of each salah, while on the remaining days, he came at the ending time of each salah. This was done in order to teach Prophet Muhammad (PBUH) and his companions the method of prayer as well as to set the duration of all five salah.

Jibreel (AS) Taught the Prophet Muhammad (SAW) to Pray

Then turning to me, he said: Muhammad, this is the time observed by the prophets before you, and the time is anywhere between two times.” [Sunan Abu Dawud]

What Is Bab ul Fatah (Door of victory)?

Bab ul Fatah or the Door of Victory is the gateway of the Holy Kaaba from where Prophet Muhammad (PBUH) entered on 20th Ramadan 8 AH, during the conquest of Makkah. After performing the Tawaf and drinking water from the well of Zamzam, Prophet Muhammad (PBUH) stood at Bab ul Fatah and held its frame; he spoke out to the people of Makkah: “Men of the Quraysh! What do you think I will do to you?” They said, “We hope for the best.

What Is Written on the Door of the Kaaba?

The top of the door of the Holy Kaaba bears the inscription, “Allah Jal Jalaalah Muhammad Sallallaahu Alaihi Wasallam”. However, beneath this, the following verses of the Holy Quran are engraved:

“In the name of Allah, the Most Compassionate, the Most Merciful. Enter with peace and safety” (Surah Hijr: 46)

“Allah has made the Ka’bah the sacred house, as well as the sacred months a means by which (the physical and spiritual safety and well-being of) mankind is maintained.” (Surah Maa’idah: 97)

Say, “O my Rabb! Allow me to enter a pleasant place, allow me to leave pleasantly and grant me such authority from yourself that is coupled with (Your) assistance.” (Surah Israa: 80)

“Your Rabb has made mercy (towards you) compulsory upon himself.” (Surah An’aam: 5)

Your Rabb says, “Supplicate to Me and I shall respond.” (Surah Mu’min: 60)

Under all of this the following verse in inscribed:

Say, “O MY bondsmen who have wronged their souls (by committing kufr or other sins)! Never lose hope of Allah’s mercy.” (Surah Zumar: 53)

On 27th of Rajab in the year Aam ul-Huzn (sad year) after the death of Hazrat Khadijah (RA) and Abu Talib (RA), Prophet Muhammad (PBUH) was sad. That is when the renowned Islamic event of Isra and Miraj took place. Describing the first part of the night, Isra refers to when Angel Jibreel (AS) came to Prophet Muhammad (PBUH) and rode on Buraq – a magnificent white animal bigger than a donkey and smaller than a mule – all the way to Masjid Al-Aqsa.

Though generally the distance between both points is 1239.4 kms and it would take a person 1 hour and 52 minutes to travel between Masjid Al Haram and Masjid Al-Aqsa by airplane, it took Prophet Muhammad (PBUH) only a few seconds. Upon arriving at Palestine, Masjid al-Aqsa, Prophet Muhammad (PBUH) led the prayer of all Prophets (PBUT), after which his journey to the seven skies and meeting Allah (SWT) began.

Comprising 8 pieces of the Mary Stone marble, Musallah Jibreel is located in the bottom right-hand near the door of the Holy Kaaba. The square-shaped piece of brown sticks over white tiles marks the spot from where Angel Jibreel (AS) taught Prophet Muhammad (PBUH) the way to perform salah (prayer).