Mount Uhud – One of the most important mountains in Islam

Located in the north of Madinah, Saudi Arabia, Mount Uhud is 7.5 kilometres wide and 3,533 ft. (1,077 metres) high. Mount Uhud is the place where the second most important battle between the non-believers of Makkah and the Muslims (Muhajireen and Ansar) of Madinah took place. It was fought on 19th March, 625 CE (3 AH). The initial victory of the battle turned to defeat for the Muslims when some fighters left their positions after mistakenly believing that the battle was over. Read on to learn more about Mount Uhud and the significance of this mountain in Islam.

What Is Mount Uhud and What Is Its Significance in Islam? 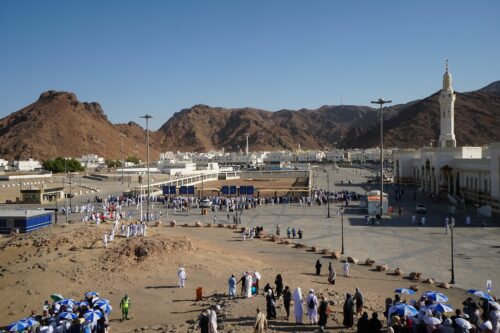 Previously known as Anqad, Mount Uhud overlooks the city of Madinah, Saudi Arabia. Known as one of the largest mountains, Mount Uhud boasts great prophesies of Prophet Muhammad (PBUH), who climbed on the mount along with his beloved companions. The mountain witnessed the great Battle of Uhud that took place during the 3 AH (19th March, 625 CE) between the Quraysh of Makkah and the Muslims (Muhajireen and Ansar) of Medina.

Mount Uhud contains graves of 70 beloved companions who were martyred during the Battle of Uhud, including Musab bin Omair and Hamza bin Abdul Muttalib. The southern ranges of Mount Uhud witnessed the heroism, sacrifice, and steadfastness of the beloved Muslim companions—a significant landmark in Islamic history.

Mount Uhud, because of its historical importance, is mentioned in several hadiths. Anas bin Malik in one place, narrated that Prophet Muhammad (PBUH), after the Battle of Uhud between the Quraysh and Muslims, said, “This is a mountain that loves us and is loved by us. O, Allah! Abraham made Mecca a sanctuary, and I make (the area) in between these two mountains (of Medina) a sanctuary.”

According to several narrations, it is stated that, “God’s Noble Messenger (PBUH) climbed Mount Uhud together with Abu Bakr al-Siddiq, ‘Umar al-Faruq, and ‘Uthman Dhi’n-Nurayn. Either due to their beautiful presence or out of its own joy and happiness, the mountain began to tremble and stir, to which Prophet Muhammad (PBUH) said: “Stand still Uhud, there is a Prophet, an honest man, and two martyrs.” (Sahih Al-Bukhari) It is believed that the trembling of Mount Uhud at that time predicted the future that Hazrat Umar (RA) and Hazrat Usman (RA) were going to be martyred.

What Happened on Mount Uhud?

Mount Uhud is where the second most significant battle, known as the Battle of Uhud, took place between an army of 3000 non-believers and 700 Muslims. Prior to the war, Prophet Muhammad (PBUH) commanded Abdullah bin Jubair (RA) along with 50 archers to stay at the top of the mountain to prevent the enemies from entering from the other side. Even though it was a strategic move, the already victorious Muslims in the Battle of Badr got overconfident after seeing that they were winning, which resulted in the archers leaving their stations.

Little did they know that the caravan under Khalid bin Waleed had eyes on the deserted site on the mountain, and so they attacked the Muslims from behind, killing several Muslim warriors in the process. This was when the Muslims were overtaken by disorder and panic as the non-believers surrounded them from all sides. Witnessing his companions falling, Prophet Muhammad (PBUH) ordered them to retreat.

Mount Uhud tells us the tale of how a simple act of disobedience of the order of the Prophet (PBUH) resulted in changing the outcome of the battle entirely, which the Muslims were initially close to winning. However, despite everything, Allah SWT helped His beloved Prophet Muhammad (PBUH) and his companions to be safely pulled back from the edge of disaster.

What Does Mount Uhud Mean?

Did you know that there are three different stories behind how Mount Uhud got its name? Uhud is an Arabic term that literally means “The One,” referring to the oneness of Allah SWT. In another place, it is said that Mount Uhud got its name as a testament to its unique attributes compared to all other mountains and because it is separated from all other mountains. Lastly, it is believed that a giant man named “Uhud” lived on the mountain because of which people started calling it Mount Uhud.

Where Is Mount Uhud Located? 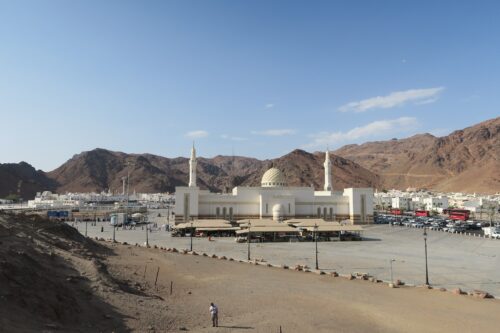 Mount Uhud is situated in the northern region of Madinah, Saudi Arabia, at an approximate distance of 5 kilometres from Masjid-e-Nabawi (the Mosque of Prophet Muhammad (PBUH)). Ghar Uhud is one of the most popular spots on this mountain. It is said to be where Prophet Muhammad (PBUH) sought refuge after suffering defeat in the Battle of Uhud.

Another popular place near Mount Uhud is the Al-Fasah Masjid, where Prophet Muhammad (PBUH) prayed Salah. The Martyrs’ Cemetery at Mount Uhud features 70 graves of the companions (peace be upon them all) that the Quraysh martyred during the Battle of Uhud.

Mount Uhud has several distinguishing features, the most unique of which are the volcanic rocks that include dark green, black and red granite, light gray Dacite, and red-pink Rhyolite. Mount Uhud has a unique landscape featuring “Maharis”- natural cavities that capture rainwater throughout the year, along with reefs and valleys. It also comprises numerous caves of minerals such as iron and copper, and features plateaus.

Mount Uhud is surrounded by several other plants, mountains, and trees such as Acacia Ehrenbergiana, Acacia Tortilis, Echinops Spinosissimus, Matrimony Vine, Luz Al-Nabi (a small plant with broad leaves), and Sidr. The historical monuments built on Mount Uhud include rock engravings and imposing castles that date back centuries. There are also acidic plants that are characterized by the sour taste of their pink leaves.

According to Tariq Aba el-Khail, an official Saudi Geological Authority, Mount Uhud is one of the most significant Islamic landmarks in Medina; it is 1077 meters above sea level. Dr. Wadi’e Qashqari, the director of the Department of Geological Survey of the Saudi Geological Authority, states that the rocks found on Mount Uhud have the highest hardness level and that they hardly deform. The less cohesive fields and less deformed rocks are formed around the premises of Mount Uhud due to the effect of hot water solutions.

Also known as the Archers’ Hill, Mount Uhud is a huge rocky mountain that the archers climbed during the Battle of Uhud at the command of Prophet Muhammad (PBUH) in order to prevent the fierce Quraysh army from attacking them. Today, visitors from all over the world enjoy climbing on top of Mount Uhud to view the battlefield and pay tribute to the sacrifice and heroism of the companions (peace be upon them).

After the humiliating defeat of the Quraysh in the Battle of Badr, the Quraysh started preparing for revenge. They assembled an army comprising 3000 soldiers, 200 horses, and 300 camels. The Quraysh army was led by Abu Sufyan, his wife Hind who commanded the women sections, and non-believers who were commanded by Khalid bin Waleed and Amr ibn al-As. On the other hand, the Muslim army was led by Prophet Muhammad (PBUH). Even though the Muslim army was heavily outnumbered, they gained an early advantage in the initial phase of the war.

However, when the battle looked like as though the Muslims were one step away from victory, 40 of the 50 archers left their designated spots from the top of Mount Uhud. This overconfidence skewed the results of the battle as the renowned war veteran Khalid bin Waleed surprised the Muslims by attacking them from behind, resulting in chaos. Many Muslims were killed during the Battle of Uhud; this included Prophet Muhammad’s (PBUH) foster brother and uncle.

Madinah is home to several historical monuments that have witnessed some great events during Prophet Muhammad’s (PBUH) lifetime. One such important location is the famous Mount Uhud. It is the site of the second biggest battle in Islamic history and holds a special place in the hearts of Muslims worldwide.