Hijr Ismail/ Hateem – What is the Hateem?

Hijr Ismail, also known as Hateem or Stone of Ismail, is a three-meter wide area adjacent to the north-western wall of the Holy Ka’bah.

Read on to learn more about the significance of Hijr Ismail in Islam.

What Is Hijr Ismail?

Therefore, even today, during Tawaf, Muslims are not allowed to enter or walk inside the space between the wall of the Ka’bah and Hateem. It was given the name Hijr Ismail – Stone of Ismail – as it was where Prophet Ibrahim (AS) built a shelter for his son Prophet Ismail (AS) and wife Hajrah (AS).

The History of Hijr Ismail

Hijr Ismail holds significant value in Islam. It was initially constructed by Prophet Ibrahim (AS) and later by the Quraysh during the reconstruction of the Holy Ka’bah. According to Islamic history, it is believed that when Prophet Ibrahim (AS), his son Prophet Ismail (AS) and his wife Hajra (AS) arrived in Makkah, Saudi Arabia they had no shelter over their heads.

That’s when Allah Almighty ordered Hazrat Jibrael (AS) to guide the family to the exact place where the current Hijr Ismail is located. On arriving at the barren land, Prophet Ibrahim (AS) used the branches of nearby trees to create a shelter for his wife and son. Therefore, it was given the name “Bayt Ismail” meaning “House of Ismail.”

Several Islamic sources claim that after Hajra (AS) passed away, she was buried in the area of Hateem. Later onwards, Prophet Ismail (AS) constructed a fence around his mother’s grave to prevent people from stepping on it. However, it is also believed that the grave of Prophet Ismail (AS) is also situated in Hijr Ismail.

The story behind the construction of Hijr Ismail doesn’t end here; it was rebuilt again during the era of the Quraysh. This was when Prophet Muhammad (PBUH) was 35 years old, and the Holy Ka’bah had faced severe damages due to a flood.

While the Quraysh were finalizing the construction of the Ka’bah, due to a financial crunch, they were not able to connect the Hijr Ismail to the wall of the Ka’bah. Hence, the people of the Quraysh decided to build a small wall at the northwest side of the Holy Ka’bah around the foundation laid by Prophet Ibrahim (AS).

Muhammad (PBUH) was questioned by Hazrat Aisha (RA) about the reason behind Hijr Ismail not being connected to the walls of the Ka’bah, to which he (SAW) replied, “Because your people (the Quraysh) did not have sufficient funds.” [Bukhari]

Since then, the wall has been recognized as Hijr Ismail.

Photo of the Hijr Ismail 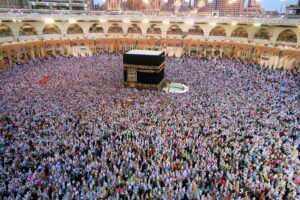 Importance of Hateem in Kaaba

“When I expressed the wish to perform salah within the Ka’bah, the Prophet (ﷺ) took me by the hand and led me into the Hijr (Hateem) where he (SAW) said, ‘Perform salah here if you wish to enter the Kaaba because this is part of the Baitullah.”

Moreover, it must be noted that only the three-meter-wide area that is adjacent to the wall of the Holy Kaaba on the side of Hijr Ismail is considered an actual part of the Ka’bah. However, in all cases, Muslims must perform Tawaf outside the complete area of Hijr Ismail.

While performing Hajj or Umrah, thousands of Pilgrims offer two Rakat of Nafl within the sacred area.

One of the several narrations of the Prophet Muhammad (PBUH) that prove that Hateem is indeed the part of the Holy Kaaba is as follows:

“O, Aisha! Had your people not very recently been in the Period of Ignorance, I would have had the Kaaba demolished and included the left-out portion within its walls. I would have also brought the inside of the Ka’bah to ground level and added two doors, with one on the eastern wall and the other on the western wall. In this manner, it would be according to the building and foundation of Prophet Ibrahim (AS).”

Facts about the Hijr Ismail

Listed below are some surprising facts about Hijr Ismail that highlight its importance in Islam:

Fact 1: The Grave of Prophet Ismail (AS)

During the reconstruction of the Ka’bah, the area of Hijr Ismail was left outside. According to some Islamic scholars, it was done because underneath the sacred area lies Prophet Ismail’s graves (AS) and his mother Hajra (AS).

Fact 2: The Dream of Abdul Muttalib

Prophet Muhammad (PBUH)’s grandfather Abdul Muttalib used to love sitting in the area of Hateem. One night while he was sleeping, he dreamt of a shadowy figure that directed him to the Zamzam well, hidden underground since the Jurhum tribe.

According to a narration of Hazrat Jabir Bin ‘Abdullah (RA), it was Hijr Ismail where Prophet Muhammad (PBUH) stood while he narrated the event of Miraj to the people of Quraysh. Prophet Muhammad (PBUH) said, “When the people of Quraysh did not believe me (i.e. the story of my Night Journey), I stood upon the Hijr Ismail or Hateem and Allah displayed Jerusalem in front of me, and I began describing it to them while I was looking at it.” (Sahih al-Bukhari 3886)

Meezab-e-Rahmah is a channel of water that starts from the roof of the Holy Kaaba and ends at the Hateem area. It is also known as the water outlet of mercy.