Door of the Kaaba – Everything you need to know

Located in the heart of Islam’s most important mosque, Masjid Al Haram, the Kaaba is believed to be the holiest site for all Muslims worldwide. Being the Qibla (the direction that Muslims face during Salah) and the House of Allah SWT, the Holy Kaaba holds great importance in the lives of the believers of Islam. 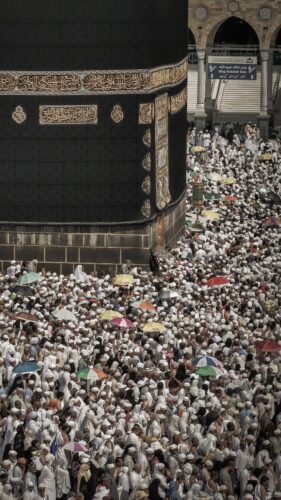 According to Islamic history, the Holy Kaaba was built 5000 years ago by Prophet Ibrahim (AS) and his son, Prophet Ismail (AS). The initial structure of Bayt Allah only consisted of four walls and had no roof or doors except for an opening in the eastern wall through which to enter and exit the sacred space.

However, long before the birth of Prophet Muhammad (PBUH), King Tubba became the first person to construct the door of the Kaaba from wooden planks. Since then, the Holy Kaaba’s door has gone through a series of reconstructions and renovations. Keep reading to learn more about the door of the Kaaba.

What Is the Door of the Kaaba Called?

The door of the Holy Kaaba is called Bab ar-Rahmah, meaning the “Door of Mercy.” It functions as a gateway, granting access to the House of Allah SWT. Throughout the history of Islam, the responsibility and great honor of looking after the door of the Kaaba has been bestowed upon several leaders in the Muslim world. Today, the key to the door of the Kaaba is in the custody of the Al Shaiba family.

Name of the Kaaba’s Door in Arabic

The Arabic name of the door of the Holy Kabah is Bab ar-Rahmah which means the “Door of Mercy.” It is the only way inside the House of Allah SWT. Access to the door of the Kaaba is only granted to esteemed religious personalities.

Where Is the Door of the Kaaba Located?

The door of the Kaaba is located on the north-eastern wall of the Holy Kaaba in Makkah, Saudi Arabia. It is also called Bab ar-Rahman, which literally means the “Door of Mercy.”

When Was the Door to the Kaaba First Installed?

This leaves us with the question, “When was the first-ever door to the Holy Kaaba installed?” According to Islamic history, the first door of the Kaaba was built and installed by King Tubba in the late 4th century. Being the ruler of Yemen, King Tubba had converted to Judaism at the time.

The first door of the Holy Kaaba was constructed from wood and wasn’t replaced until the early Islamic era. Al-Arzaqi, in his book Kitab Akhbar, writes that he heard Ibn Jarir al-Tabari saying, “It was claimed that Tubba was the first to cover al-Kaaba and that he instructed the leaders of the Jurhum tribe to maintain its purgation and make a door and a key for it.”

What Is Written on the Door of the Kaaba?

The golden door of the Kabah is inscribed with verses from the Holy Quran. The top of each door is engraved with the following verse “Allah Jal Jalaalah Muhammad Sallallaahu Alaihi Wasallam”. However, as you move down, you will find the following Quranic verses, carved in the same order:

“In the name of Allah, the Most Compassionate, the Most Merciful. Enter with peace and safety” (Surah Hijr: 46)

“Allah has made the Kaaba the sacred house, as well as the sacred months a means by which (the physical and spiritual safety and well-being of) mankind is maintained.” (Surah Maa’idah: 97)

“Say, “O my Rabb! Allow me to enter a pleasant place, allow me to leave pleasantly, and grant me such authority from Yourself that is coupled with (Your) assistance.” (Surah Israa: 80)

“Your Rabb has made mercy (towards you) compulsory upon himself.” (Surah An’aam: 5)

“Say, “O My bondsmen who have wronged their souls (by committing kufr or other sins)! Never lose hope of Allah’s mercy.” (Surah Zumar: 53)

Why Is the Kaaba Door So High?

Situated in the deep valley of Farhan, the Holy Kaaba was flooded most of the year. Therefore, when the Quraysh decided to renovate the Holy Kaaba, the first thing that they did was that they sealed the opening of the western door Kabah and raised the eastern door high above ground. This was done in order to protect the Holy Kaaba from floodwater and intruders.

Aisha (RA) asked Prophet Muhammad (PBUH) the reason that the Quraysh had for raising the door of the House of Allah SWT. Prophet Muhammad (PBUH) replied, “Your people did it so that they could permit into the Kaaba, only those people whom they approved of and could prevent those whom they pleased. Had your people not been recently removed from ignorance and had I not feared that they would be averse to change, I would have included the Hateem within the Kaaba and brought the door level with the ground.”

Currently, the door of the Holy Kaaba rises 7 ft (2 metres and 13 centimetres) above the ground of Masjid Al Haram (The Grand Mosque of Makkah, Saudi Arabia). Moreover, the thickness of the door of the Kaaba, which includes the breadth and height, is 222 centimetres wide and 171 centimetres long.

Is Kaaba’s Door Made of Gold?

The current door of the Kaaba was constructed by a renowned jeweller, Ahmed bin Ibrahim Badr, during the reign of King Khalid bin Abdul Aziz. It is said that approximately 280 kg of 99.99% authentic gold is used to make the Bab ar-Rahmah (the door of the Holy Kaaba). Excluding the gold, the total worth of the door of the Kaaba is around 13 million 420 thousand Saudi riyals.

How Many Doors Does the Kaaba Have?

Even though we only see one door today, a storm that hit during Hajj in 2018 revealed that Holy Kaaba used to have two doors. It is said that the second door was built by Abdullah bin Zubair (RA) on the directives of Aisha (RA). She said that it was the sincere wish of the Messenger (PBUH) of Allah SWT to build two doors at the Holy Kaaba so that people could enter from one side and exit from the other one.

However, in 75 Hijri, after Banu Ummaiyah conquered the city of Makkah under the leadership of Hajjaj bin Yousuf, the first thing that they did was to reconstruct the Holy Kaaba in the shape we see in the present day. Hajjaj bin Yousuf ordered his craftsman to seal the second door of the Kaaba, which is also called the “Hidden Door.”

Who Built the Kaaba?

According to Islamic tradition, the Holy Kabah is believed to have been constructed under the command of Allah SWT by Prophet Ibrahim (AS) and his son Prophet Ismail (AS). It is said that back then, the Holy Kaaba had no roof or doors. The structure of the House of Allah SWT only comprised walls and an opening at the eastern wall, which served as an entrance and exit doorway.

Summary – Door of the Kaaba

Ever since its creation, the door of the Kaaba has been hailed as one of the most significant Islamic structures. From being made out of wood, to steel, silver, and gold, the Kaaba door has gone through some major changes throughout history. Today, Bab ar-Rahmah is made of pure gold and is inscribed with verses from the Holy Quran.