Difference between Hajj and Umrah

Hajj and Umrah are sacred pilgrimages that Muslims from around the world undertake once or even multiple times in their lifetime. They travel to Makkah and Madinah for these religious journeys. Although both are sacred and have similar benefits, there a few core differences that set Hajj and Umrah apart. Keep reading to learn about the difference between Hajj and Umrah.

As the most significant religious duty, Hajj and Umrah have similar rituals and blessings. It is said in the Holy Quran:

However, before you decide which journey to embark upon, it is important to know how the two differ. This will help you determine which one to prioritize. Let’s explain the main difference between Hajj and Umrah. 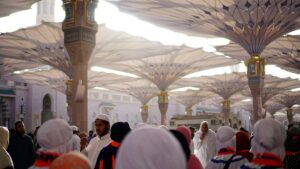 Hajj is a mandatory obligation since it is one of the five pillars of Islam. Every Muslim who is physically, mentally, and financially capable of performing Hajj must complete it at least once in their life. For this reason, Hajj is considered the major pilgrimage.

Umrah is considered as the minor pilgrimage. It is not obligatory for Muslims to perform, but it brings equal blessings to that of Hajj. Umrah is a Sunnah, full of rewards, and with many similarities to Hajj in terms of rituals. Umrah is not as costly as Hajj and millions of Muslims perform it every year.

Hajj has a Specific Time

Umrah has no fixed time or schedule, so it can be performed at any point in the year. It is usually not performed at the time of Hajj, unless the pilgrim is performing Hajj ul-Qiran. Many Muslims prefer performing Umrah during the month of Ramadan to maximise their blessings.

Hajj and Umrah Have Different Rituals

Hajj has more rituals, which include the travel of Mina, supplication at the Plain of Arafat, stoning Shaitain, the stay in Muzdalifah, and the animal sacrifice or Qurbani.

Umrah is Performed in One Place

The rituals in Umrah are to be performed only at the Holy Kabah, meaning that pilgrims do not have to travel to different locations. They can complete Umrah in one place.

Hajj on the other hand, requires pilgrims to visit different venues such as Arafat and Muzdalifah. They must travel to these places to complete their Hajj.

Umrah is Shorter Than Hajj

Hajj has more rituals and requires more travelling than Umrah. Thus, it takes longer too. The practices and prayers of Hajj can be completed in 3 to 4 days.

Umrah can take one day to perform or a whole week depending on the package you get. In some cases, pilgrims can complete their religious practices for Umrah within a few hours. This makes it more convenient for people who don’t have the resources of the time to perform a long pilgrimage.

Types of Hajj and Umrah

Hajj ul Qiran is a combination of Hajj and Umrah, where the pilgrim wears the Ihram with the intention of accomplishing both. The person who completes this type of Hajj is known as a Qarin. Animal sacrifice is not obligatory in Hajj ul-Qiran.

Hajj ul Ifrad is the simplest type of Hajj, where the pilgrim wears the Ihram with the intention of only performing Hajj and not Umrah. They will not perform Umrah during the month of Hajj. The person who completes this type of Hajj is called a Mufrid. Hajj ul Ifrad requires the pilgrim to sacrifice an animal to complete it.

Hajj al-Tamattu is a type of Hajj where the pilgrim wears the Ihram with the intention of  only performing Umrah, but during the month of Hajj. They perform Tawaf, Saa’ee, and Qasr for Umrah and on the 8th day of Dhul-Hijjah, they put on the Ihram for Hajj. They then carry out all the duties and rituals of Hajj. A person who performs Hajj al-Tamattu is known as a Mutamatti.

A believer has the option of change their niyyah for Hajj ul-Qiran or Ifraad to Tamattu, since this is the most recommended type of Hajj.

Similarities Between Hajj and Umrah?

Now that we have discussed how Hajj and Umrah differ, it is worthwhile to mention how the two are similar.

Is Hajj and Umrah Equal?

Although Hajj and Umrah are both spiritual journeys that enhance your faith and bring you closer to Allah, they are not equal. Hajj is a pillar of Islam, which makes it an obligation for all Muslims. It is a requirement or qualification for completing their religion.

Whereas, Umrah is a choice and a Sunnah. Umrah enhances your faith and brings unlimited blessings, but it is not a requirement of Islam. In terms of spiritual weightage, Hajj holds more value since is renews the Muslim as if they were born again.

Hajj and Umrah packages are also different, with Umrah giving Muslims the option of performing it at any time during the year. In either case, performing prayer or supplication at the Holy Kabah has great importance and rewards. As Abu Huraira narrated:

Nominate someone to Umrah

Due to the expenses and sacrifices that come with going for Umrah or Hajj, many people are forced to delay it until they reach a more stable point in their lives. Both pilgrimages require you to make the journey to another country, which not everyone can afford. It says in the Holy Quran:

“Pilgrimage to the House is a duty towards God upon humankind, for those who can find a way there.”

As a Muslim it is our duty to help other believers perform the sacred act of pilgrimage. For this reason, we have started an Umrah Fund to help people who have faced immense hardship complete their wishes to perform Umrah. Click here to nominate someone for Umrah.