Masjid Quba is the first mosque (masjid) in Islamic history. It was constructed in 622 CE, almost a year after the migration to Madinah, Saudi Arabia. Although the foundation of the Quba Mosque was laid by Prophet Muhammad (PBUH), it was later completed by his companions, making it the oldest and second-largest mosque to date. 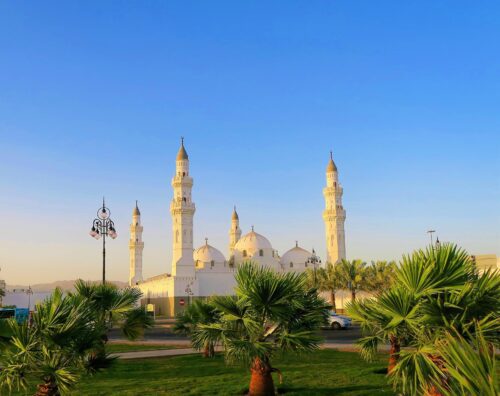 It is said that Prophet Muhammad (PBUH) had spent 14 nights at the site of Masjid Quba praying Qasr prayers while waiting for Ali (RA) – who had stayed in Makkah to safeguard Prophet Muhammad’s (PBUH) life and help him escape.

The Quba Mosque was constructed outside the boundaries of Madinah, at a distance of almost six kilometres from a small village named Quba. Keep reading to learn more about Masjid Quba and its significance in Islam.

What Is Masjid Quba?

Masjid Quba is built on the spot where Prophet Muhammad (PBUH) and Abu Bakr (RA) first stayed after migrating from Makkah to Madinah. The Prophet (PBUH) and his beloved companion arrived in Madinah on the 12th Rabi ul-Awwal, which was a Monday. Masjid Quba’s history can be traced back to the seventh century, making it one of the world’s oldest mosques. Prophet Muhammad (PBUH) himself laid down the initial stones for the creation of Masjid Quba.

Even though Masjid Quba witnesses an influx of visitors and worshippers every year, the number drastically increases in the holy month of Ramadan. According to an Islamic tradition, performing wudu (ablution) and praying two Rakats in Masjid Quba is equal to performing one Umrah. The mosque is also a landmark, the site where the first Friday prayer was held.

Where Is Masjid Quba Located?

Masjid Quba is outside the city of Madinah, approximately six kilometres from the village of Quba in Saudi Arabia. However, several years later, after the expansion of Madinah, Masjid Quba became an integral part and a popular place of ziyarat and worship inside the boundaries of the sacred city of Prophet Muhammad (PBUH).

According to Islamic history, it is said that Masjid Quba was the place where Prophet Muhammad (PBUH) stayed and performed Salah (prayer) on the first night after arriving in Madinah. Later, Allah’s SWT Messenger (PBUH) constructed the Quba Mosque on that exact spot.

The History of Masjid Quba

Like every other religion, Islam also has a history dotted with battles and victories that inspire millions of Muslims worldwide. In the 7th century, due to the increase in the number and severity of persecutions by the Quraysh, Prophet Muhammad (PBUH), on the command of Allah SWT, decided to migrate to Madinah (previously known as Yathrib).

As this news reached the believers of The Enlightened City, the believers started counting the days in awaiting the beloved Prophet (PBUH). Every day, these people would go to the fields and wait under the shade of the palm trees in hopes to catch a glimpse of Prophet Muhammad (PBUH). Until one day, a Jew, after seeing a small caravan of white-robed travellers, shouted, “O people of Arabia! What you have been waiting for has arrived!”

On hearing the news, the Muslims rushed to welcome Prophet Muhammad (PBUH) and Abu Bakr (RA). The beloved Prophet (PBUH) then turned to the right and started walking towards Quba – a small village located outside Madinah. Prophet Muhammad (PBUH), on reaching Banu Amr bin Auf’s house, got off his camel and went to meet those who were waiting for him there.

He then addressed the Muslims of Makkah and Madinah collectively and said, “O People, give unto one another greetings of peace; feed the people; strengthen the ties of kinship, pray in the hours when others are asleep. Even so, shall ye enter paradise in peace.”

Prophet Muhammad (PBUH) had spent almost 14 days after the migration in Kulsoom bin Hatam’s (RA) home, where he later laid the foundation of Masjid Quba. In other narrations, it is also said that Prophet Muhammad’s (PBUH) female camel knelt to drink water from a well in this area. Even before the migration, Prophet Muhammad (PBUH) had offered Friday prayers at Saad ibn Khaitamah’s (RA) house, which was located nearby, proving that the site of Masjid Quba is sacred and blessed.

Al-Tabarani quoted Al-Shimous Bint Al-Nauram, who said that he witnessed Prophet Muhammad (PBUH) and his companions carrying sand, rocks, and stones to the construction site. “I saw the Prophet (PBUH) when he constructed this mosque.

He used to carry stones and rocks on his back until it was bent. I also saw dust on his dress and belly. But when one of his companions would come to take the load off him, he would say no and ask the companion to go and carry a similar load instead.”

What Makes Masjid Quba So Special in Islam? 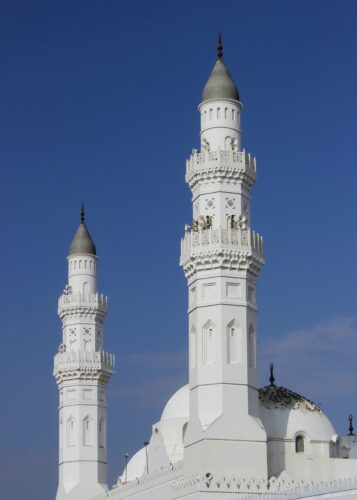 Being the second-largest mosque, Masjid Quba holds great significance in the hearts of millions of Muslims around the world. The holy mosque is said to provide blessings equivalent to an Umrah, as Prophet Muhammad (PBUH) said that whoever prays inside Masjid Quba, it would be as though they have performed one Umrah. Another reason why Masjid Quba is so special is that it was the first masjid to be built in Islamic history, and it is also the place where the first-ever congregational Friday prayer (Salah) was held.

Ever since its construction, Masjid Quba has only been completely renovated once, followed by minor structural additions and upgrades throughout the years. Masjid Quba‘s most recent renovation was completed in 1896.

This included adding a rectangular prayer hall on the second floor, which is connected to shops, offices, and libraries. Currently, Masjid Quba has 56 mini domes, 4 parallel minarets, 12 minor entrances, 7 main entrances, 3 central cooling units, and all necessary state-of-the-art facilities. The minbar is made from white marble, whereas the courtyard’s foundation comprises white, red, and black marbles.

All the minarets are placed on the Masjid’s octagonal shaft, creating a circular shape as you move upwards. When you move towards the main hall, you will see that 6 main domes surround the central courtyard. Masjid Quba also has a portico that is two bays deep. Partitioning the men’s and women’s prayer areas, the mosque’s border runs east to west. The great mosque can accommodate more than 20,000 worshippers.

Mentions of Masjid Quba in Hadiths

Prophet Muhammad (PBUH), on being asked about the significance of Masjid Quba, said, “He who purifies himself at his home and comes to Masjid Quba and offers two rakats therein, will be rewarded the reward of an Umrah (lesser pilgrimage).” [Sunan ibn Majah]

“Never stand (to pray) there (referring to a place of worship in which the hypocrites had used for harm and disbelief, as mentioned in the previous ayah). A place of worship which was founded upon duty (to Allah) from the first day is more worthy that thou should stand (to pray) therein, wherein are men who love to purify themselves. Allah loves the purifiers.” [Holy Quran 9:108]

In another instance, Al-Tabarani narrated that Al-Shimous Bint Al-Nauman said, “I saw the Prophet (PBUH) when he constructed this mosque. He used to carry stones and rocks on his back until it was bent. I also saw dust on his dress and belly. But when one of his companions would come to take the load off him, he would say no and ask the companion to go and carry a similar load instead.”

Narrated Ibn Umar: “The Prophet (PBUH) used to go to the Mosque of Quba (sometimes) walking and sometimes riding.” Added Nafi (in another narration), “He then would offer two Rakat (in the Mosque of Quba).” [Sahih Al-Bukhari]

Abdullah bin Dinar narrates that Ibn’ Umar (RA) said, “The Prophet (PBUH) used to go to the Mosque of Quba every Saturday (sometimes) walking and (sometimes) riding. He would then offer two Rakat.”

Masjid Quba has been relevant and important since its creation. Being the first-ever and the second largest mosque constructed, Masjid Quba has always been one of the most sacred places for prayer. The significance of Masjid Quba can be understood by the fact that everything from its creation to its evolution is mentioned abundantly and in crystal clear phrasing. So, if you plan to pay a visit to Madinah (the city of Prophet Muhammad (PBUH)) in Saudi Arabia, we recommend visiting the beautiful Masjid Quba to offer two Rakat prayers.