Also known as Jabal Al-Hira, the cave of Hira is a mountain that lies at a distance of almost two miles from the Holy Kaaba, near Makkah in Saudi Arabia. Near the top of this mountain is the small cave of Hira, which is a little more than 1.5 meters in width and a little less than 4 meters in length. According to Islamic history, it is believed that in the cave of Hira, Prophet Muhammad PBUH found the peace and solitude that he needed to meditate and reflect on his life and the world. Read on to learn more about the cave of Hira and its significance in Islam.

What Is the Cave of Hira? (Otherwise Known as Jabal Al-Hira) 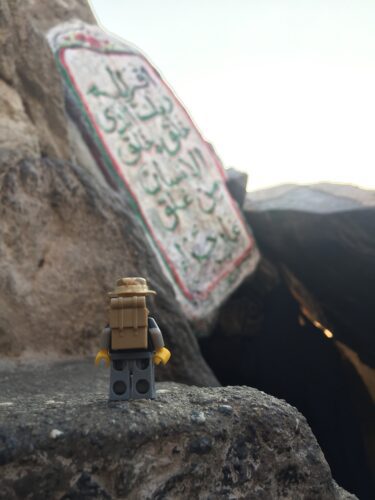 Located outside Makkah, in the Hejaz region of Saudi Arabia, the cave of Hira is situated at the top of the Jabal Al-Nour Mountain (which is also known as the “Mountain of Light” or the “Hill of Illumination”) at the height of 634 meters.

The cave of Hira is at a distance of 4 kilometres from the Holy Kaaba and oversees the Northern direction while its entrance point directly faces towards the House of Allah SWT.

It is the place where Prophet Muhammad PBUH was blessed with the first revelation of the Holy Quran. The cave of Hira is also known as Jabal Al-Hira.

It is one of the most visited places by pilgrims during the Islamic obligations of Hajj and Umrah. The followers of Prophet Muhammad PBUH climb to the top of the mountain and pray inside the cave of Hira to seek the blessings of Allah SWT.

The Story of Cave of Hira

The history of the cave of Hira goes back to the youth of Prophet Muhammad PBUH when he used to work as a tradesman, travelling all around to Palestine and Syria. The calm and peaceful nature of the cave of Hira gave him an opportunity to think quietly and meditate far from the busy streets of Saudi Arabia. And so, soon, Jabal Al-Hira became Prophet Muhammad’s PBUH ultimate retreat.

He (SAW) used to climb the Jabal Al-Nour Mountain quite often, seeking solitude. The Holy Prophet (SAW) would meditate inside the cave of Hira, withdrawing himself from the seclusions of the world and devoting himself to the true light consisting of long vigils and prayers.

It was during the month of Ramadan (610 CE) that one night when the 40years old, Prophet Muhammad PBUH was in deep meditation in the cave of Hira, somewhere around the Tahajjaud time, Angel Jibreel (AS) in the form of a human visited him with a piece of silk brocade in his hand.

Angel Jibreel (AS), then on Allah SWT’s command, released the following revelation: “Read in the name of your Lord, the Creator. He Who created man from a clot. Read! And your Lord is the Most Bounteous. Who taught by the Pen, taught man what he knew not.” [Surah Al Alaq, 96:1-5]

These were the first verses of the Holy Quran revealed to him. Prophet Muhammad PBUH then recited the words after Angel Jibreel (AS) and said, “It was as though the words were written on my heart.”

Prophet Muhammad PBUH turned pale and was trembling by the shock of the experience and feared that he had been possessed. While climbing down the cave of Hira, when he was in the midway of the mountain, Prophet Muhammad PBUH heard the voice of Angel Jibreel (AS) saying, “O Muhammad, you are the Messenger of God, and I am Jibreel.”

Why Did Prophet Muhammad PBUH Go to the Cave of Hira?

According to Islamic history, it is believed that in the early years of his adulthood, Prophet Muhammad PBUH used to have revelations in the form of good dreams which came true. He then began to like solitude and so started spending hours and days inside the cave of Hira meditating and seeking the true light.

Prophet Muhammad PBUH used to even take provisions with him to stay in the cave of Hira for an extended period and would only return to Hazrat Khadija (RA) to restock. The Prophet (SAW) of Islam continued the practice until the divine revelation was descendent upon him by Allah SWT through Angel Jibreel (AS).

The First Revelation of the Quran

Prophet Muhammad PBUH at the age of 40, had restored to spending a whole month in the cave of Hira, to find solitude, peace, and an opportunity to meditate and reflect. During those last ten days of Ramadan, Angel Jibreel (AS) appeared in front of Prophet Muhammad PBUH and, on Allah SWT’s command, asked him to recite the first verses of the Holy Quran.

Those verses of the divine revelation are as follows:

“Read in the name of your Lord, the Creator. He Who created man from a clot. Read! And your Lord is the Most Bounteous. Who taught by the Pen, taught man what he knew not.” [Surah Al Alaq, 96:1-5]

The complete Holy Quran was revealed over 22 years, 5 months, and 14 days.

What Is the Importance of the Cave of Hira in Islam?

Jabal Al-Nour holds great significance in the religion of Islam as it I claimed to be the place where Prophet Muhammad PBUH used to spend days meditating and seeking light and is said to have received with the first revelation of the Holy Quran by Angel Jibreel (AS). Allah SWT in the Holy Quran tells us that the first revelation descended on the “Night of Power” in the holy month of Ramadan.

“The month of Ramadan is the month in which the Quran was revealed.” [Holy Quran, 2:185]

“We have indeed revealed this message during the Night of Power.” [Holy Quran, 97:1]

However, even though the cave of Hira has an important place in the biography of Prophet Muhammad PBUH, it isn’t supposed to be considered as a holy site such as Masjid Al-Haram.

Although there is no obligation regarding going to the cave of Hira or praying inside, due to its rising views of the Masjid Al-Haram and Makkah, it is among the most preferred tourism (Ziyarat spots) of Makkah. Therefore, many pilgrims from all over the world do summit to the cave of Hira if they get a chance.

Inside the Cave of Hira

From Jabal Al-Nour Mountain’s narrow passage entry point, Jabal Al-Hira looks dark and congested; however, it has ample space on the inside. Cave of Hira’s passage is easy to cross for people having a lean physique, whereas it could be a bit of a challenge to cross the passage if you are heavier. Although the cave’s passage is completely covered with rocks, it does allow sufficient sunlight to pass through.

Once you successfully cross the narrow passage, the entrance of the cave of Hira will be visible. Take a few steps forward to enter the sacred space where Prophet Muhammad PBUH used to pray, sit, and descend upon the first revelation. The inside area of Jabal Al-Hira is much airy and cool than the path that leads to it, making it the perfect place to rest, pray and remember Allah SWT.

Facts about the Cave of Hira

Here are some facts about the cave of Hira that every Muslim should know. These are indeed very interesting facts and will enrich your Islamic knowledge.

Fact 1: Space in the Cave of Hira

The cave of Hira is a small cave that is established on the dimensions of 1.5 meters in width and 4 meters in length. Comprising a slop of 380 meters, forming the height of 500 meters, the mountain itself possesses a shape that resembles a camel’s hump. The cave of Hira covers a total area of about 5.2 square meters.

After the revelation of the first verses of the Holy Quran, as Prophet Muhammad PBUH climbed down the mountain halfway down, he heard Angel Jibreel’s (AS) voice saying, “O Muhammad, you are the Messenger of God, and I am Jibreel.”

Fact 3: Fatwa Regarding the Cave of Hira

Every year during Hajj, around 5,000 Muslims climb up to the cave of Hira every day. However, with the increasing number of people, several unfortunate accidents of pilgrims falling while climbing up the cave of Hira have taken place in recent years. In light of this, it was suggested to enclose the cave site and build stairs. The suggestion was rejected by The Scholars of the Standing Committee, who issued a Fatwa stating:

“Climbing up to this cave is not one of the rituals of Hajj or Sunnahs of Islam, rather it is an innovation and is one of the things that lead to shirk or associating others with Allah. Based on that, people should be prevented from climbing up to it; no stairs should be built, and it should not be made easier to climb up to it, in accordance with the words of the Prophet (Peace and Blessings of Allah Be Upon Him).”

The cave of Hira is located near the summit of the Jabal Al-Nour Mountian. It is where Prophet Muhammad PBUH received the first Quranic revelation. Every year, thousands of Muslims visit the cave of Hira to seek the blessings of Allah SWT.