Pillars of the Prophet (ﷺ)’s Mosque

History of Masjid an Nabawi

Over the past 1400 years, the masjid of the prophet (ﷺ) has expanded from its original size to cover roughly the size of the whole city of Madinah at the time of the prophet (ﷺ). Within the grounds and the mosque itself is a huge amount of history which can easily go unnoticed. Much of this history is located around various pillars, all with inscriptions made by the Ottomans, but given the calligraphic nature of the notices, it can be hard to decipher even for those acquainted with Arabic. 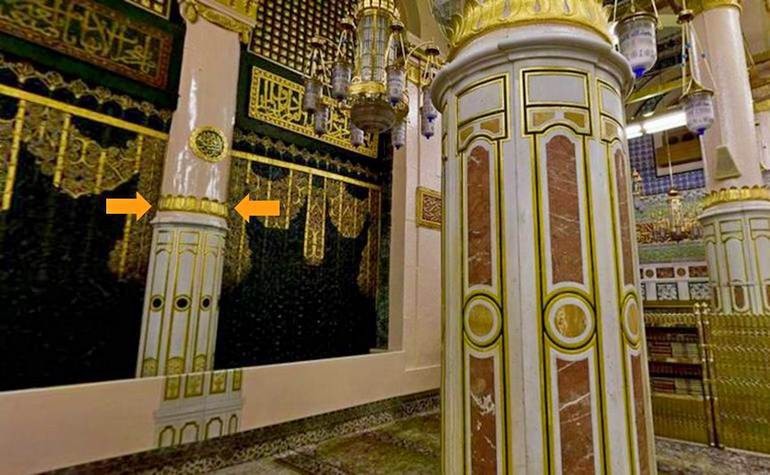 The boundaries of the old masjid at the time of the prophet (ﷺ) spans 11 pillars long and 9 pillars wide and these are all also notified with a sign in arabic calligraphy, and within this space are the following pillars of history: 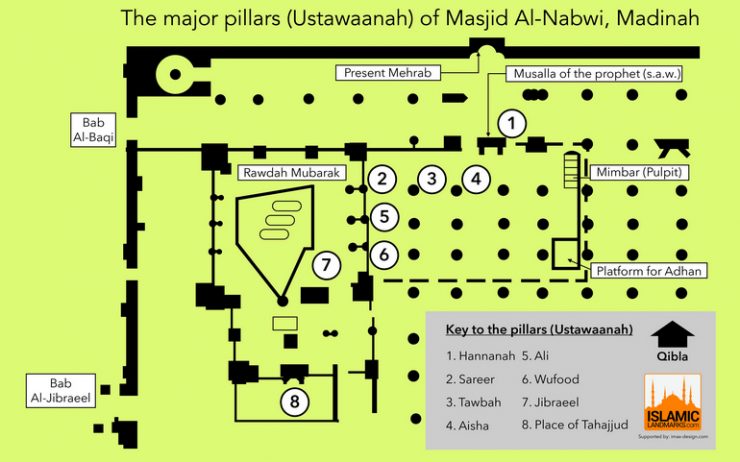 (A view of the old section of the masjid, put together by islamiclandmarks.com)

Pillars of the Prophet’s Mosque

1) The Pillar of Hannanah Also known as the pillar of Mukhallaq it was at this place that the prophet (ﷺ) used to lean on the stump of a tree and deliver his sermons. When a minbar was made it was this tree that started weeping which led to echoes of cries across the whole mosque. The prophet (ﷺ) was reported to have said “The tree cries because the remembrance of Allah was near it, and now that the minbar is built it has been deprived of this remembrance in its immediate vicinity. If I did not place my hand on it, it would have cried till the Day of Judgement.”In fact, the name hannanah refers to the crying camel, which is why the name is used to describe this piece of the masjid.

2) The Pillar of Sareer It is reported that this is the place where the prophet (ﷺ) would perform i’tikaaf and also sleep during these periods.

3) The Pillar of Tawbah Also known as the pillar of Abu Lubabah, a famous compassion(ra). Before Islam, he had much dealings with the Jews of Banu Quraizah. When they acted treacherously during the Battle of the Trench and were taken captive he told them that they were to be killed by making a sign across his throat. He then realised that he revealed the tactics of the Muslims. At this point he became so guilty that he tied himself to a trunk at this place saying: “As long as my repentance is not accepted by Allah, I shall not untie myself from here. And the Prophet (ﷺ) himself must undo my bonds.” When the Prophet (ﷺ) heard this he was reported to have said: “If he had come to me I would have begged forgiveness on his behalf. Now he had acted on his own initiative, I cannot untie him until his repentance has been accepted.”

He remained there for a number of days, only leaving for salah and the call of nature, refusing food and drink. One morning while the Prophet (ﷺ) was in tahajjud prayer in the house of Umme Salamah (ra), he received thenews that his tawbah had been accepted. Other companions tried to then untie him after sharing the news but Abu Lubabah refused demanding that only the prophet (ﷺ) release him.

4) The Pillar of Aisha (ra) It is said that the Prophet (ﷺ) used to pray here and afterwards moved to the place of the pillar of Hannanah. Aisha (ra) is reported to have said that the Prophet (ﷺ) said: “In this masjid is one such spot that if people knew the true blessed nature thereof, they would flock towards it in such in a manner to pray there they would have to cast such lots”. It is also related that that Abu Bakr (ra) and Umar (ra) used to pray in this place also.

5) The Pillar of Ali (ra) Also known as the pillar of Hars (meaning to watch or protect). This is where companions such as Ali (ra) would stand watch and guard the prophet (ﷺ) until the 67th verse in Surah Ma’idah was revealed stating “And Allah will protect you from the people”.

6) The Pillar of Wufood Wufood refers to delegations and this is where groups of people would arrive in Madinah and sit to meet with the prophet(ﷺ). Here they would converse and learn Islam.

8) The Place of Tahajjud It is at this place that a carpet was laid out for the prophet (ﷺ) and where he would pray tahajjud after the people had left the masjid. This space is now covered by a bookcase but old photos can show what was behind.

If you have the opportunity do explore the masjid and remember the significance of where you are and the history which took place in this very place!

Did you learn something new about the Prophets Mosque?